Gyllenhaal helped cut a green ribbon with co-star Annaleigh Ashford, and his name will adorn a plaque commemorating the event. 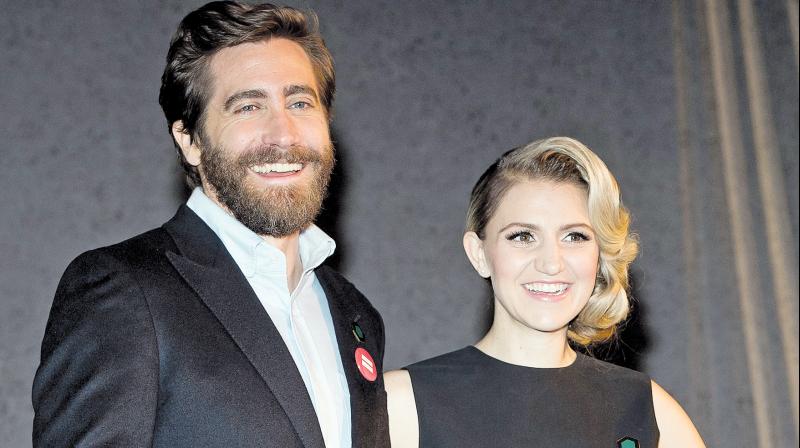 All eyes were glued on the oversize golden scissors that Jake Gyllenhaal, the star of Brokeback Mountain and Nightcrawler used to reopen the Hudson Theatre with Sunday in the Park with George, the venue’s first theatrical production in nearly 50 years. An elated Gyllenhaal said said, “I can’t stress enough how important it is to have joy in this world and that’s what this space is and that’s what this show is all about. It’s all about love and joy so I hope people will come and experience that with us.”

Gyllenhaal helped cut a green ribbon with co-star Annaleigh Ashford, and his name will adorn a plaque commemorating the event. The ornate, refurbished theatre wasn’t quite ready for its close-up, with garbage cans still stuffed with plastic lying in the lobby and some signboards still needing to be hung.

Opened in 1903 — a week before the New Amsterdam Theatre — the Hudson is both Broadway’s oldest and newest theatre. It’s the first new Broadway theatre in almost 20 years and becomes the 41st such venue.

The Hudson sits just off the Times Square — east of Broadway on 44th Street. The theatre opened in 1903 with a production of Cousin Kate starring Ethel Barrymore. It was built by producer Henry B. Harris, who died aboard the Titanic. It was lost to foreclosure in 1933 and sold in auction for $100,000.

The Hudson changed hands many times and was a studio for CBS Radio. It was the home for the first nationwide broadcast of The TonightShow starring Steve Allen and was home for a time to The Price Is Right. It later became a house for burlesque and then a movie house in 1968.

As a theatre, it hosted Andy Warhol’s My Hustler in 1968, Lillian Hellman’s Toys in the Attic with Maureen Stapleton and Jason Robards Jr. It ceased being a home for legitimate theatre in 1968.

Gyllenhaal and Ashford will share the stage that once was used by performers such as Laurence Olivier, Louis Armstrong, Jane Fonda and Barbra Streisand, who made her first televised performance from the Hudson.

“We are outrageously honoured to be reopening this special space with this special piece of art,” said Ashford. “We feel the ghosts of those that were before us, living and breathing and inspiring us.” The revival of Sunday in the Park with George starts previews from Saturday.