Ragini Devi: The first American female dancer in the male bastion of Kathakali

Born in Michigan in the US in 1896, as Esther Sherman, she had been deeply fascinated by Indian dancing from the age of eight. 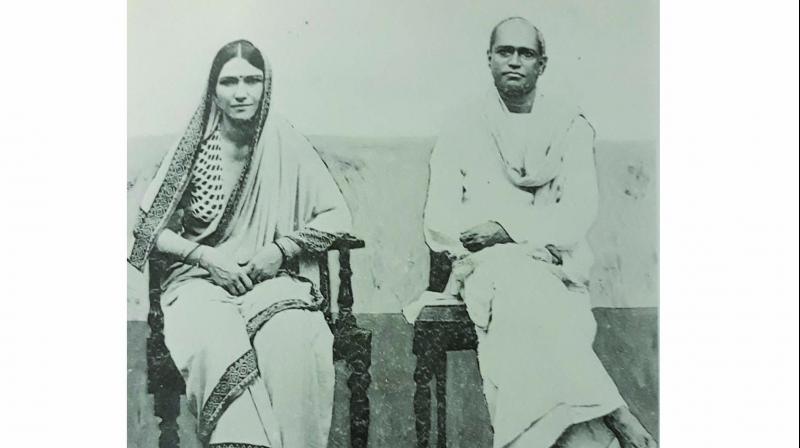 Ragini Devi with the poet Vallathol at Kerala Kala Mandalam.

Very few would know that it was Ragini Devi who was the first American female dancer who stormed the male bastion of Kathakali dance, persuading the great poet Vallathol to let her learn it at Kerala Kala Mandalam in the early 1930s! Within India it was pioneers like Mrinalini Sarabhai and Shanta Rao who had ventured to mastering Kathakali and performing it with exactitude. But for an American dancer, this was a bold step.

Born in Michigan in the US in 1896, as Esther Sherman, she had been deeply fascinated by Indian dancing from the age of eight. As a teenager, with the help of a Sanskrit pundit, obtaining copies of the Natyasastra and Abhinaya Darpana, she attempted to study these texts and often at social functions presented her own versions of Indian dances with help of Indian students living in New York and using Indian musical instruments.

Her passion for Indian danceforms was further ignited when she saw a presentation (as a slide show) of Kathakali by the scholar Dr James Cousins.

Esther believed that in her previous birth she was an Indian and was irresistibly drawn to India and wanted to visit India. It so happened that she met Indian physicist Ramlal Bajpai, whom she married and she thereafter changed her name into Ragini Devi. An Indian friend of hers arranged her dance tour in India through Madan Theatres, and despite her husband’s warnings, she left by ship for India. At Marseilles in a ship tossed about in stormy weather, she fell ill, which was aggravated by her pregnancy. On reaching Madras (now Chennai), she stayed with friends and concealed her pregnancy, and studied abhinaya under the legendary devadasi Mylapore Gauri Amma. She also studied Jatiswaram and Tillana.

The little daughter she gave birth to was to become the famous Bharatanatyam dancer Indrani. Reams have been written about Indrani and her colourful life, having trained in Bharatanatyam since childhood from Ragini Devi and then Chokkalingam Pillai, marrying an architect at a young age named Habib Rahaman, and when barely 20, she became Miss India.

Ragini’s sojourn in Indian dance is quite fascinating. She was offered a week’s dance engagement in the Royal Opera House in Mumbai, where she took with her five-year-old Indrani and hired a room at Sea Green Hotel, near the seaside. With rigorous practice she succeeded in creating favourable impressions and received excellent reviews with wide publicity along with her photographs in newspapers as “a pioneer dancer from America creating awareness of the great Indian dance legacy”. As her good luck would have it, Ramlal Bajpai’s friend arranged Ragini’s performances at Allahabad, Delhi, Kanpur, Lucknow, Pune and many other places in Maharashtra.

In her biographical sketch, Ragini mentions that she found the climate of Pune so invigorating that she hired a bungalow and servants and also a Pathan as a security guard! But the most hilarious description one finds is about her travelling with her entourage of musicians and baggage, when she came across bullock carts carrying big posters advertising her forthcoming dance recitals accompanied by loud brass bands! People stopped to look at the strange cavalcade in tongas — looking like a circus party coming to town.

The shows in Maharashtra were followed by shows in Hyderabad and Ahmedabad. In Ahmedabad, she picked up learning dances like “the kite dance”, “the snake dance” and “the Marwari dance”. But Ragini’s long cherished dream to visit Kerala, the home of Kathakali, was fulfilled when she received an invitation from the Maharaja of Travancore to dance in the Arts Festival. She got an opportunity to meet poet Vallathol and pursuaded him to let her study Kathakali, which only male dancers were studying at the Kerala Kala Mandlam. The poet relented on seeing her passion, and Ragini stayed in a hut, slept on the floor, put on sari in a manner as Kerala’s women wear, took simple food and practiced very hard to master the technique from the great gurus known as “asans”.

At Travancore, she had seen that marvel of a Kathakali dancer named Gopinath, trained at Kerala Kala Mandalam. Handsome and commanding a great stage presence, Gopinath was a well known dancer. Ragini invited him to be her partner. Gopinath made certain changes in his Kathakali costumes, with minimal make up, wearing a crown and ornaments and Ragini also wore appropriate female costumes for herself. Both of them performed dance numbers like “Shiva-sringar-tandavam”, “Lakshmi-Narayana-Nrityam”, “Radha-Krishna-Nritya” and “Sita Haran”, which became popular. She also gave lecture-demonstrations to communicate with audiences. As an American female dancer, she drew a lot of attention in the media too.

With simplified Kathakali costumes and make-up which was not too protected nor time consuming, the musical effects were deftly used to build up the mood, the rasas of the episodes on the stage — their shows were well received. Ragini, during her travels, gave lec-dems at various universities. She was overjoyed when Gurudev Rabindranath Tagore invited her to perform at Shantiniketan. Seeing their Kathakali performances, Gurudev Tagore was inspired to invite Kathakali dancers from Kerala Kala Mandalam to Shantiniketan.

Ragini Devi’s name has been clubbed with American pioneers like Ruth St Denis, La Meri, the dancers from the West with a deep interest in Indian dance and who became catalysts in reviving Indian classical dances.

Ragini, when she returned to America, performed in various universities and was invited to give lec-dems which popularised Indian classical dances in the US. She wrote a book in English, Natyanjali, published in New York in 1928, which was the first of its kind and perhaps the only book on Indian dance available in English. After successful tours of the US, Europe, and performances in London and Paris, she returned to India. She also studied Kuchipudi and had seen the Maharis of Odisha performing Odissi dance. She was an ardent devotee of Indian danceforms. Under the Ford Foundation Grant, she wrote the book Dance Dialects of India, which though written decades ago is still highly informative, enlightening and comprehensive.

Ragini Devi realised many of her unfulfilled dreams through her gifted daughter Indrani. Ragini used to stay in Mumbai. I had met Ragini Devi when she was quite advanced in her age and was staying somewhere in Bandra. I was conducting lec-dems for Sur Singar Samsad’s annual festivals. I informed Dr Mulk Raj Anand, the renowned author and editor of Marg art magazine and Brijnarainji, director of Sur Singar Samsad, about Ragini Devi and she was honoured during the festival for her contributions to Indian dance.

In her old age, Ragini Devi was supported by Indrani, but staying in Bandra, a suburb in Mumbai, she was not being looked after. Dr Mulk Raj Anand, Harindranath Chattopadhyaya and other eminent citizens arranged for her to return to the US and she was taken care of at “Actor’s Home” in New Jersey. Started in 1882, Actor’s Home is a unique institution where old and needy actors, dancers, musicians and the like are looked after.

During my visit to New York in 1981, I went with Bharatanatyam dancer Maya Kulkarni to see Ragini Devi. She was not keeping well. A few months ago, the Asia Society in New York had presented Ragini Devi, Indrani and Indrani’s daughter Sukanya in a brief presentation of three generations of dancers. That was a very moving event and admirers of Ragini Devi and Indrani paid tributes to Ragini Devi for her services to Indian dance.