More than 80 paintings are on display featuring the faces of the state's opioid epidemic. 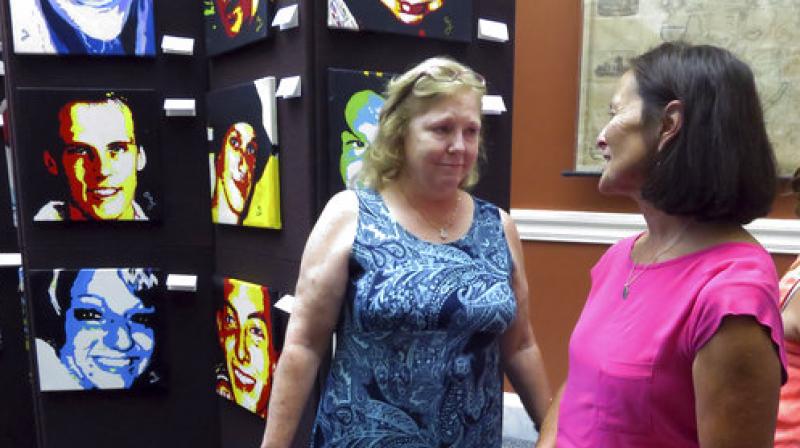 In this Thursday, Aug. 10, 2017 photo, artist Anne Marie Zanfagna, left, speaks to Heidi Maddock in front of her display of portraits at the New Hampshire State Library in Concord, N.H. (Photo: AP)

Concord, N.H: At the New Hampshire State Library's latest art exhibit, the bright smiles and bold colors of the canvases belied the broken hearts of those who attended its opening reception.

More than 80 paintings are on display in August featuring the faces of the state's opioid epidemic. What started as one mother's private outlet for grief has grown into a larger effort to comfort others and reduce the stigma of addiction.

"It really puts a face to the illness," said Heidi Maddock, of Newcastle, whose 32-year-old son, Jared, died in July 2016. She and her husband, Scott, attended the reception last week to see his portrait and dozens of others painted by Anne Marie Zanfagna. "If you look at the eyes, there's just something in each of their eyes that speaks, maybe not to someone else, but to us as parents, it does," Maddock said.

Zanfagna, of Plaistow, didn't paint for more than six months after her daughter, Jacqueline, died in 2014. But wanting to remember her daughter's beauty and vibrancy, she experimented with a posterized style featuring bright pinks and purples contrasting with stark black and white.

"She liked those colors, and I like color a lot," Zanfagna said. "It just popped. It was like, 'Oh my god, that's beautiful. That's her.'" Zanfagna began getting requests for portraits after she brought the painting to a grief support group, and the requests poured in after NPR featured her story in 2015. She started a nonprofit organization called Angels of Addiction to raise money for scholarships and addiction recovery resources, has traveled to Washington to promote it and is working on a book combining her portraits with poetry.

"I just felt I had to do it," she said of painting the portraits. "Also, it is peaceful for me because painting is very calming, it takes me someplace else. I'm very happy when I paint, even though it's a sad subject. I try to make them look beautiful for their loved ones."

In the photo he wears around his neck, Joe Fitzpatrick's daughter, Molly, has curly reddish hair. But in her portrait, the 38-year-old's curls are blue, green and black, and there's a touch of red in her eyes. Molly died in June 2015, leaving behind three children. "It's hard to explain the feeling I get," Fitzpatrick said as he looked at the painting. "You don't want to be proud, but ... I don't know. It's overwhelming, let's put it that way."

Fitzpatrick, who said he, too, has struggled with addiction, wants to help Zanfagna spread the word. "This epidemic is just so powerful, it's so big, you just get drawn into it," he said.

In a recent report, Dartmouth College researchers said New Hampshire's disproportionately high rate of opioid overdoses is the result of prescription practices, underfunded and scarce treatment options and the state's proximity to the drug supply chain. The state's death rate due to synthetic opioids, mainly fentanyl, increased by nearly 1,600 percent from 2010 to 2015. In 2015, the most recent year for which federal data is available, there were 24 such deaths per 100,000 residents, the highest rate in the nation and double what it was the previous year.

Among those who died that year was Christopher Honor. The 22-year-old's death in September 2015 came less than a year after his girlfriend's fatal overdose. Both of their portraits are part of the exhibit, which is open through August 29. "I just want people to come and look and see the pictures," said Honor's mother, Amanda Jordan, of Salem. "He never looked like he did drugs. He wasn't living under a bridge. He held a job. It could be anybody. These pictures could be anybody."

Regina Barker, of Cornish, agreed. She praised Zanfagna for "capturing the essence" of her son, Dane, who died in May 2016 at age 33. "I see all of these faces and I feel less alone," she said.