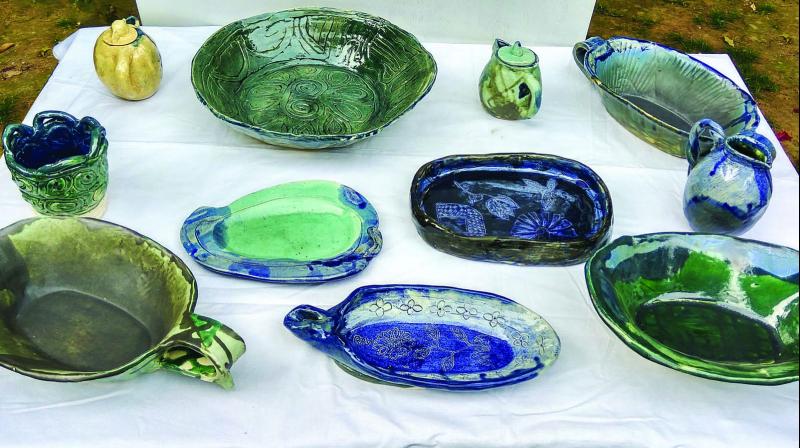 Household products created by the kids.

For several years visual artist Probir Gupta worked on projects to sensitise young adults from privileged background about issues of child labour, adoption, women issues and others. In 2004, while doing a couple of projects with college students in collaboration with UN Women on issues like disappearance of livelihood and crime against women, he got a brainwave.

Tiny hands create household products
“Since the projects required a lot of research, documentation both in text and images, and speaking to the survivors, I decided to work with the underprivileged directly,” he says. The idea resulted in the recently concluded exhibition in the city, titled “Shape — Art For Social Change”, which showcased household ceramic products created by underprivileged children from NGOs like SPID, Salaam Balak Trust and Udayan Care, made last year.

“I taught them pottery and not photography and painting, which are my forte because I wanted them to learn a skill for sustenance,” he says. The children made around 200 usable objects such as glasses, serving bowls, teapots, serving trays etc. “The quality is very high-class for a purely handmade product and I have not allowed them to finish the product to a tee as I wanted their innocence to reflect in their creations,” says Probir.
He is presently looking for outlets for sale of the products and one can currently approach his NGO Muktangan to buy the products that range between Rs 300 to Rs 3,500.

Besides the children’s works, also on display were artworks by well known artists like Vivan Sundaram, Bharti Kher, Ravi Aggarwal, Subodh Gupta, Sumedh Rajendran and others. “I wanted a launch for those products and it was overwhelming for the children and me to see so many takers for what they had made. The kids needed that confidence,” he says on an emotional note. He continues, “I got to know their stories but from the NGO people because for me it was important that at the studio while making those products, it should be like a process of meditation for them.”

He adds, “To have established artists on board gave the exhibition more weight and everyone I approached agreed to show their solidarity. My mission was accomplished when artworks by both the kids and artists got equal attention and accolades.” 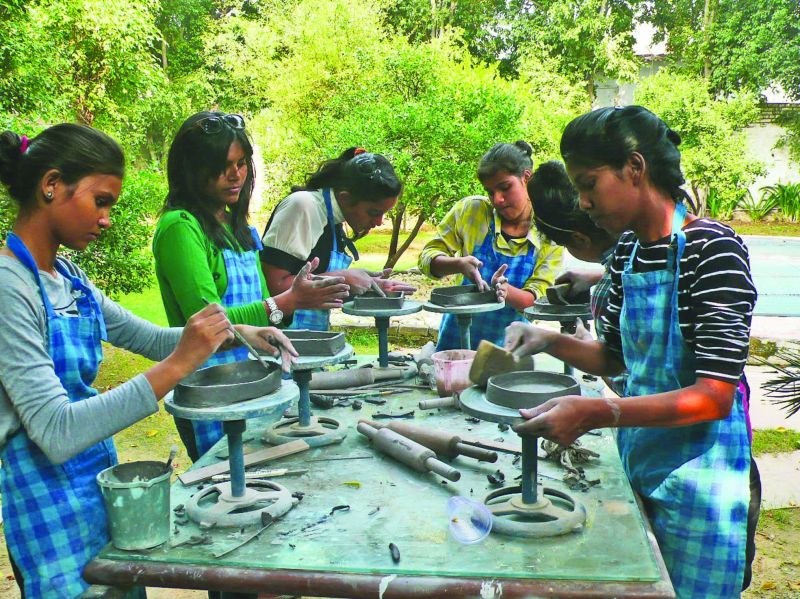 Kids busy at a session conducted by Gupta.

Changing artistic language
Probir believes in fusing various mediums of expression. “The language of art has shifted from aesthetics and beauty to being issue-based. The shift came in other parts of the world much earlier. In India, the change began to take place around late 1990s. In today’s artistic language, there is no restriction on the number of mediums you can choose as the idea is not to be aesthetic but to communicate because the issue is more important.”

Talking about how Indian artists are perceived today globally and giving them credit for the change in perception and transformation from aesthetics to activism, he says, “If you see the era of M.F. Husain, S.H. Raza, Manjit Bawa, Ganesh Pyne, Ram Kumar and other modernists, they were never invited by curators and museums to participate along with other international artists. When the British opened art schools in India, they didn’t want to make Indian great artists but they wanted Indians to illustrate the British Raj. It was obvious that their expression of art had to be influenced by those schools of art. This gave English artists the excuse to say Indians are imitating them. You can say it was also a reason why artists changed their ‘language’ of art. Now there are no taboos. People like Subodh Gupta and myself and many others have been part of biennale shows by western curators. In the late 1980s, I used to go to Europe with tremendous excitement but for the last decade or so, I don’t feel any excitement because there is equally good art happening in India as well.”

Threat to freedom of expression
Reflecting on how the famous Chinese artist Ai WeiWei was put behind bars, he says he is glad that India is much more democratic. So, how does he see the rise of the right wing vis-a-vis its impact on freedom of expression? He says, “Attacks are happening, be in protest of gay rights or nudity. Filmmaking is also art and see what is happening at FTII, Censor Board, and that attack on Bhansali. It’s  clear that there isn’t much tolerance, and freedom of expression will continue to be curbed. It’s scary.”

What should the artists do then? “Wait and watch. In Iran, artists are all underground. Pakistan and Afghanistan are the same and looking at what happened in the US, I guess Europe will head in the same direction — the rise of the right.”