Writing on the many dimensions of love

Isha Inamdar speaks about her debut novel True Liars, the dichotomy it represents and love which prevails over everything else. 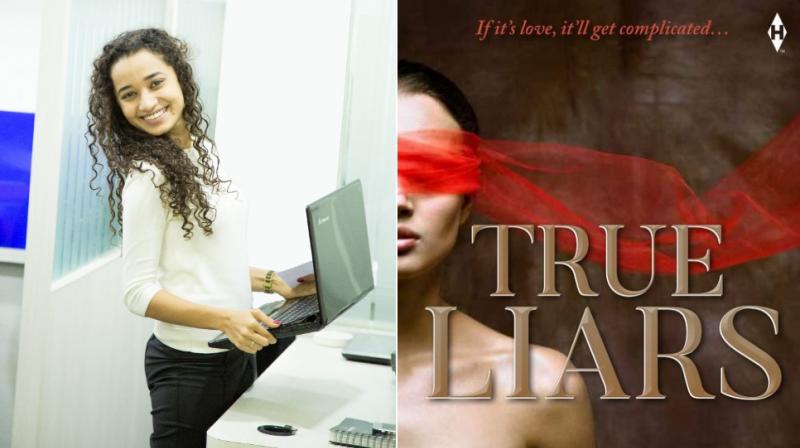 Isha Inamdar and the cover of her book True Liars

What is true love? Is it the affection one feels between siblings, or is it the bond one celebrates between friends? Perhaps it is the bolt from the blue one feels as they gaze intently into someone else’s eyes for the very first time and realise that there is no turning back.

True Liars by Isha Inamdar is one such love story between the vivacious Anjana and the often brooding Rudra Ranawat.

Set in the backdrop of Mumbai and Phalodi (and very briefly Ibiza), it meanders and weaves more within the characters as they tumble through their own demons in search for acceptance, happiness and true love than in the outside world, where each has put on a mask – each play a part far removed from who they really are.

Speaking about how she got the idea for her debut novel, Isha says, “I was in the ninth grade when I had written the beginning of this story,” she goes on to add, “After all this time when I once again took to writing, my characters had developed into mature adults and the plot had thickened panning the story better.”

According to the author the years saw no change in her idea, but perhaps experience changed her approach this time around.

At the very first glance, one cannot help but notice the dichotomy in the title chosen by Isha. She explains, “The love story of Rudra and NJ begins with her lies. Their entire relationship is based on her lies,” she says before adding, “However, even with her lies, she is the truest character in the book! Hence, I felt that the title True Liars was the oxymoron that perfectly explained the dichotomy.”

Romance, to say the least, forms the crux of the novel. Love, in all forms play integral part in taking the plot forward. Be it familial, amorous or platonic, it seems that Isha’s novel progresses through the conflicts, like any good work, that arise out of feelings that each must express or guard as moments progress. The author, not surprisingly, it turns out is a hopeless romantic herself.

“I am a truly hopeless romantic, though not in the traditional sense of romance! To me, love means the passion and the zeal that keeps us together. It is that blast of happiness, adrenaline, joy and growth combined with a little possessiveness, limitlessness and the constant need for more that makes us better individuals.”

Interestingly her protagonist seemingly toes the same lines and Isha wholeheartedly agrees, “NJ is part me! I am short, petite and have curly hair. It is very difficult for me to talk emotionally, nearly impossible to convey what I feel and just how much I feel. Friendship is very important to me and I too would do just about anything for a friend!”

While True Liars trace the love story behind Anjana and Rudra, the other characters in the novel are not playing fleeting parts of fancy, and this is perhaps where Isha excels. Each character has a story to tell and each of them are round in their own way, not exhibiting stock character traits, but rather developing new dimensions as the plot progresses.

Harsh, Rudra’s still-in-the-closet gay brother who sways Anjana into playing his fiancé at a family function is one such example. A cursory reading of the novel might leave readers dissatisfied with his apparent lack of fortitude (is the author stereotyping a gay man?) but the author says that it has nothing to do with his orientation.

“Its how we look at it... he either lacks spine because he is a homosexual, or he is a homosexual and lacks spine! Having said that, he is a character who has always been protected and hopefully with time he'll grow up, as we all do.” NJ on the other hand represents moral highs like courage and truth while Rudra forms the axle set in stone, around whom the story weaves. Around them are characters who help the plot progress like Rudra and Harsh’s sister Kaavya, Harsh’s boyfriend Sam and Kaavya’s husband Dhruv.

Interestingly, for people attempting to read True Liars (it is a good read), the book does not end. Yes, there is the run-of-the-mill conclusion, but the author very slyly puts in allusions that will act as a cliff-hanger.

For the author, to whom literature is a way of escaping reality, where each page is a new beginning, ask her about the ending of the book and she concludes, “Oh yes! True Liars is the first of three books and hopefully you won't have to wait too long to find out Kaavya's story.”