A guitarist’s journey, and the genesis of his pushpaveena

On Saraswati Puja day, the instrument finally took shape, and I named it pushpaveena, in the honour of the goddess. 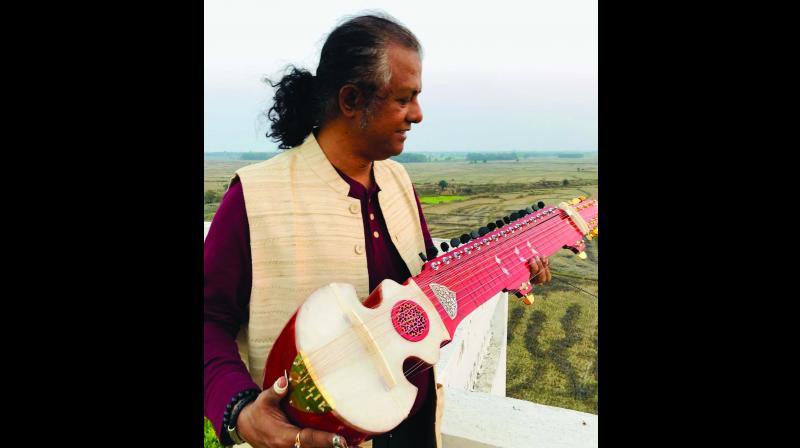 Pt Debashish Bhattacharya with his instrument.

Slide guitarist Pt Debashish Bhattacharya trained in Indian classical music, but taught himself how to play a Western Hawaiian guitar, using the plucking techniques of the West. He was permitted to retain these techniques, even when he later went to learn from Maihar gharana’s slide guitarist, Pt Brij Bhushan Kabra, who played with different plucking strokes.

This interweaving of East and West has been very much a part of Debashish’s journey as a musician, as has been his technically novel innovations on his instruments. Over the years, starting since his early 20s, he completely changed the slide guitar, including the very significant addition of “tarab” strings; in fact, as the ultimate compliment, his Guru too took to playing his disciple’s modified instrument! After the creation of his “chaturangi”, Debashish then made the smaller lute like “anandi” for a different use.

But the search to create something that retained the basic slide guitar techniques, yet had a wider more expansive sound continued. Debashish wanted to go beyond the physical constraints of the wooden structure; as he put it, “all instruments using the slide movement to create sound, whether it’s the gottuvadyam (now called chitraveena) or vichitraveena, are made of wood. Yet the resonance achieved by a skin top, be it on percussion instruments or for example the sarod, is something quite different. My co-creator, US based Tiffany Chin, was also adamant that a skin top instrument would be really unique.”

Finally, the nebulous desire took shape; 18 months later, the newly created pushpaveena was launched at a glittering event in Kolkata recently. As the closing finale to the two-day fifth edition of the International Guitar Festival, the instrument was introduced in the presence of several senior musicians. Pt Ajoy Chakravorty in his remarks on the occasion spoke of the remarkable resonance of the Pushpa veena; he said that was an important aspect of any new instrument, like decades earlier, Pt Radhika Mohan Maitra had created an instrument that combined the surbahar and sarod, named by musicologist Thakur Jaidev Singh, the “mohanveena”.

Sharing his memories in the construction of his new instrument, Debashish said, “I feel the resonance of the pushpaveena is due to the really deep empty hollowed “tumba” covered by the skin, deeper than other earlier instruments. I have also included a hole which adds to the resonance, this has never been done before.”

Hearing the instrument played for the first time, one was struck by the different sounds it can generate. Accompanied by Pt Anindo Chatterji on the tabla, Debashish demonstrated its versatility; in the folk melody he played briefly, the instrument did indeed sound like a folk instrument! I asked the maestro later how that came to be; he said “The nylon strings that I added give that twang, in the South East Asian zither instruments like Chinese harp guzheng, Japanese koto, and Korean gayageum its these strings that brings in the folk instrument sound. But when I play on the 3rd and 4th deeper strings, it sounds like an oud.”

Yet without a doubt, the instrument has been structured to also play all aspects of Indian classical music. There is the depth of the rabab, the ability for “bolkaari” as Debashish briefly demonstrated playing a traditional gat in Raga Bhairavi. Debashish said, “I wanted slide guitarists to be able to reproduce all type of sounds. Slide guitarists all over the world can play this instrument; they cannot produce sounds like this on any other instrument. I also kept ease of playing in mind; the pushpa veena is small and light, and can be played while sitting with ones legs down; there is no pressure on the back or knees. Many times students start to play and hone their skills, but later fall out due to posture related pains. With my many years in the line, I was able to devise an instrument that supports longer sitting time for practice.”

I asked about the physical constraints in manufacturing. Debashish shared: “Tiffany and I spent over a month at the craftsman Manoj’s place Bolpur, outside Kolkata, near Shantiniketan. We created it from scratch; even now I may make minor modifications on it. Currently its pitch is C, but one can take it up to D.”

Debashish elaborated on the lengthy process involved. “We applied for a patent, and got the copyright registered in our name. On Saraswati Puja day, the instrument finally took shape and I named it pushpaveena, in the honour of Devi Saraswati. Incidentally, Tiffany and I are also collaborating on an album, entitled Poetry and Raga, that will be launched soon.”

Displaying his customary humility, Debashish had taken his instrument to present it before senior musicians from all over the world before formally launching it and playing his inaugural preview concert. Joe Mclaughlin, the jazz maestro, called it a “fantastic new instrument” and expressed his interest to hear more recordings on it; Dr L. Subramaniam and Pt Hari Prasad Chaurasia also praised it.

With caution, Debashish has not yet played a full-length concert on the pushpaveena, choosing to play his earlier creation the 24-stringed chaturangi during his concert with Carnatic flute wizard Vidwan Shashank Subramaniam, as a finale to the evening. Truly the lyrical strains of Raga Kedara (Raga Hameeri Kalyani in the Carnatic idiom) enunciated with such deliberation and precision by the maestros brought home the realization that an instrument has to have the innate structural breath, to be able to translate the artist’s vision of music into a reality.