Dancing with the braves at Nagas’ iconic annual Hornbill Festival

Dance is an incredible vehicle of expression and a wonderful entree into culture. 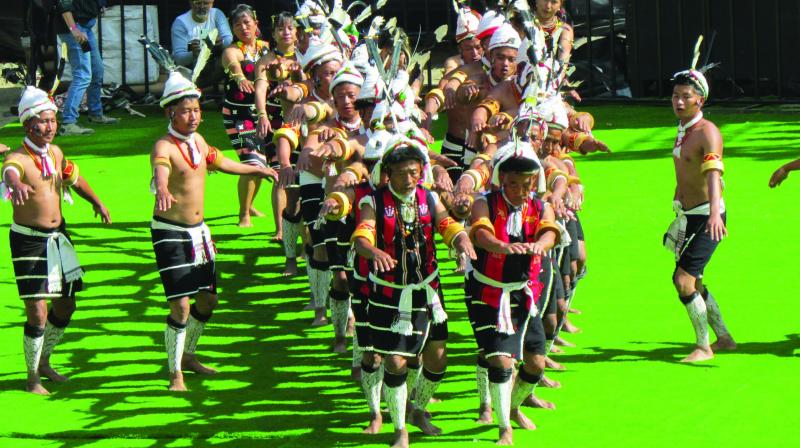 Anthropologists say dance preceded language. The opportunity to have such a feast of dance, music, crafts, food and history packed into this well-organised festival is a gift to the country from Nagaland.

Dance is an incredible vehicle of expression and a wonderful entree into culture.

Imagine 170 unique performances by cultural troupes of 17 tribes from a single state of India! That’s the treasure trove of intangible Naga cultural heritage offered during the annual Hornbill Festival Dec 1-10 annually. It is held at the Kisama Naga Heritage Village, whose nomenclature is derived from the names of two villages, Kigwema (KI) and Phesama (SA), with the letters MA meaning village, located about 10 kilometres from state capital Kohima.

After a few years of trying to attend this festival but always being waylaid by other commitments, I was thrilled to finally get there this year. As a dedicated attendee of decades of Apna Utsavs and Republic Day folk dances at the Talkatora Indoor Stadium in New Delhi, I was delighted to see a panorama of performances completely new to me.

Each of the 17 tribes showcased 10-15 presentations each day during a morning or afternoon one-and-a-half-hour presentation. I have not seen a better-organised festival, especially on such a huge scale, anywhere else in India.  Every cultural troupe is present for each and every performance, seated in locations shared in the festival brochures, and marks their attendance with an opening roll call cheer. Despite the numbers of participants every single programme started and ended dot on time. One afternoon the dances were rescheduled in order to accommodate the audience attending a rare stone-pulling ceremony in a nearby village. People watched or pulled in tribal attire a massive stone on a sled for more than a kilometre as a community celebration of 75 years of Christianity coming to Mima village.

Unlike the presentations of European folk dances that I saw on the proscenium growing up that were re-choreographed for an audience facing front, I was delighted that all the dancers were shared as they were performed during each tribe’s traditional festivals. This means that circle dances faced inward as a community sharing rather than outward to please photographers! The sense of connection and shared bonds of unity in movement reflected the Naga values of mutual support that led one early missionary to comment that there was even more of a “Christian spirit” tradition among the Nagas before conversion.

Sustaining and preserving dance traditions are clearly a successful focus of Additional Secretary, Martha Ritse. Alongside this, Art and Culture Advisor, Khehovi Yepthomi pointed out the new choreographies based on legends, history and traditions which show an organic continuity to the present. An example of this is the Zeliange tribe’s Mount N-Gaulo Cultural Troupe’s performance of Herie Lim, a dance in tribute to the state bird, the Hornbill. Four or more couples sing in praise of the bird as they mimic the movement and flight of the bird.

The warrior dances, harvest celebrations and social dances all display both nuanced as well
as obvious variations between
each tribe. If one watches throughout the festival (difficult to do along with visiting all the morangs, exhibitions, activities, food and pavilions!), you can trace the cultural geography of each– which tribes share border with other states which reflects in their style of movement, which are closer to their cousin tribes as in the southern areas of Nagaland.

A significant number of songs and dances are associated with remembrances of history, such as the Kachari Dhasiri Dimapuri which recalls their ancient kingdom and the river Dhasiri’s role its prosperity. Songs of inspiration, revenge, lovers, of course, and legends offered remarkable insights into other universes of thought.  The flowing movements and weaves worn in the dance by women carry the flavour of their cultural proximity to the Assam border.

The Kuki Khulkon Lam dances out the journey of their forefathers from a subterranean under world of penury, “Khul”, in search of good land. We see the enactment of how they moved through treacherous jungles filled with wild animals, insects and snakes and then confronted the natives of the upper world with military obedience to the leader. They even marched in step to a drum, women and children guarded in the center with rear guards walking backwards. We heard how women and children made noises to scare wild animals and also fought enemies when necessary.

Helo He is a unique dance performed by young men packed together and intertwined in a crouching duck squat linked line. The origin is said to be the advice from a father to his sons to never separate from each other. The song and practice of this dance definitely encourages the youth to connect with each other, with tradition and with the importance of passing on traditions to next generations.

Interspersed with dances were tribal games, traditional rituals. Each tribe had options over each of the ten days to share these aspects of tribal life as well as their dances. These ranged from showing the entire process of creating cloth from stinging nettles to different arts of fire-making with stones, split bamboo and bamboo shavings or twirling a rope of bamboo strips in a wooden shaft with bamboo shavings. A variety of games, some by women and others by men, had high leaps, kicks and feats requiring lots of agility and strength.

It would take a book rather than this article to cover the themes, stories and movement expressions of the Angami, Ao, Chakhesang, Chang, Khiamniungan, Konyak, Lotha, Phom, Pohury, Rengma, Sangtam, Sumi, yimchungru, Zeliang, Gara, Kachari and Kuki cultural troupes performing at the Hornbill Festival. The variety of dances performed by men only, women only and mixed group had interesting surprises, such as Konyak women dancing with rifles and a Chang enactment of a village attacked by headhunters and the reactions of both sides - a big hit with the entire audience. There was even an Angami folk tune called Howe that serves as vehicle to convey messages about status, poverty or wealth, or differences of habits by song that would be disrespectful if spoken.

Dance is an incredible vehicle of expression and a wonderful entree into culture. Many anthropologists say dance for communication preceded language. The opportunity to have such a feast of dance, music, crafts, food and history packed into this amazingly well-organised festival is a gift to the country (and the world) by the state of Nagaland. The people were all so helpful and kind, from Lisapila Anar at Nagaland House in New Delhi who helped me find the ideal homestay walking distance from the village to every participant from cultural troupes to tourism department. I say this because anyone can comfortably attend this annual Dec 1-10 festival on their own, though good walking shoes are an essential!

If you have read this far, you might be interested to know that Nagaland is making great strides in areas as wide-ranging as cinema and IT. The Glocal Hornbill International Film Festival opened with the first Hindi language Mumbai produced film featuring story and actors from the Northeast. Don’t miss Axone, a funny and touching effort to cook for a wedding, when no neighbours can bear the smell, set in Delhi. Nagaland is also striding ahead in IT under the leadership of Mmhonlumo Kikon, MLA, a family-college connection. His major collaboration with Estonia, a country we’ve seen over the years become a powerhouse world leader in e-governance, is already bearing fruits for public access and transparency in state. I say this with pride as now an honorary Naga, having eaten the their hottest chili in the world and danced with the warriors.

Sharon Lowen is a respected exponent of Odissi, Manipuri and Mayurbhanj and Seraikella Chau whose four-decade career in India was preceded by 17 years of modern dance and ballet in the US and an MA in Dance from the University of Michigan. She can be reached at sharonlowen.workshop@gmail.com.