Qadri, a yogi and a poet, remained deeply engaged with spirituality and this reflects in his abstract paintings. 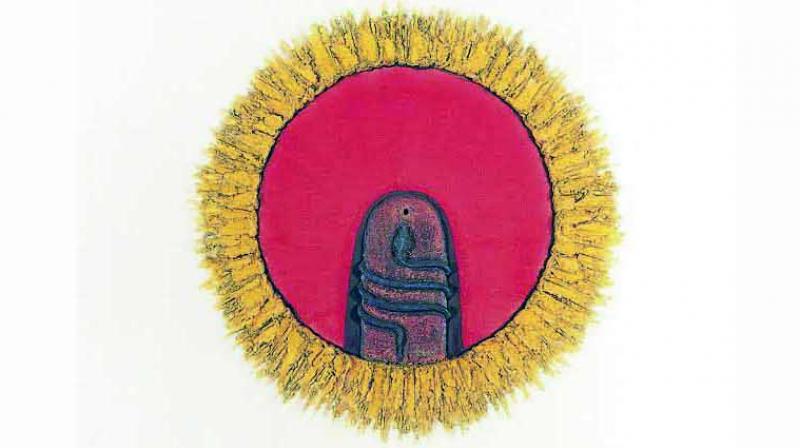 Qadri’s paintings are ecstasy indeed! This exhibition is a tribute to Qadri.

Sohan Qadri was the only contemporary artist, who remained consistent with Tantric philosophy and symbolism through his art works. During his lifetime, Qadri, a yogi and a poet, remained deeply engaged with spirituality and this reflects in his abstract paintings.

Bringing attention to the works of this reclusive artist, Delhi-based Kumar Gallery is showing 50 of his paintings in a solo show titled “Celebration: Paintings by Sohan Qadri from 1970-2010” from January 20 to February 5. The exhibition is a collateral event of India Art Fair and includes oil impastos on canvas and ink dyes and incision on paper works. Many of these works are being exhibited for the first time.

“The exhibition includes oil impastos on canvas from 1970s and ’80s to his later works of the 90s and the new millennium that were done using ink dyes and incision on paper. This is an odyssey of a pioneering Indian abstractionist”, says Sunit Kumar, director of Kumar Gallery. Born Sohan Singh in Punjab, India in 1932, Qadri was initiated at the age of 14 by Guru Bhikham Giri of Phagwara in yoga, tantra, dance and music, and the young Qadri began to draw yantras in the guru’s Shiva temple.

In 1952, he worked as a freelance photographer in Bombay Film Studio but soon withdrew and retreated into the cave temples of Himalayas to practice mediation. In 1955, he came back to study Masters in Fine Art from Government College of Shimla and became Sohan Qadri in devotion to his sufi master Ahmed Ali Shah Qadri. Kumar personally knew Qadri and remembers the artist as a very spiritual person. “He was different he was immersed in

his works as if in meditation. He would work almost 18 hours a day bringing out his myriad musings on canvas”, says Kumar.

Qadri fuses Tantric imagery and late modernist minimalism with ease. Out of the 50 works, 20 oil impastos are on display for the first time. One of the oil impastos show a blazing yellow circle almost like a sun with a red centre. Inside an oblong structure juts out with a serpent coiled around it leading to a very powerful painting. One-way of interpreting it could be how Shiva and shakti unite to form one whole. Or the entire universe is a microcosm of Shiva and Shakti. Another could be that while the life and all its trappings go on as usual, it is the Shiva that we seek — the godliness within. That the path to attain moksha (salvation) is through God or spirituality.

Another untitled painting has a fiery red background with a black crevice within which one can see embers, all percolating to an oval pendulum-like structure resembling Shiva’s third eye. Although Qadri began his career in the 1950s painting in oil on canvas, he worked on paper from the mid 1980s onwards. He covered the surface of the paper with structural effects by soaking it in liquid and carving it in several stages while applying inks and dyes.

Equally fascinating is ink and incision on paper that used black and blue ink that fades out on the edges. The repetition of incisions on paper is almost meditative as it leads to a two-dimensional paper transforming into a three-dimensional work. Qadri’s artworks are also influenced by Europe and Kumar says that Qadri fused two styles and created his own palette. “His colour dispersions are very effective,” says Kumar.

The Kumar Gallery has also come up with a book on Qadri that features his life’s works. Kumar is very proud of the fact and reveals that before his death in 2011, Qadri took a look at the book. “Sitting in his hospital bed in Toronto he even joked with his nurse that ‘now I can die in peace as all my work has been documented’,” reveals Kumar.

Qadri has been quoted in the book: “Painting is a total and complete visual expression for me. I use colour’s full and innocent power field similar to the deep state of meditation — Nirvikalpa. I keep my cleverness and concern down. A painting is not a riddle. It is joy and ecstasy.” Qadri’s paintings are ecstasy indeed! This exhibition is a tribute to Qadri.