Guruji was there for the first 7 years and the first awardee in 1995 was to legendary gotipua guru, Maguni Das, from his own Ragrajpur village. 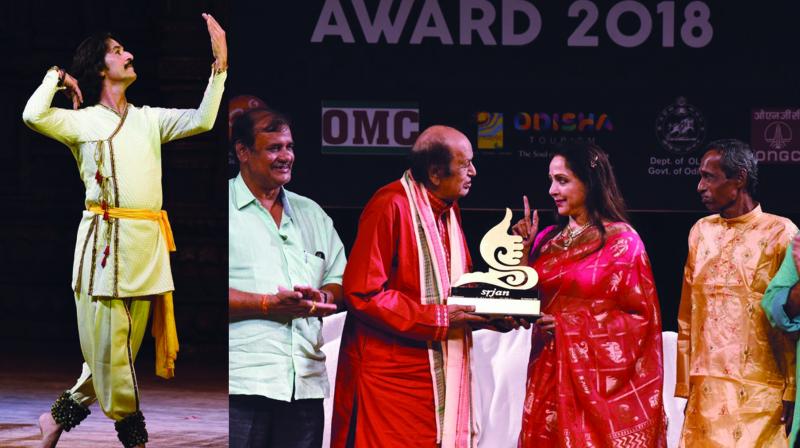 From a one day festival it soon expanded to five days and will next year complete 25 years as one of the most highly regarded dance and music festivals of the country. The focus on promoting arts from around the country and honoring artists was a deep and consistent passion of Guru Kelucharan Mohapatra. He exemplified this in my personal experience in 1976 when he insisted that I also perform Manipuri as part of the Kala Vikash Kendra, Cuttack summer student program. I felt unprepared after only a few years of training, but he insisted that it was important to expose the local audience to other classical traditions.

Ratikant has followed his father’s vision conscientiously bringing the finest artists from diverse music and dance traditions to the Bhubaneswar audiences. In particular, he even makes sure that the music college hostel students get special permission to stay late for the opportunity to see and hear arts that would otherwise be inaccessible to them.

Maintaining consistently high standards of performances in this annual festival over more than two decades is noteworthy. Some national festivals had great artists in their early years but eventually their selection committees were less able to discern or succumbed to other criteria for selection.  Several festivals created by dancers also have inconsistent quality as reciprocity of performance opportunities weighs against excellence. Clearly the OMG GKMA Festival time after time offers only the best performances as Ratikant is not only a dancer/musician/choreographer with discernment in selection, but his Srjan Dance Company is a popular success on its own terms.

The Governor of Odisha, Hon. Ganeshi Lal, inaugurated the festival with extremely apt remarks on the compassionate role of the guru to take the disciple beyond mundane concerns by unveiling how the sharing of music and dance in performance can merge human and cosmic consciousness.

Srjan presentations bookmarked the festival, opening with Rajashri Praharaj’s well crafted traditional Odissi solo presentation. It was lovely to see and hear an absolutely pristinely presented Jagannath Swami entrance followed by Hamsadwani Pallavi performed with flawless technique coupled with the dancer’s innate sweetness. Petite, yet able to command the space with well balanced dynamics, Rajashri used energy with nuances that nicely combined lyricism and power. Her Odissi Ramayana, one of Kelubabu’s non Geeta Govinda tour de force choreographies is a monodrama portraying six characters: Sita, Ram, Lakshman, Maricha as the Golden Deer, Ravana and Jatayu.It was a pleasure to see the impact of the quite evocative mardala and music score and choreography to richly capture and express the various moods and characters, from clever rhythmic variations of the golden deer to Ravana’s muscular efforts. Rajashri’s well etched interpretation demonstrated a command and confidence in solo abhinaya. The pure Odia vocal and instrumental support made for a perfect festival curtain raiser.

The festival finale by Srjan dancers showcased two new choreographies by Ratikant Mohapatra. The Kirwani Madhurima is a music composition by Dr. Vizarsu Balasubramanium with percussion transposed to Odia mardala and the Telegu text re-scripted by Pt. Nityananda Misra. The experimental element is bringing into Odissi Natya Shasta karnanas previously unused by creating the movements between the still points seen in sculptures and performed only by hands or legs while seated. Ratikant feels this contemporary expression may not be purely margam but it gives a fresh, new impact, especially desired by his Bhubaneswar and Kolkata audiences who are “overdosed” on Odissi. At the same time he is very conscious of the need to be humble as he thoughtfully evolves and develops Guruji’s movements.

In his own choreography as well as in festival planning, Ratikant is clearly focused on reaching a general audience without going outside the classical frame. To do so he has concluded that speed and theme are what will successfully entertain 80% of the audience, with the 20% cognizati already inclined to enjoy. A speed of 120 to 170-180 beats per minute requires daily practice by his dancers to maintain a high performance standard and their presentations are well received wherever they perform.

Next to speed, good themes like Ramayana, Jataya Mokshya and Sarbari reach audiences and “Maati”, inspired by a poem by the iconic Odia poet Radha Mohan Gadanayak was the finale of the festival. Longtime theater collaborator Jayadev Das suggested the poem and created the script adaptation. The multi-faceted Laxmikant Palit’s Odissi and Hindustani mixed music composition followed the scripting, with the vocal playing with the Maati pronunciation to convey both Earth and Mother. The humble Earth willingly accepts the burden of sentient beings and is declared queen of the universe after Sky, Sun, Moon, Clouds and Wind demand from the Creator ethereal space. The swift movement in group solos brought home the arrogance of characters and the kaleidoscope movement effects were eye-catching. A well conceived statement on ego and maternal sacrifice brought to life by the capable Srjan dancers who are adding a maturity of expression to their technical abilities.

Odisha being a north-south cultural bridge, audiences were equally receptive to the performing arts of Hindustani and Carnatic traditions. The electrified violin and veena Carnatic jugalbandi of Viswanath R. Kumaresh and Jayanthi Kumaresh offered a bold, yet still meditative experience as they explored Raga Sangeeta. There were thrilling moments reminiscent of Rimsky-Korsakov’s Flight of the Bumblebee and followed by diving down to deeper soul stirring levels.

I would never have imagined a marriage of Carnatic music with Heavy Metal, but that is what Agam, a group of Bangalore-based software engineers who are passionate about the musics that they love are all about. Their high octane performance would add a great masala to any rock concert or dance hall, but it was a treat for performers as well as audience to hear them in a formal concert setting to be able to appreciate the nuances of the Carnatic elements starting from the Guru Vandana and including a Tillana in Dhanushri, Tyagaraja and Swati Tirunal compositions and M S Subbalaxmi’s Suprabhatam. Imagine the appeal to millennials and rasikas of Bhubaneswar seeing guys in black shirts and jeans with shoulder length hair combined with the expressions matching classical vocalizations and gamakas. Solid musicianship made it possible to aim for offering a margi experience through metal /rock.

A third classical Carnatic recital was that of Ambi Subramaniam on violin, beginning with a composition by his father, the legendary Dr. L. Subramaniam in Raag Abhogi and he went on to present a Pallavi in Raag Charukeshi, concluding with a Tillana.  He gave a sensitive and mature performance that nicely balanced the Jaipur Gharana Kathak of Pt. Rajendra Gangani that proceeded.

Entering with a very sweet syncopation and paying obeisance to Lord Jagannath with Jagannatha Swami Nayana Pathagami Bhava Tume, Pt. Rajendra Gangani enthralled the audience as he moved through a Durga Stuti by Guru Gobind Singhji, captivating pure nritta and a restrained and elegant interpretation of Srita Kamala Kuccha Mandala ashtapadi from Jayadeva’s Geeta Govinda. He was inspired to transpose the anga of Guru Kelucharan Mohapatra with Kathak bols of rhythmic flow showing darpana, Ganapathy, peacocks thrilling in the monsoon, srungara, and a delightful Radha Krishna flirtation that delighted the audience. He is a consummate master of his style and well deserved the standing ovation after his final Uthans, Thaats and Parans

A special treat that played a large part in drawing me to attend this year’s festival was the debut Geeta Govinda performance of Partha Sarathi ‘Baboo’ Panigrahi, son of the legendary Odissi dancer Sanjukta Panigrahi and the great classical Odia vocalist Pt. Raghunath Panigrahi. With a deep soulful voice like his father, Baboo enthralled the audience with three Ashtapadis from the Geeta Govinda, Srita Kamala, Mamiyam Chalita Vilokya and Dheera Samire. Growing up with this music, he had not been formally trained and has made a career as a light classical vocalist. Glimpsing the musical legacy of his father in him, I hope he will feel entitled and deserving of continuing his family legacy onward.

My first opportunity to see the highly acclaimed mother-daughter duo of Vyjayanthi Kashi and Prateeksha Kashi from Bangalore was on the second evening of the festival, nicely balancing Baboo Panigrahi’s preceding vocal recital. The variations on Vatsalya Rasa was an ideal blending of their talents to dramatically and aesthetically bring out first the drama and pathos of Narasimha protecting his devotee Prahlad and then the maternal love of Yasoda for Krishna. The first was drawn from the Krishna Leela Tarangini by Sri Narayana Teertha and the second, Jagadoddharana.

Bhumi Sita, specially choreographed for the Award Festival, showed the Vatsalya Rasa between mother and daughter, narrating the feelings of Bhumi towards her daughter through the various phases of her life, her marriage to Lord Ram and especially during her final wish to return to the womb of her mother. The mother, sutradhar and bhoomi on ahigher stage level, created a lovely movement echo of Sita doing her sringar decorations downstage left. Bhoomi recalls Rama who is Narayana had saved her from the rakshasas in the avatar of Vahara, the Boar. Wonderful images performed with total involvement and a sense of ecstasy.

The festival’s aim to expose young and new audiences to appealing classical performing arts adds a particularly impressive and heartwarming aspect by making a point of honoring outstanding senior and young artists with a cash award besides a citation. This year’s NALCO Guru Kelucharan Mohapatra Awards in the fields of Dance, Music, Theatre & Cinema were presented by Hema Malini, a longtime friend of Guru Kelucharan Mohapatra, his son Ratikant and Srjan.

The Rs 1,00,000/- NALCO GKCM Awards were presented to Dr. Sachi Das for his contribution to the field of Theatre and Dramatics and to Sri Lingaraj Behera for his immense contribution to Odissi Dance. Additionally, the NALCO GKCM Yuva Prativa Samman was presented to hearing-impaired Sonali Mohapatra (Bhubaneswar) & Subikash Mukherjee (Kolkata) for Odissi, Swati Sinha (New Delhi) for Kathak and Rohan Suresh Dahale (Mumbai) for Odissi mardala. The awards presentation was topped off with the release of a book of photos on the personal as well as professional life of Guru Kelucharan Mohapatra. Dancing into Eternity - is published by Ratikanta Mohapatra, Director, Srjan. Guruji would be pleased!

Sharon Lowen is a respected exponent of Odissi, Manipuri and Mayurbhanj and Seraikella Chau whose four-decade career in India was preceded by 17 years of modern dance and ballet in the US and an MA in dance from the University of Michigan. She can be  contacted at sharonlowen.workshop@gmail.com