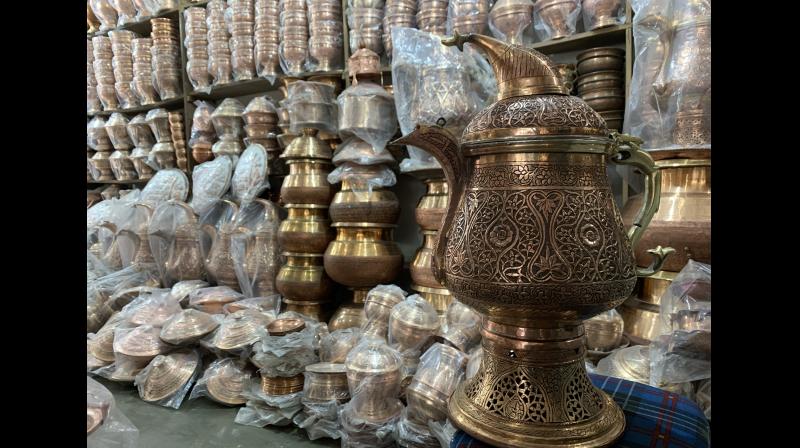 SRINAGAR: The coronavirus pandemic may have caused widespread disruptions, affected health systems and living conditions and pushed many parts of the world into recession.

However, it has also come as  a boon, at least, for Kashmir’s traditional copperware and thousands of people associated with the trade.

Copperware trader Aaqib Javed said, “COVID-19 has pushed the trade by twenty to thirty percent”. Another Kashmiri, Farooq Ahmed, who runs a copperware store in summer capital Srinagar, said, “If Coronavirus has brought misery with it for us, it has, at the same time, proved somewhat catalyst for boosting our trade.”

The Kashmiri copperware is an ancient artwork and the objects are used as household dailyware and also for decorative purposes. The art of casting copperware in the Valley had flourished for years but the trade has received a boost with the outbreak of coronavirus as it is generally believed that the use of copper utensils for cooking and eating helps increase immunity and minimizes cancer risks.

Historians say that the elegant treasure Kashmir possesses was introduced to it by artisans and traders from Iran and Iraq more than seven hundred years ago. Islamic scholar from Persia, Mir Sayyid Ali Hamdani, was instrumental in making copperware popular among the natives.

Geologist and oral historian Jalal Ud Din Shah said, “Copper was in use during the Hindu period in Kashmir too, but only for carving out coins. The first use of this metal for making household utensils and decorative items began during the Muslim period in early 14th century.”

That Valley’s copperware art has its origin in Iraq, Shah argued, is borne also by the fact that many families associated with it back home continue to use ‘Baghdadi’ (natives of Baghdad) as their surname. Sajad Muzaffar who runs a copperware factory in Srinagar’s Zakura industrial area said, “The demand has increased over a period of time and with that a large number of people got associated with it as artisans and traders. My products are sold locally.”

The elegantly designed copper utensils are not only used for cooking and serving food at homes but also at large attended weddings and other functions. As the doctors insist on maintaining social distancing to ward off COVID-19, the traditional Wazwan cuisine is now served at weddings and other celebrations individually in copper plates which have  floral and calligraphic motifs engraved or embossed on them - known as ‘Kandkari’ work in local parlance - instead of ‘Traam’, a bigger plate around which four persons sit to relish the delicacies in chorus and which has been a traditional necessity to ‘practice brotherhood’.

“Until a couple of weeks ago when the marriage season was at its peak, we would work round-the-clock to make these engraved dinning plates and sarposhs (engraved lids) for these. Indeed, COVID-19 has given a boost to our vocation,” said Manzoor Ahmed Misgar, an artisan who also owns a copperware store in central Srinagar.

Sajad is happy to note that perhaps the only silver lining of the pandemic is that “it has improved further the prospects of the trade and, thereby, providing livelihood to more people”.

Mr. Farooq said, “It is better for your health to cook in and eat from copper utensils and dailyware…better than that of stainless steel. Doctors also say this.” Local physicians this correspondent spoke to did not dispute the claim but had reservations about the claim regarding immunity to fight corona like viruses.

Javed Ahmed Misgar, another copperware trader, said that though the market is now flooded with modern kitchenware and dining ware products regularly, many Kashmiri families stick to traditional copperware.

“Now people ask for newer items in copperware, more elegant cooking pots, samovars, trays, jugs and other sundry articles and vases, vessels, lamp-shades and other decorative pieces crafted upon. Thus, the number of artisans and other craftsmen particularly ‘naqashgars’ (engravers) has increased manifold. We now also employ workforce from Bihar, UP and other states,” he said.