A million Sitas in the forest

It was such a joy to see Anita Ratnam’s charmingly choreographed story-theatre performance, which was pulled off brilliantly. 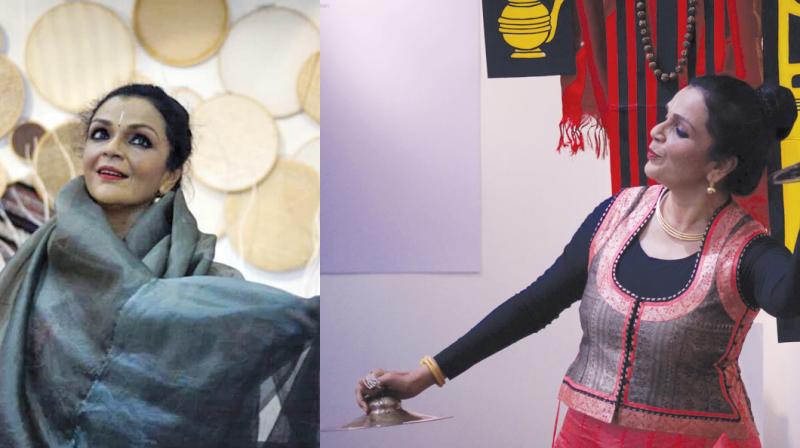 Anita’s consummate ease in Bharatanatyam and stylised theatre movement, both indigenous and trans-national, gave exposition to the warp and weft of the story of A Million Sitas. (Photo: Akanksha Chhetri)

With the opening words ‘a story of power and passion’ heralded by a lilting vocalisation filling the open expanses of the India International Centre’s main art gallery, the audience settled back to luxuriate in Anita Ratnam’s elegant performance, which had some bitter, gritty realities at its core.

Multiple senses were engaged in the service of evoking interwoven stories. Initiated with a focus on Sita and Rama as a love story, we traversed through the betrayal and humiliation of Sita, Surpanakha, Ahalya, and even Manthara, extending to generations of women living within the psychically shared mythic imprints of their stories.

More story-theatre than dance-drama, Anita’s consummate ease in Bharatanatyam and stylised theatre movement, both indigenous and trans-national, gave a spacious and gently relaxed exposition to weaving the warp and weft of the story of A Million Sitas.

At times Anita spoke and, taking off from her words, Sharanya Krishnan sang morsels of well-known Carnatic Rama-Sita classics. Other times they acted in unison playing kartal and manjiras and sharing the central space till Sharanya shifted back to support the action with vocalisations.

This particular performance had the extra magic of being situated within the art installation of Sandhya Raman’s Enchanted Tree. Sandhya is well known for her stunning costume collaborations with senior performing artists and these were seen to good effect in this production, but our senses were pleasantly gorged by the tactile elements of her “dialogue between the Exotic and the Familiar”. The tree itself, with colourful skeins of thread descending from the branches to the floor amidst the incidental movement of tiny birds on threads, was envisioned “as the metaphor to create energy zones that unveil the sensorial treasures of the warp and weft… as oneself, and the emotions that one carries within are the roots”.  Combining the interactive set elements of this production with the textile exhibition treasures was the ideal culmination of Sandhya’s emotional and ethereal connects.

Two traditional back-stories of Shiva’s boons to his devotee Ravana introduced intriguing facets to Sita’s story. Denying Ravana’s request for Shiva to leave Mt Kailash and abide in Lanka he inexplicably agrees to Ravana’s next request: to marry Devi.  Anita wryly suggests his name of Bholenath is certainly justified here. Boon granted, donning a green glove above a lotuses, Anita generates the experience of Parvati transforming a frog in a well into the frog-princess Mandodari who happily becomes Ravana’s queen.

A second boon for a perfect child is one traditional explanation of Sita’s origin. Shiva gave a sour mango to be eaten equally by both Ravana and his queen. Unsurprisingly, Ravana couldn’t resist the desire to eat the whole mango en route home resulting in him become pregnant and delivering a daughter out his nose by sneezing. Mandodari saved this perfect child who landed in Mithila, then discovered by its king, Janaka, as he ritually pushed the plow at the start of the sowing season.

Sita’s chance lifting of Shiva’s bow at the age of ten had prompted King Janaka’s decision that she could only marry a man able to both lift and string the bow. This decision relocated Sita from a kingdom of ideas and philosophy to a kingdom of logic and war when she married into the royal family of Ayodhya. Sita had leaned the wisdom of herbs and their healing along with music from her mother, the queen of Mithila, but the story of the first of a million Sitas positions Sita as restrained and limited within the parameters of her life as a princess bahu.

It was a pleasure to experience the wonderful physical and philosophical interpretation of Manthara.

Moving with a basket held on her back and long stemmed lotus as a walking stick, Anita aesthetically evoked the hunchback and used stylised movement to establish her dynamics. Verbally, she shifted the unexamined view of Manthara as simply a vile instigator to that of, at worst, an effective lobbyist for her political faction to, at best, an apsara sent to disrupt an unremarkable simple love story to provoke mandated events.

Ahalya’s plight was suggestively danced and told as a sari length of grey gradually enveloped the storyteller. To avoid conflicts after the Creator made the most beautiful perfect woman, he gave her to sage Gautam. The sage neglected her as a woman until he discovered Indra enjoying her in his form. The emotionally stony sage, curses Ahalya who has been living as neglected as a stone into an actual stone.

One charmingly vivid choreography was initiated by a silver butterfly worn as a ring interacting with the incidental movement of strings of birds hanging from the enchanted tree before finally landing in the lotus pond.  The butterfly, like all the props used in the production, are drawn from Anita’s personal collection over years of travel, a side note she shared with me as it adds an additional element of integration of time, space and memory to sensory experience.

With a print of Ravi Varma’ s painting of Sita in hand, we are asked to consider whether the sad, lonely and pathetic Sita generally assumed to represented might actually be a woman who is relieved to be free from the restraints to her intellectual and physical freedom at court. Perhaps she is contemplating the peace of sitting under a tree in natural surroundings.

Dancing, singing and speaking to both live and recorded music, Anita shows us a Sita looking forward to 14 happy years in the forest, disbelieving Rama’s wariness of danger and curious to meet the queen of the jungle, Ravana’s sister. Anita transforms into Surpanakha donning long green nails fit for a Chinese empress and an aesthetically elegant black crown, actually a Malaysian devadasi crown seemingly made for Surpanakha.

The other framed painting within the set, a classic Tanjore celebration of Rama’s royal coronation with Sita by his side, canhardly be construed as an honest happily-ever-after in the face of Sita’s earlier betrayal, being suspected and blamed, kidnapped and alone, refusing rescue by Hanuman to await her husband who never came.

Amidst familiar imagery of traditional Ramlila masks by Neeloy Sengupta, who also happens to be an Odissi dancer, Anita in collaboration with Hari Krishnan has choreographed a production designed to inexorably guide us to a fresh scrutiny to consider the women in our shared mythological DNA: Surpanakha — honest and expressive and mutilated for this, Ahalya and Mandodari — where is the justice? And Sita, who in a moment like acid that shocked the assembled army, chose to enter the fire, but asked Rama also “Where is the justice? In your name violence will be wreaked on women”. Countless names, from Shalinis to Nirbhayas, we are all a million Sitas.

It is a huge challenge for art to successfully mesh quality aesthetics and a compelling social or political message, I have written at some length about A Million Sitas because it was such a joy to see this rare feat pulled off brilliantly.

As a footnote, the IIC art gallery is a refreshingly open space conducive to performance. I hope more visual and performance artists will collaborate to synthesise the import and impact of their creative expressions.

I have occasionally enjoyed the magic of performing in gallery spaces in collaboration with European installation artists at Lalit Kala Akademi,in Bangladesh, dancing through powdered paint as part of Alka Mathur and Naresh Kapuria’s joint exhibition and bringing masked dance to life in a personal exhibition of Seraikella and Purulia Chhau masks at the Triveni Kala Sangam in the 1980s.

The impact of Anita’s production also evidences that great art demands as much riyaz in one’s intellectual and spiritual growth as in developing one’s artistic skills, whether classical or contemporary.

Sharon Lowen is a respected  exponent of Odissi, Manipuri and Mayurbhanj and Seraikella Chau whose four-decade career in India was preceded by 17 years of modern dance and ballet in the US and an MA in dance from the University of Michigan. She can be  contacted at sharonlowen.workshop@gmail.com.