Indian theatre’s LED obsession can be traced back to Zangoora, the show at Kingdom of Dreams (KoD) in Gurgaon. 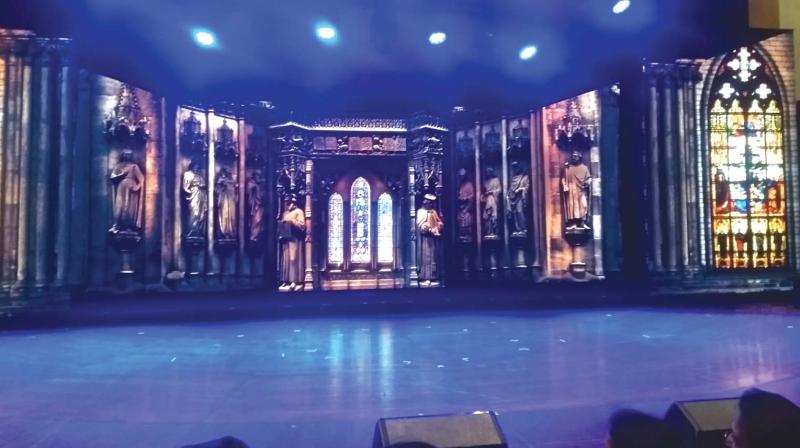 In principle, the LED screen has replaced the old backdrop curtains. Traditionally, a show’s production value used to be measured by the number of changing backdrops it had. Ten years ago, Fali Unwala’s set for The Graduate received rave reviews because of its numerous backdrops.

Projections have always been a tool in the armoury of a stage designer. However, front projection was never very successful because actors invariably would be caught in the projection beam. Back projection meant sacrificing large parts of the stage to allow appropriate distance. And even though newer lenses have allowed shorter throw distances, both kinds of projections still limited the lighting states because any light thrown on the projection surface would ‘dull’ the image. However, with the advent of LED screens, video-based sets have received a new lease of life.

In principle, the LED screen has replaced the old backdrop curtains. Traditionally, a show’s production value used to be measured by the number of changing backdrops it had. Ten years ago, Fali Unwala’s set for The Graduate received rave reviews because of its numerous backdrops. So the basic rule remains. Each new location means a new visual of what is happening on the backdrop. However, the advantage of LED is that the background can be ‘live’. For example, in the recently staged The Sound of Music at Tata Theatre, Maria’s song The Hills Are Alive had clouds moving in the background; something a traditional painted/printed backdrop could never have. The other massive advantage is that location changes are quicker than the cumbersome “fly” system used to switch backdrops.

Furthermore, shows are not bound to venues that have only “x” amount of fly-bars. Now, a unproscenium venue like the Tata Theatre with absolutely no hanging space can have as dynamic a set change as an Andrew’s, Kamani or Jamshed Bhabha.

Indian theatre’s LED obsession can be traced back to Zangoora, the show at Kingdom of Dreams (KoD) in Gurgaon. The show created an almost three-dimensional feeling of indoor spaces after the side wings were replaced by LED. Live actors were suddenly “in” a location rather than “in front of” one. KoD’s follow-up show, Jhumroo, used LED screens in a much more dynamic way. The spirit of Kishore Kumar could leave an actor placed by a LED wing on stage right and travel across the screen and enter then an actor standing by the LED wing on stage left. As an audience, we “saw” the journey of a ghost.

The year 2016’s Beauty and the Beast used a mixture of live sets and LED. In the gargantuan Dome at NSCI, they built the village as “real” tangible sets and the Beast’s castle was recessed further back. It was a mixture of tangible turrets and staircases against LED backgrounds.

Recently, Balle Balle also employed LED screens in a huge way. They replaced the existing wooden and cloth wings at Bal Gandharva with LED screens and were able to give us a variety of locations at the flick of switch, indoor and outdoor. So a road journey that the protagonist takes became akin to playing Grand Theft Auto, with changing and moving scenery to denote the vehicle moving.

A barometer for the popularity of LED could be that the earlier version of Sound of Music, a few years ago, used large sets that were changed by a very capable stage crew at the blink of an eye and the cumbersome revolving stage at the Tata Theatre. This time round, they went for LED screens. While technology and hiring of equipment is still expensive, it does turn out to be cheaper in the long run. If a show is doing multiple performances at different locations, then the storage of hard and clunky sets become a huge issue. Many a production has been compromised with because the set wasn’t stored properly, and thereby when it was reassembled, it required more nails, screws, soldering and multiple coats of paint. With LED the entire set is on a pen drive. The panels are hired from a vendor who owns, stores and uses them for other events in a variety of configurations. On the day of the show, it is simply about installing the system.

We are increasingly living in a more visual time: the age of Instagram. So our sets are bound to reflect that. But the joy of a three-dimensional set design was that it can also represent a psychological reality and tell you more than just where you are. Also, the difference between film and theatre is that the film takes the audience to where it needs them to go, for example, Antarctica or Asgard while theatre bring these places to the auditorium, simply by engaging the audiences’ imagination. So a white bedsheet can be Antarctica or a shaft of light on the floor can become the Bifrost. Therefore, the challenge for the new generation of set designers is how to properly work with LED screen technology so it becomes more than just a purdah backdrop.

The writer is a Bombay based theatre-holic. He works primarily as a theatre-director for arts management company QTP, who also manage the youth theatre movement Thespo.