Born to the legendary Kuchipudi exponents, Padma Bhushans Raja and Radha Reddy, Yamini has got dance in inheritance from her parents. 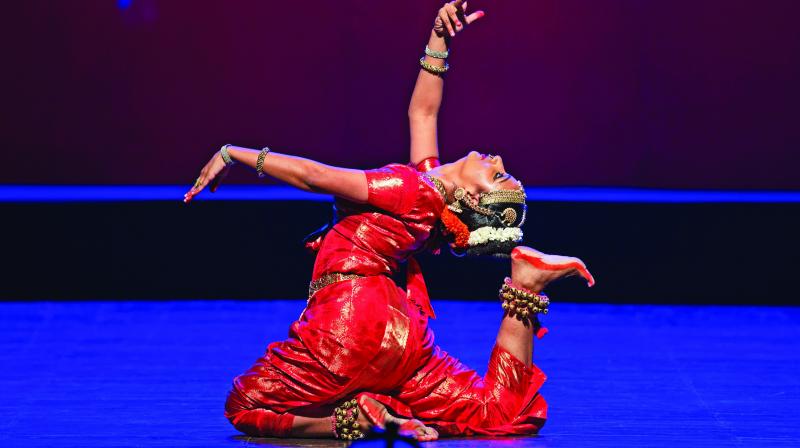 Dance comes as naturally to Yamini Reddy as swimming to a fish. She is a multi-faceted personality, endowed with a sculpted figure, a perfect face and scintillating grace.

Today I want you all to meet an extraordinary dancer who has paved a successful dance journey for herself away from the shadows of her legendary dancing duo parents. After witnessing her performance, Bharat Ratna, the late Pandit Ravi Shankar, had said that she is just made for dance and complimented her by calling her a “complete performer”. I am talking about the very charming and charismatic Yamini Reddy.

Born to the legendary Kuchipudi exponents, Padma Bhushans Raja and Radha Reddy, Yamini has got dance in inheritance from her parents. Dance comes as naturally to Yamini as swimming to a fish. She is a multi-faceted personality, endowed with a sculpted figure, a perfect face and scintillating grace, a very captivating presence with the right aptitude for rhythm and expressions, Yamini Reddy has in abundance all that it takes to be a first rate danseuse.

Yamini learnt Kuchipudi from her parents and gave her first solo performance at the tender age of three in New Delhi that got her a standing ovation. She has inherited her father’s tandava and mother’s lasya, a combination that is very evident in her style. Famous parents can prove to be a tough yardstick for their kids, especially those who aspire to make their own niche in the same field. Yet, Yamini refuses to be intimidated by the tough road in front of her.

Connected to her parents, yet away from their limelight, Yamini opened Natya Tarangini in Hyderabad over a decade ago where she personally trains students in the art of Kuchipudi dance. She is also a budding choreographer, her production “Harmony” along with modern dancer Leah Curtis from New York was well received by the audience and was invited to perform at the prestigious Nishagndhi festival in Kerala. She has collaborated with dancers Gopika Varma, Krithika Subramaniam and actress Suhasini Maniratnam in “Antaram”, a multi-art-form production which features three classical dance styles of the South along with theatre and other arts. Not just that she has also conceptualised and presented “Adviteeyam” and “Shiva Leela”, a Kuchipudi dance presentation along with her talented sister, Bhavana Reddy; she has also authored a research thesis — “Audience Development for the Performing Arts in India”. Apart from that, she is also actively involved in organising the “Parampara Series” music and dance festival in Delhi and Hyderabad.

The lovely Yamini uses her gift of dance to teach others the importance of Kuchipudi, she has toured all over the world spreading the exquisiteness of Kuchipudi and that has made her win numerous awards, accolades and indeed the hearts of many. She has toured the UK, France, the US, the UAE, Southeast Asia, Ireland and more. She is the recipient of a Sangeet Natak Akademi award, the National Bismillah Khan Yuva Purasakar, the Devadasi National Award, the Young Achievers award, the Yuva Ratan and many more.

I have known this talented dancer for many years now and her art is undeniably astonishing and that is the reason why she has been honoured with the title of “Legends of Tomorrow” and has been awarded “The Key to the City” by the mayor of Dublin, Ireland and Ft Lauderdale, Florida, USA. The year 2019 began on a very high note for this full of life dancer as she was awarded “The Iconic women of Hyderabad” title. I spoke to my dear friend on her life and her journey and this is what she had to say:

Another award under your belt… how do you feel?

I feel humbled and truly honoured to receive so many awards during my dance journey and I owe it all to my Gurus, my parents and Raja and Radha Reddy, who have taught me all that I know today, I would have not reached here if it was not for them.

How was it growing up with two legendary Kuchipudi dancers as parents?

I never felt the weight of fame inside our home, for my sister Bhavana and me, the entire atmosphere at home was just normal — we never felt that we were living with two iconic personalities — Raja and Radha Reddy. At the same time, it was not an ordinary home either. Whenever we left for school, we would see them practising in a room, and when we came back we would still find them dancing.

So when did you know you wanted to be a dancer?

Right from the start I knew I wanted to be a dancer, I have grown up seeing my parents dance. Both Bhavana and me have enjoyed growing up in a dancing atmosphere. We always wanted to be like them. We wanted to be dancers.

What according to you is the importance of a good teacher?

I do understand that for today’s children, the so-called modern generation, the ancient form of Kuchipudi might not be that alluring. But I feel that it is the job of a good teacher to make students understand the depth of this ancient art form. We have to nurture them, and make them realise the intensity, strength and power of this fine traditional dance. The responsibility of the teacher is to instil and inculcate an interest and thereafter what happens is totally in the hands of the student.

Recently you returned from a tour of Russia and eastern Europe. Tell me more about it?

If I may say, it was a successful trip filled with dance. I was fortunate that I got an opportunity to perform for the SCO Summit and in front of the First Lady of Slovenia, it was an experience that I will cherish for a long time to come.

If not a dancer, what you would have been?

I was very keen on becoming a doctor. You know, I even got an offer at a medical institute but I knew that if I became a doctor I would never have the time to dance, so I totally gave up the idea and followed the light that my heart showed.

When not on the dance floor, what does Yamini Reddy do?

I love to write, be it poems, short articles and stories, but honestly I don’t think I am proficient enough to publish any of it or at least not for now for sure (laughs).

It has been a few years that that Yamini resides in Hyderabad with her husband, Pingle Srinivas Reddy, and their six-year-old son, Arjun Reddy. However, she completed her entire education in Delhi — she finished her schooling from Modern School, her B.Com. (Hons) from Lady Sriram College and her Post Graduation in Msc, International Business from Fore School.

Yamini performed for various heads of countries at the BRIC and SCO summit in Yekaterinburg, Russia. She has also performed before the President of Hungary during his visit to India, before the First Lady of Slovenia in Ljubljana, her Parampara Series before the former President of India, the late Dr A.P.J Abdul Kalam.

Noted dance critic, Padmashree Sunil Kothari, very fondly spoke of Yamini and said, “Yamini Reddy, daughter and disciple of Raja and Radha Reddy, has emerged as the bright star on the Kuchipudi firmament. I have seen her create the magic of dance with just one number.” Apart from that renowned dance historian, author and commentator, Leela Venkataraman has also praised Yamini’s capabilities by calling her the “ideal disciple” of Raja Reddy on whom he can try all his creative ideas.

Yamini is one splendid dancer who believes that the future of any artist is built on the foundations laid from the past and the present. With the adage in mind, Yamini has decided to master the conventional style of performing Kuchipudi dance. I will not be wrong if I conclude by saying that my dear friend Yamini is the thread of continuity in the family tradition of the Reddys.

Sandip Soparrkar holds a doctorate in world mythology folklore, is a World Book Record holder, a well known Ballroom dancer and a Bollywood choreographer who has been honoured with three National Excellence awards and one National Achievement Award by the Government of India. He can be contacted on sandipsoparrkar06@gmail.com