Bedi agreed and added that art is a reflection of life. 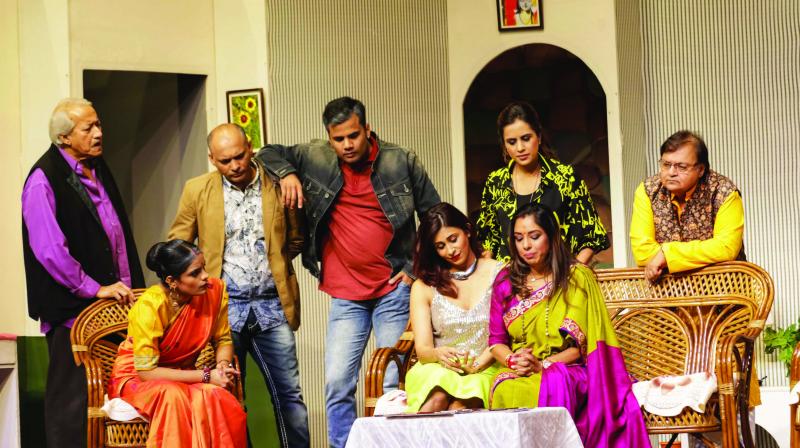 Scene from the play.

The homo sapien is a creature of immense fascination, especially at the time of adversity because, when there are no cards left to play, the mask drops to the ground and all hell breaks loose as thy blessed sapien shows his true colours.

In an attempt to throw light upon society’s double standards, actor, writer, and director Rakesh Bedi recently presented a play called Patte Khul Gaye in the capital. An ensemble of actors that comprised of Rakesh Bedi himself, Kishwar Merchant, Rupali Ganguly, and Anant Mahadevan, performed the play. The plot revolved around a couple, Manoj and Manju (portrayed by Anant and Rupali respectively) hosting a friend and his rich wife Shireen (portrayed by Kishwar Merchant) for dinner. Soon enough, things began to go pear-shaped once Shireen began to expose the middle-class hypocrisy and values and Manju, who took three days to prepare for the evening, was severely affected by this, rendering her unable to serve food to the guests.

On the title of the play, director Bedi, while calling it apt, commented, “It suits the story — I have exposed every type of hypocrisy that exists, throughout this play. We show the opposite and do the opposite. When you know who is who from the inside, everyone is exposed.”

While the cast boasts of actors who are not just renowned in the theatre circuit, but also in the film and television worlds, one wonders what was harder — to direct an experienced actor or a rookie. On that, Bedi responded," “If there is a new actor on the block, I have to focus more on the new actor because I know that the professional actor will do his or her job — you don’t need to tell them much.”

As a viewer, one can relate to the play entirely. Bedi agreed and added that art is a reflection of life. He continued, “What we experience in our society, we show it on stage, and when we show the same, every person can feel that ‘this is my story’. It is a give-and-take relationship with society, you take from it and give it back — it’s a chain that keeps on going.”

It was worth observing how well the dialogues seemed to flow, and the director is to thank for that. He said, “I have an added advantage of being an actor/writer/director — I am an actor first and I understand what is easy for the actor.”

In a world where there are as many mediums of art as there is content, theatre not only has a place in society but adds an everlasting charm to it. The director commented on this aspect, saying, “You get a direct contact with your audience where you get a live reaction, which has a charm of its own.” But being an actor, he continued, “Why should I limit my talent only to films and serials? In order to feel alive, I must do theatre. It is the best way to keep your reflexes and talent updated; your wit is sharpened.”

With every play comes a hidden message and that was most certainly the case with this one. The director pointed out that the entire play is based on the mobile phone. He then called the mobile phone an extended organ of the human body. “The phone is a part of a person and if I sneak into your phone, I am sneaking inside you and I will find something. And even if I find something wrong and destroy relations over it, it is wrong,” he said, concluding the conversation.