Two youngsters have created a backpack that also functions as a sling or a tote. We catch up with these engineers. 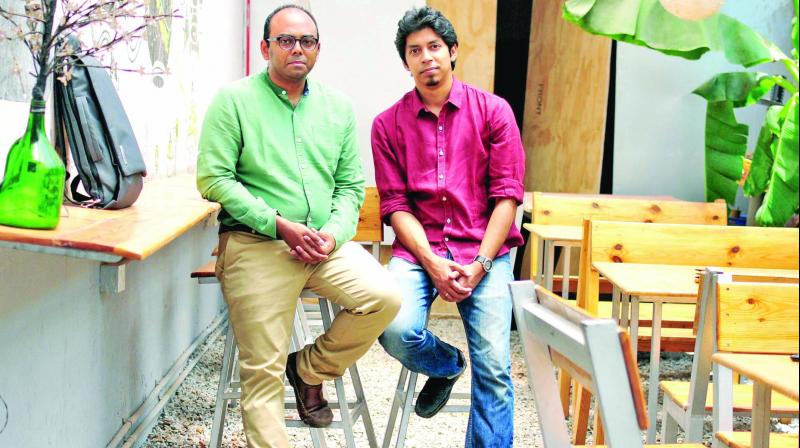 They say necessity is the mother of all inventions. While that might be a mere adage for some of us, for others, it serves as sound inspiration. Take Bengaluru-based mechanical engineers and industrial design alums, Devraj Bhadra and Karan Patel for instance. Having tried to stuff their backpacks on short trips, with more things than it could hold, these 28-year-olds crafted a solution – an innovative bag that can function as a backpack, briefcase, sling or tote, all in one!

The duo, who are also incidentally best friends, always knew that they wanted to touch and transform everyday products. “Bags often make us compromise the way we pack and carry. Sometimes, we get expensive brands that are not functional or we get functional bags that are plain ugly. We often travelled on short trips with our everyday backpacks and realised we can’t pack well,” says Devraj, an industrial designer who worked for companies like Audi and ISRI in Germany before co-founding Meshined Design with Karan.

They always wanted to create ‘something’ cool and ‘something’ everyone would talk about and celebrate. “The concept is based on a flap mechanism that closes in a special way to pack your things in snug,” explains Karan who earlier dabbled in the agro and architectural fields.

With the idea in place, the graduates from MS Ramaiah Institute of Technology then turned to crowdfund their project on Fuel a Dream and they’ve raised more than they intended on – Rs 13, 45, 580. “We believed in making the public our investor and give them ‘something’ they can cherish,” adds Devraj, making sure that the pun isn’t lost on us.

Being entrepreneurs comes naturally to them. “We always wanted to use our training and our beliefs towards creating experiences that we wanted. There is so much to be done, so many things to be designed. We could not think of a better way of finding the independence to make a difference our way,” says Karan.

When they aren’t having chai after chai, brainstorming, they know where they want to be, “We both have the luxury of being the best of friends with the same professional goals. Our aim is to see each other become good and conscious designers,” they chime in conclusion, hoping to one day be ‘something.’