This one-man show was put on by Mukti Ravi Das, who helped with the script writing and generally helped Muzamil in conceiving the drama. 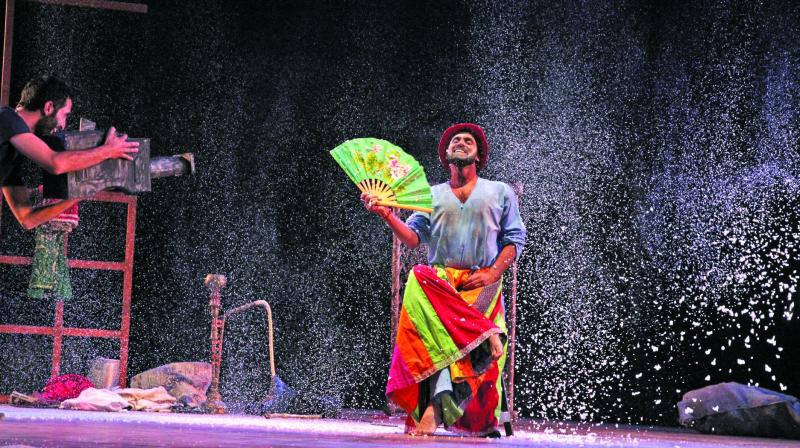 A still from a performance of Black Calendar

Abhimanch auditorium recently saw the performance of the play Black Calendar, which is centred on Kashmir and its problems. Written by a Kashmiri youth, Muzamil Hayat Bhawani, who passed out of NSD in 2014, the drama tries to capture the dissatisfaction and anger of the youth in the turbulent region against the cultural and political situation, and it has no equal in India. Muzamil is inspired by the many moments experienced by the young boys and girls of Kashmir, describing the situation as out of control. However, he is still wary of committing himself to truth of the problem.

Muzamil claims that he was disturbed by the condition of the woman and children in Kashmir and their negative reaction to whatever the young students were demanding. He succeeds in painting a very fine picture of the agitated youth, but women and children do not figure in palpable way in the script. This one-man show was put on by Mukti Ravi Das, who helped with the script writing and generally helped Muzamil in conceiving the drama. The other writer is Bhawani Bashir Yasir, Muzamil’s uncle and head of the Ekta theatre in Srinagar, Kashmir, which produced the play and brought it to Delhi.

Mukti Ravi Das is extremely sensitive and supple as an actor and he does all kinds of acrobatics including intricate movements taken from the folk theatre for its military discipline. He has several scenes with a woman who is his relative in scenes where we see the softer side of the protagonist.

In this episodic collage, scenes take place in the recent past decade in Kashmir. These events are then analysed, and allotted their place in society. There no script was prepared but all the writing evolved from multiple scenes conceived and structured with a dramatic element during the production. Many scenes have a black visual tone and the characters are sketched to build a debate to enrich one’s understanding of suffering people.

Each and every Kashmiri observes a black day in the calendar but the day he or she loses any near or dear one, the whole calendar turns black. The lighting by Muzamil conjured up a painted image with Mukti, who dwelt very convincingly in the light. He was at once the culprit and the victim in certain scenes. His ego was on the rise confronted by the enemy who was a nameless force of violence. By not identifying the enemy, he created some kind of confusion till one realised that the faces of the enemy may be different but the exploitation and anger as its manifestation was the same.

The show was high on emotional content and it worked very well. Mukti was in his element reacting to the situation in varied ways. His playing with the props was novel and led to amusing situations.