Can online trolls be considered as a way of criticism or are they just noise curbing constructive conversation? 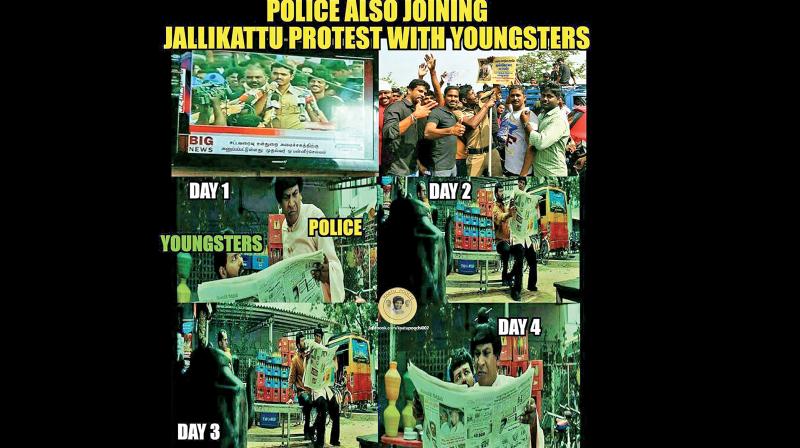 Memes that were circulated during the time of the jallikattu protest.

When Richard Dawkins initially coined the term ‘meme’ in 1976 in his book Selfish Gene,  today’s Internet memes — smiling cats, Vadivelu’s slapstick expressions, and Pepe The Frog — were not exactly what he was thinking of. That’s why he later called these online memes as ‘hijacking of his original idea’. Nevertheless, memes have become one of the most-used elements of the keyboard warriors. The point in case being the jallikattu protests — now being considered by activists and sociologists as ‘one of the biggest democratic uproar in recent times’.

Though the demonstrations are a ground level reality, it all started off digitally with ruthless memes, tweets and Facebook posts, which made people hit the streets. From Prime Minister Narendra Modi to Tamil Nadu CM O Panneerselvam, nobody was spared by the comical, at times, cringe-worthy  memes. Another aspect of the memes is that, unlike constructive criticism, it is one-way communication — the person who is being trolled has no of way of reverting to the criticism.

That’s exactly where the problem lies, according to Devadas Rajaram, a social media/mobile journalism trainer at Asian College of Journalism — “You can’t get back to a troll or meme rationally or reasonably. It is not a conversation. If one trolls a person, it sticks. There is no chance for the person who is being trolled to explain his stand. And when it goes viral, it shapes people’s opinions and in turn,  affects the credibility of the person. So, in my opinion, it should not be encouraged. The solution can be media literacy.”

However, he also admits that in some cases, memes have helped to form a public opinion for good — “More than jallikattu, the impact of trolls on demonetisation is a bigger example. When there was no rational explanation for the move from the side of the PM, the only way people could criticise him was by trolling him. And the memes snowballed into the general opinion among people. The same thing happened with jallikattu. So, like all social media elements, memes are also double-edged swords. You can use them for good and also for bad.”

Dr. Avatthi Ramaiah, a sociologist, and professor at Tata Institute of Social Sciences, echoes the same opinion of Devadas, “Gone are the days when we had someone like Gandhi taking up a Dandi March to resist something. Today at the click of a button, by sharing a post/meme we are able to show our stance and support a particular movement. So, technology has become our modus operandi, even for protest. One can definitely see the positivity that social media is capable of, for bringing people together for change — for the potential it has to mobilise.”

Avatthi Ramaiah adds, “For instance, even during the recent protests, one could see how it was easier for the young crowd to come together using social media tools. But when it comes to memes, there are also chances for internet users to misuse the power of technology. It becomes easy to malign a person’s image and with the easy sharing of memes, by the time one actually verifies the facts, it would have already travelled too far.”

One of the instances, when the tool was put to good use, is when Chennai Memes, a popular Facebook group, took it upon itself to cover the Alanganallur protest, right from the start. The group kept people informed about the proceedings and the arrests in forms of pictures and videos. Gautham Govindaraman, the founder of Chennai Memes says, “Memes are short and crisp like tweets, and it is easily understood and spread. Chennaites are hungry for memes on every issue.”

When asked about the personal attacks on celebrities, he says, “We tried not to take away the attention from jallikattu issues and call out people personally. We asked all the meme makers not to take on individuals. But I know a lot of pages rained down on particular actors. The net is a public domain, and you can’t stop everyone.”

(With inputs from Bhavana Akella)