Rekha: ‘I have never taken any kind of training in dance’

This week is her birthday, and through this story, I would like to wish my most favourite Rekhaji a fantastic year ahead. 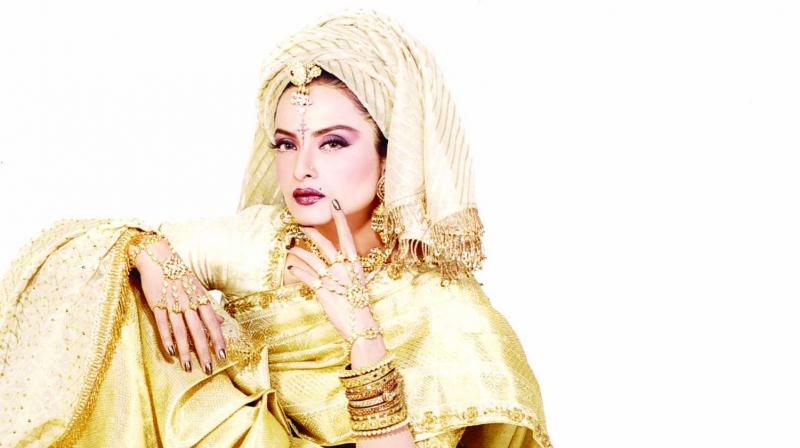 Films, films and more films — this is one medium of art which has been ruling our hearts for decades now. Stars in films have been icons in the past and more so today — they not only epitomise beauty and style but are also fabulous examples of elegance and grace. When we look at Indian cinema and its super gorgeous actresses, one actress that comes to our mind is the one and only diva of Indian cinema: Rekha.

Rekhaji has been a symbol of beauty for almost half a century and there has been no looking back for her since the time she first appeared on the silver screen for the very first time in the 1970 film Sawan Bhado directed by Mohan Sehgal.

Bhanurekha Ganesan, better known by her cinema name, Rekha, is truly considered one of the most beautiful Indian film actresses. She is not only known for her drop dead beauty but is also known for her versatility and acknowledged as one of the finest actresses in Indian cinema. Rekhaji started her career in 1966 as a child actress in the Telugu film Rangula Ratnam, though her film debut as a lead happened four years later. Despite the success of several of her early films, she was often panned for her looks and it was not until the mid-to-late 1970s that she got recognition as an actress.

Rekhaji has acted in more than 200 films in her career spanning over 60 years. Throughout her career, she has often played strong female characters and, apart from mainstream cinema, appeared in arthouse films, known in India as parallel cinema. She has won three Filmfare Awards, two for Best Actress and one for Best Supporting Actress for her roles in the 1980 film Khubsoorat, the 1988 film Khoon Bhari Maang and the 1996 film Khiladiyon Ka Khiladi, respectively.

Her portrayal of a classical courtesan in Muzaffar Ali’s 1981 film Umrao Jaan won her the National Film Award for Best Actress. Talking about Rekhaji, Kathak legend Pandit Birju Maharaj told me “Usski aakhe, ussi adaa, lakho ke baatien karte hai (her eyes and her style speak a million words),” and this is so true when she comes on stage to dance — one cannot look anywhere but at her perfect expressions and adaa (style).

I have met the ultimate diva of Bollywood at a few occasions: first was at the Mr India contest, where I was a contestant, and during one-on-one interviews, when I came face to face with her, I was speechless on seeing her beauty. Later, I choreographed her in my first film Zubaidaa, and then we bumped into each other at many social events. I recollect a few of my dance-based conversations with her and with help of timeless Indian melodies and the magician photographer Jayesh Sheth, I am penning down a few things for you to get a bit of insight into the life of the reclusive and mysterious beauty of Indian cinema — Rekhaji:

Are you conscious that of the fact that you are a superstar?

I am conscious of the fact that everyone thinks that I am a superstar. For me, I am an artiste.

To reach this position has been a difficult path for you.

I got success overnight with my first film, it is only after a few years that I realised that I want to be an artiste.

Your father and your mother both were well-known actors? Did they ever guide you and help you?

Yes, my mother did, but like most actors, if you talk, they will say that they always wanted be to an actor since childhood but in my case it was totally different. I never wanted to be an actor — in fact mujhe toh maar maar ke actor banaya gaya (I was forced to become an actor) (laughs).

When did your casual attitude towards films change?

Only in the 1970s — my first film was a success — I became an overnight star, but for me what was nice is that my school and my friends loved my film, and that made me happy, I really did not know what I was doing at the start.

We all love your dance. Where did you learn your dance from?

You will not believe me, but I have never taken any kind of dance training or have never learnt dance in its literal sense. Everyone in my house, in my family — they dance. My mother, my sisters — all are dancers — but as for me, I never took it seriously. Yes, my mother did send my sisters and me to learn dance in a dance class — I did go to a dance school but I never paid attention in class, so I never got to learn it really. Though I wish that I had taken professional training — then my dance would have been a lot different.

But in films we have seen so many of your legendary moves?

Yes I agree, but for me dance is about feels — how one feels from inside — if you feel it from your soul then woh aapke aang aang mein aa jata hai (it pours out of your body). It is the natural grace that one has which matters and in my family, everyone is very graceful.

You have worked in so many films. Which has been your favourite?

At the start, I did not like any of my films — but in 1975, in my film Ghar —I felt I should start taking an interest in acting. I loved the rape scene in that film and that is when I decided that I should pay more attention to my acting skills.

Till date, dancers from all over the world try to copy your Umrao Jaan moves. Did you take any training for all the tehzeeb and adaa that you showcased so perfectly in the film?

(Smiles) I know it is very difficult to believe — you will not believe it too — but I did not learn the Urdu language or anything of that sort. Umrao Jaan was okay — I do not think I deserved a National Award for it. The best part of the film was its mahol (atmosphere), and because of which it happened the way it did, and in those days I was going through a certain phase in my life, such that it came on my face too. To add to that, Muzzafar Ali was a fabulous painter and because of the textures of the clothes, the background — all were in complete detail — it is because of this detailing that the film became such a success.

There has been much gossip and rumour about you in the media. When you read all about it, how do you feel?

In the beginning, I did not understand anything. I came to Mumbai in 1969, and till 1974, I did not bother, but there was a time when people started to take advantage — they started to paint a picture that was not me. Then from 1975-76 onwards I decided that I will not talk much because what I say is rarely written.

Yes, it is true that Rekhaji rarely speaks to the press, but whenever she does, she speaks from the heart. Her life has been filled with super success and loads of controversies, yet she fought through it all and made a benchmark that no one can touch. Even today, draped in her exquisite kanvijaram sarees, wearing her trademark red hot lipstick when she makes an entry into any event, performs on stage or comes on a television show, millions lose their hearts and minds. That is the supremacy, the power, the mystery and the enigma of the diva of Indian cinema — the one and only Rekha. This week is her birthday, and through this story, I would like to wish my most favourite Rekhaji a fantastic year ahead.

Sandip Soparrkar holds a doctorate in world mythology folklore, is a World Book Record holder, a well known Ballroom dancer and a Bollywood choreographer who has been honoured with three National Excellence awards, one National Achievement Award and the Dada Saheb Phalke award by the Government of India.He can be contacted onsandipsoparrkar06@gmail.com