We glimpsed into the unique creative visions of various artists at this recent exhibition that was held in the capital. 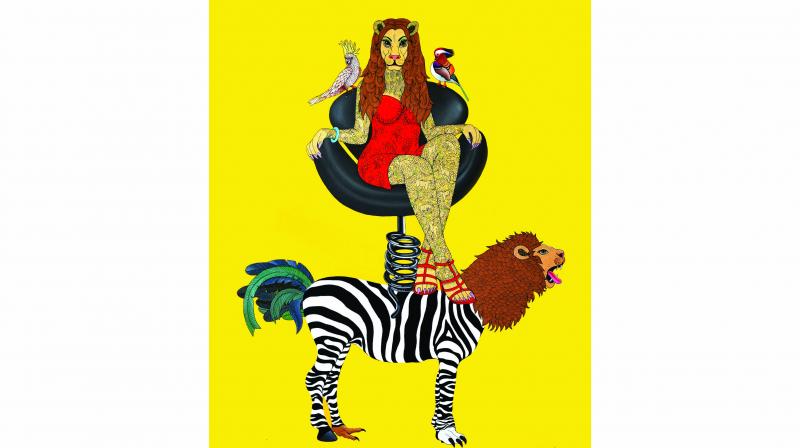 I am Queen by Bandana Kumari

‘Live Unbound’ — when an exhibition has such a name, you know that it will be a complex portrait of an artist and their desire to express themselves adequately on the canvas. Or multiple artists — prominent and upcoming — in the case of this exhibition, curated by Ritu Chagti and Sugandha Chagti, which was recently held in the city’s Modern Art Gallery.

The exhibition highlighted the rising trend of more and more artists working with monochromatic shades in their artworks. Ritu said, “Basically, they have used a lot of subtle colours in the exhibition.”

Sahaya Sharma displayed a set of four paintings called Peak Experience, where the works are made using oil, enamel, acrylic, and brocade on canvas. The collection is inspired by Maslow’s hierarchy of needs pyramid. Talking about her work, Sahaya said, “I make psychologically layered paintings that have the first base layer in enamel. Then I work over them with oil paint. After this, I add translucent layers with acrylic paint and a final misty dimension with the help of spray paint.” She also shared her experience of working with Sugandha, saying, “She’s very kind, young and driven. The opening was received very well. We were a bunch of young minds around talking about Vipassana and the future and need of spirituality. Is it a fad or is it absolutely necessary?”

Ritu also talked about the challenges she faced curating the exhibition, saying, “Collecting the work from the artist sometimes becomes difficult when they are busy or when they are not able to generate exactly the kind of work we want from them.” Ritu also highlighted one standout piece by Komal and says, “She had given 14-15 pieces of installations and her process involves the integration of various objects which she has photographed. Her works talk about women and how despite being in a domestic sphere, a woman can nurture her dreams.” It showcases the world of independence and freedom that women create for themselves.

Vishal Joshi, another artist featured at the exhibition, mostly uses acrylic on canvas as his medium. He also likes to work with charred (burnt) wood and brass. For him, the spiral is a language of communication as spirals can be seen in every aspect of nature. He said, “We see them in vast galaxies, physical forces which shape the earth, the tides of oceans, the winds, tornadoes, structures of DNA, seashells, design of buildings and auto-parts, music, light and within life itself.” In Live Unbound, Vishal has made two chandeliers, parts of his spiral collection.