Modigliani's largest nude to go under hammer, seen at $150 million

Painted in 1917, shortly before the artist’s death at the age of 35, the painting of the woman, believed to be a professional model. 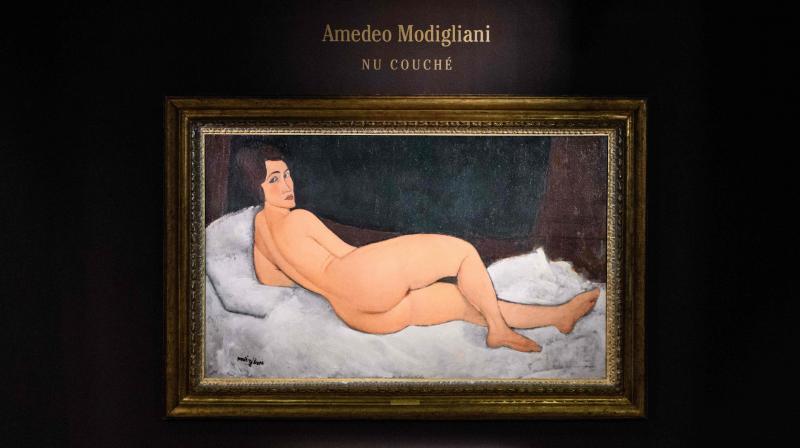 HONG KONG: A painting of a reclining nude by Italian artist Amedeo Modigliani is set to go under the hammer in New York on May 14 with a record sale estimate of $150 million, auction house Sotheby’s announced on Tuesday.

“Nu couché (sur le côté gauche)”, or Reclining Nude (on the left side) shows the entire figure of a woman lying on white sheets, looking casually behind her back and fixing her gaze directly at the viewer.

Painted in 1917, shortly before the artist’s death at the age of 35, the painting of the woman, believed to be a professional model, is the largest in his body of work and described as his “most ambitious.”

In choosing to make the global announcement in Hong Kong, the auction house hopes to tap into what Shaw calls “an increasing demand” from Asian collectors, including those from mainland China, Singapore and Indonesia.

It was a Chinese billionaire, Liu Yiqian, who forked out an eye-watering $170 million for another of Modigliani’s bold series of 22 reclining nudes, which upon their debut exhibition in 1917 prompted the police to shut down the show.

The painting of a nude lying on top of a blue pillow was about $9 million short of shattering the then-record for the most expensive artwork sold at an auction, falling behind Pablo Picasso’s “Les femmes d’Alger (Version ‘O’)”.

The current record-holder for most expensive artwork sold at an auction is Leonardo da Vinci’s “Salvator Mundi”, which was sold over three times its estimate at $450.3 million at a Christie’s New York auction last November.

The rediscovered portrait of Christ holding an orb now belongs to the Abu Dhabi’s Department of Culture and Tourism, and the government said it would display the Leonardo at its Louvre Abu Dhabi museum.