This unique exhibition seeks to highlight the common factor between artist Ravi Varma and the Mahatma, and showcase a part of the country’s heritage. 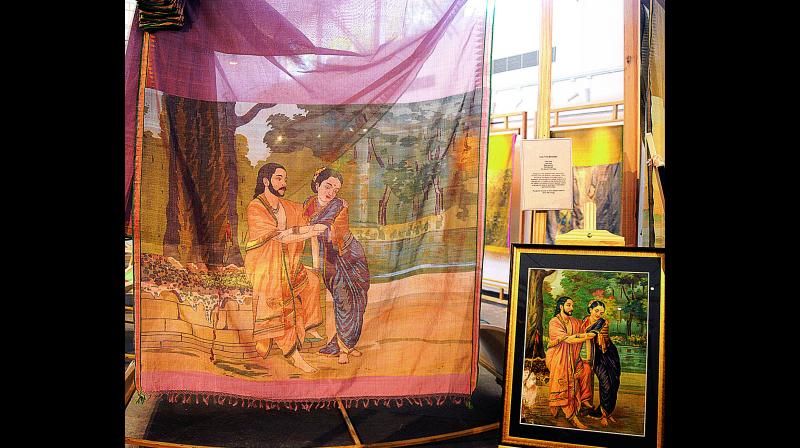 Draped in a pink saree, Padmini, rising from a lotus, is breathtakingly beautiful, as depicted on canvas by Raja Ravi Varma. And now, Gaurang Shah has tried to replicate the effect, not with paints but using threads. This Hyderabad-based textile designer has tried to recreate or reinterpret Saraswati and other iconic paintings of Ravi Varma by weaving the images on the pallus of sarees.

As many as 30 exquisite khadi sarees designed by Gaurang are on display at an exclusive exhibition titled ‘Santati’ at Saptaparni.

Also on display at the exhibition, being held in partnership with the Baldota Foundation, are 30 original unseen Ravi Varma paintings, oleographs and lithographs. The collection was previously on show in the art museums of Mumbai, New Delhi and Ahmedabad.

Each of the sarees is one-of-a-kind, and took Gaurang over three years to create them. Talking about the collection and the effort that went into it, the textile designer says, “The collaboration started off as a tribute to Mahatma Gandhi. It all began in 2017, when I met with officials of the Raja Ravi Varma Heritage Foundation in Bengaluru and visualised the project. I was excited to discover that Gandhiji’s birth anniversary coincided with Raja Ravi Varma’s death anniversary. Both had a connection with khadi — one brought khadi to the limelight and the other used khadi as a medium to paint. This was what led us to the project. We choose some of the lesser-known paintings of Raja Ravi Varma from three categories — women, Gods, and stories from mythology. Eventually, we shortlisted 54 paintings, of which 30 were recreated in the pallus of Khadi sarees.”

Gaurang decided to use jamdani for this project, because of its unique characteristics and versatility. Each saree took several months to weave, and some intricate paintings took more than a year. “Before sending the design to my team of weavers, we drew the paintings on paper to scale with the 42-inch saree pallu width, and outlined every colour accurately, for the weavers to follow the patterns, shades, textures and intricate elements. Every colour in the saree was then decided based on the painting,” he said.

Among the most challenging tasks was to recreate a painting with 20 characters, each displaying different expression, body language and attire. The National Award-winning designer says, “It was near impossible, but we accomplished it to near perfection through our weaving technique.” Every saree is of 150 counts fine khadi, with the yarn sourced from Ganjam Zilla Khadi Gramodyog Sangh. For the Srikakulam Jamdani technique, 200 kilograms of dupion silk yarn was dyed in 600 shades using natural dyes.

“The versatile Srikakulam Jamdani technique made it possible to create the entire pattern without repetitions—the Srikakulam technique involves placing 6m of drawing paper under the fabric which weaver  refers to create the design. Moreover, Raja Ravi Varma used only natural colours for his paintings, in combinations of four primary colours. We opted to do the same with natural dyes to preserve the authenticity.” he adds.

A unique aspect of the project was that Gaurang trained woman agricultural laborers and farmers the art of weaving to realise his dream. The purpose of this project is to make people realise that Khadi is not just a poor man’s fabric, it  symbolises strength, resilience and ambition; it speaks of struggle and perseverance. The idea is to continue preserving this country’s rich heritage and make people aware of what India is about.

Gaurang hopes to display this collection of sarees at international museums after touring different cities in India.