The idea behind the bamboo idol is not only to create an eco-friendly structure but also to promote bamboo craft. 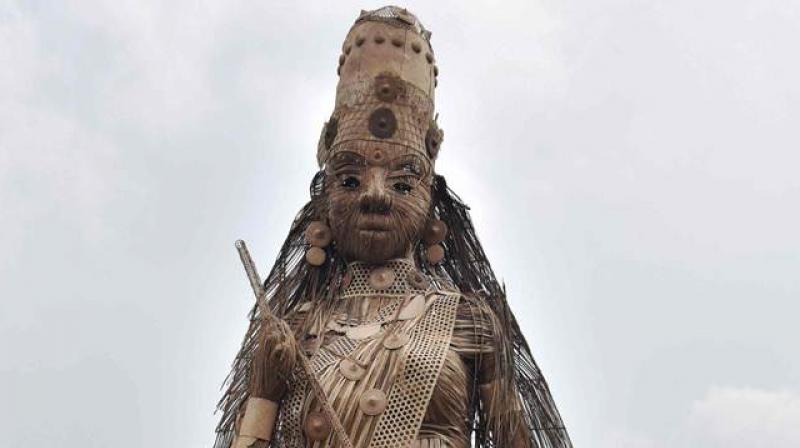 The idea behind the bamboo idol is not only to create an eco-friendly structure but also to promote bamboo craft. (Photo: AFP)

An over 100-foot tall Durga idol is attracting pandal hoppers from far and near and organisers have staked claim for its entry into the Guinness Book of Records as the tallest bamboo structure.

The 101-foot-tall idol by the Bishnupur Sarbajanin Puja Committee has been made by Assams famed artiste and set designer Nuruddin Ahmed and his team.

It was nearly 70 per cent complete when a severe storm destroyed it on September 17. But it was reconstructed within a week by Ahmed and his team.

"The workers were demoralised when the storm destroyed the idol. But we resolved to reconstruct it and ensured that it was ready two days before the pujas," Ahmed told PTI.

"We have already written to the Guinness Book of Records staking our claim that the idol is the highest bamboo structure and are waiting for their response.

"We are sure we will make it to the Limca Book of Records," Ahmed, who has been creating Durga idols since 1975, claimed.

The idea behind the bamboo idol is not only to create an eco-friendly structure but also to promote bamboo craft in other parts of the country and the world, he said.

Nearly 6000 bamboos were procured from lower Assams Pathshala, Chaygaon and Bijoynagar areas for the purpose and will be reused after the festival.

The artiste has also strived to give a definite Assamese character to the structure and the surroundings by using the mask-making tradition of the Vasihnavite sattras (monasteries) of Majuli island and different types of bamboo baskets used in Assamese rural households.

Another highlight of the idol is that the goddess is draped in the Assamese mekhala-chador and not the traditional saree and her jewellery is also made of bamboo.

"This idol is dedicated to the people of Assam who have shown their immense love and recognised to our effort to create this work of art," Ahmed added.

The artiste is known for the numerous sets he has designed for mobile theatres, films, stage plays, tableaux and varied art forms.