This holds true of both Qamar as much as of another artist whose work I enjoy immensely Suhas Nimbalkar. 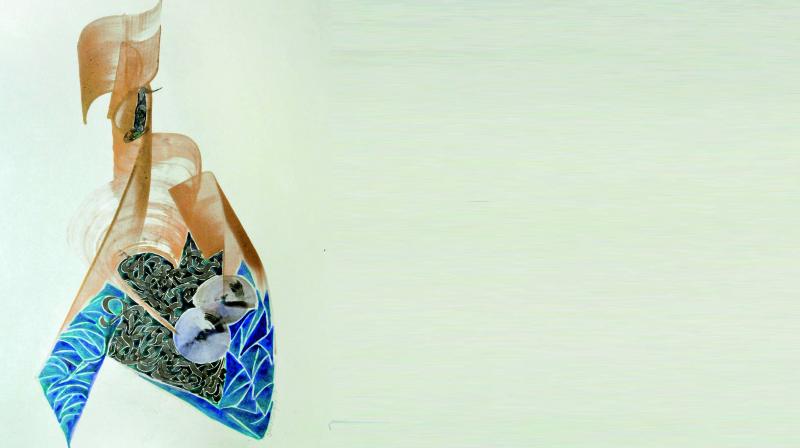 I have always believed that the written word is sacred. There is something so attractive in the sheer way the alphabets in any language lend themselves to telling a million tales — be they as the word or as the context they define that I can continue to remain enthrall with them for hours — it is a matter of both interpretation as of perspective.

In fact, I have very vivid memories of writing with a bamboo reed pen on a wooden takhti or a plank. Even though my school didn’t have them, the takhti was still used in the government school where my mother used to teach in the early 60s. She was convinced that writing with the reed nib was the best way to improve handwriting. I remember how she taught me to sharpen the reed and fashion a pen from it, make the ink in the right consistency by dissolving an ink tablet in water, polish the takhti with a concoction of khadia mitti again with the right consistency of the mud mixture. “Akshar or alphabets should look like pearls,” on the takhti she would say.

How much I learnt and forgot about writing with a reed pen is a moot point but all this came bounding back to me when I visited Qamar Dagar’s recent calligraphy exhibition. I have been watching Qamar’s progress and trysts with calligraphy for quite some time now and happy to report that she has now come to a point when she is playing with the alphabets and they are responding to her bidding. The self-consciousness of the initial years has given way to a more confident idiom and her calligraphic explorations reflect the notion of integrity and resonate with the concept that all manifestations of matter and spirit are ultimately one.

From an intention to write well, Qamar’s objective gradually shifted to nurturing the pictorial possibilities of interpreting scripts — of describing them with meaning and imparting information. In both their unique techniques the basic drawing develops from a thin line, continuing as a thick line and concluding as a thin line, thereby attributing a rhythmic quality to the image.

Her lineage from the greatest dhrupad families makes her genetically and naturally prone to music as it is and hence this show had many works on the theme of music. Their interpretation was as rhythmic as it was evocative and delicate as the music it described and stood for.

Serious studies need to be undertaken to delve into the roots of “creation” by women, to understand feminine inspiration on its own terms, and not as an also-ran of contemporary art, for it possesses its distinctiveness, history, philosophy and indulgence that reaches far beyond the obvious. The collective consciousness merges with that of the individual to bring out universal concerns. It becomes the unifying code within the art historical practice.

“We have to remember that the arrangement of colours and light is an art analogous to the composition of music, and entirely independent of facts. Good colouring does not necessarily convey the images of anything but itself,” John Ruskin, The Stones of Venice, had declared in 1851.

This holds true of both Qamar as much as of another artist whose work I enjoy immensely Suhas Nimbalkar. He paints in the genre that is after my heart — abstract. He is an inseparable part of the contemporary Indian art movement and adept in the art of abstraction. Suhas has been continually portraying the realm of form through a chromatic exploration of space on canvas, which implores the viewer to ruminate the relation of colour and form in his work.

The artist’s painterly expression is rooted in the lush green landscapes of Dhar (Madhya Pradesh) in which he was born and brought up. Living amongst the intense and vibrant colours of the neighbouring villages, he absorbed the hues of the clothing of the tribal inhabitants, their dwellings which were decorated with motifs created with cow dung and coloured using flowers almost as part of  ritualistic practice. This rural celebration of life, along with the magnificent scale of the historical architecture of Mandu, was very much Nimbalkar’s first introduction to art at an impressionable age, the spirit of which is still alive in his works.

Nimbalkar’s recent works presented by Art Konsult on till October 20 are inspired by rocks in and around Hyderabad which he refers to as “Rock-scapes” and his observations of these huge rock formations. The lexicon of form and colour is the very essence of his works, urging the viewer to “listen” to the whisperings of each brush stroke, each contour and each pigment. To “listen” is to go beyond the surface, and to embark on the cognitive journey beyond — which is the true point of art anyways. How many of us are listening?