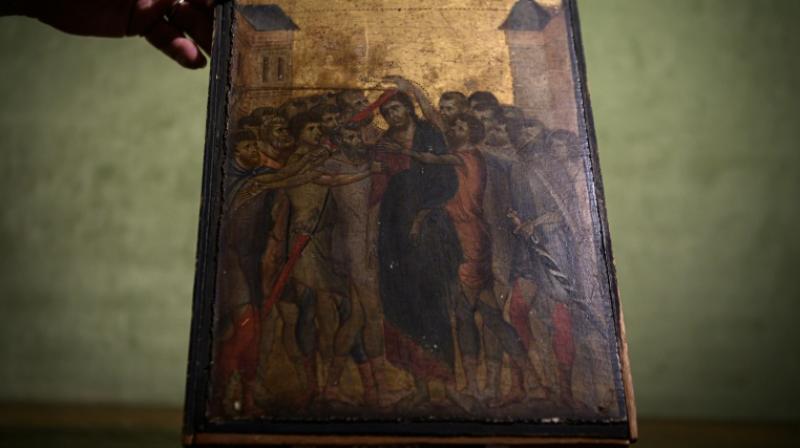 The highest figure ever reached for a painting was the USD 450 million paid for the Salvator Mundi attributed to Leonardo da Vinci and sold at auction in 2017. (Photo: AFP)

Rome: A rare masterpiece by Italian early Renaissance master Cimabue that was discovered in a French kitchen was sold on Sunday for 24 million euros (USD 26.6 million), about five times the initial estimate. The Acteon auction house did not identify the winning bidder for the painting, "Christ Mocked", at the sale in Senlis, outside Paris.

The selling price, which included costs, smashed the initial estimate of between four million and six million euros. Bidding began at three million euros, with only three of the eight bidders present at the auction.

The highest figure ever reached for a painting was the USD 450 million paid for the Salvator Mundi attributed to Leonardo da Vinci and sold at auction in 2017. Experts in September announced the sensational discovery of the painting by Cimabue which was owned by a woman in the northern French town of Compiegne, who had it hanging between her kitchen and her sitting room.

She believed it was merely an old religious icon when she took it to the auctioneers to be valued. The tiny unsigned work, measuring just 26 by 20 centimetres (10 by eight inches), was found to be in excellent condition, though covered in grime from having been displayed right above a cooking hotplate.

Art experts at Turquin in Paris used infrared reflectology to confirm that the piece is part of a larger diptych from 1280, when Cimabue painted eight scenes of the passion and crucifixion of Christ. Each of the two panels in the diptych had four scenes.

Only two other elements of the diptych are known to exist: "The Flagellation of Christ" displayed at the Frick in New York, and "The Virgin and Child with Two Angels" at the National Gallery in London. Cimabue is renowned for his mosaics, frescoes and altarpieces.

Historians say only about a dozen works on wood – all unsigned – are thought to have been made by the Italian artist. His more natural and nuanced depictions marked a turning point for Italian painters still influenced by highly stylised Byzantine art. Art historians consider him a trailblazer for the creative Renaissance that would flourish under greats like Giotto, one of Cimabue's pupils.