Evolving identities of the Bengal school of art

While these artists from Bengal had an interdependent relationship with regard to their attitude, stylistically they didn’t converge. 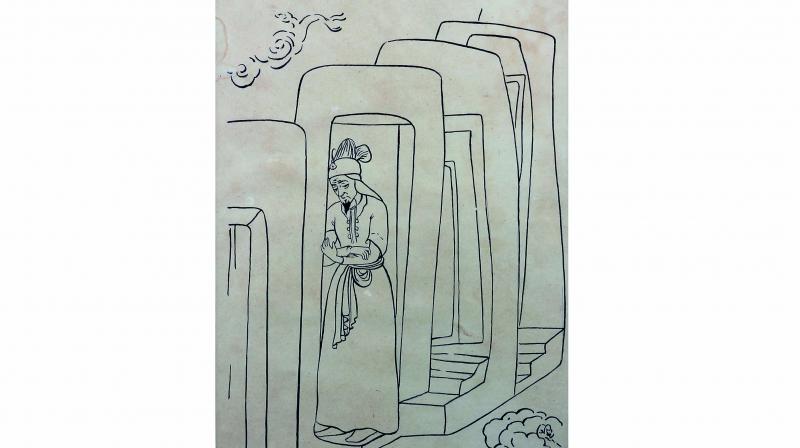 The work of Asit Kumar Haldar.

The Santiniketan art movement has played an incredibly significant role in how art is perceived and understood in the context of the sub-continent. It was shaped by the practices of the masters of Bengal art, primarily Abanindranath Tagore, Nandalal Bose, Benode Behari Mukherjee, Ramkinkar Baij and Rabindranath Tagore. Before this movement, the art schools at Calcutta (now Kolkata), Bombay (now Mumbai) and Madras (now Chennai) taught students techniques in crafts and copying British and western artists and also followed the influence of Indian spiritual ideas in the west.

While these artists from Bengal had an interdependent relationship with regard to their attitude, stylistically they didn’t converge. They were linked by their concerns and contributed to the discourse — albeit in a different manner each. Acutely aware of this, they continued to be a cohesive group. Individualistic in their work, they portrayed similar concerns. They were the co-authors of an art movement being woven around shared issues, complementing each other and enhancing their concerns. 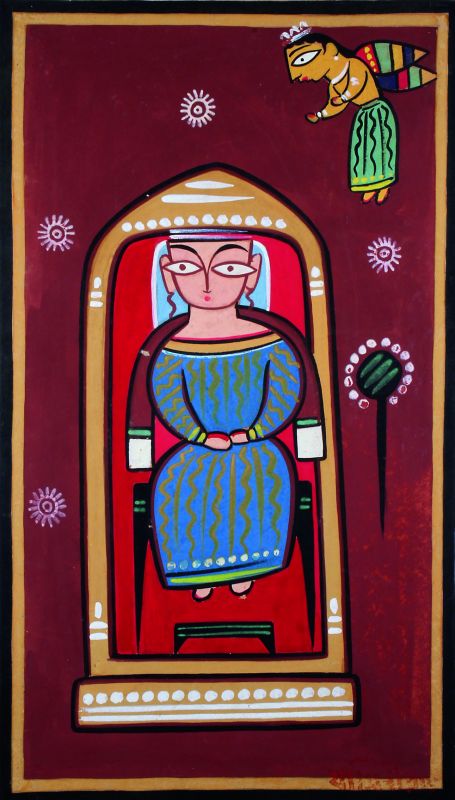 The work of Jamini Roy

After many years comes a path-breaking and very special exhibition Evolving Identities — Masters Of Bengal curated by artist Vijay Kowshik from the collection of Late Sushmita Roy Tandan that highlights this in no uncertain manner and makes some very strong statements. As a curator Vijay Kowshik brings his amazing ringside view of own experiences and that of his artist parents who lived and worked in Santiniketan as students themselves and subsequently his father became the principal of the Kala Bhavan, Santiniketan.

“I have nostalgic memories of Binode Da and Kinkar Da who were fond of me as they were my parents’ teachers and were teaching at Santiniketan when much later my father, Dinkar Kowshik, joined as principal there after Nandalal Bose passed away in 1966,” recounts Vijay Kowshik. 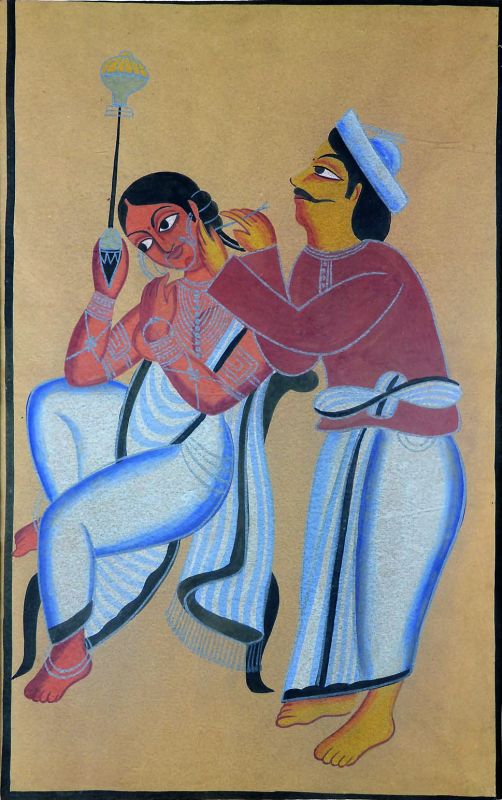 The work of Kalighat

“Abanindranath started living at Santiniketan and his student Nandalal Bose from Calcutta was asked by Rabindranath Tagore to head the Kala Bhavan there. At Kala Bhavan, Binode Bihari Mukherjee and Ram Kinkar Baij were his students who later also started teaching there. This was the golden period of art from the region when the movement took shape and phenomenal works emerged thereafter,” says Vijay Kowshik, who is also a sculptor of very refined sensibilities.

Elaborating on the context of the position Indian art he recounts that E.B. Havell (Principal, Calcutta Art School) attempted to reform the teaching methods by looking at Indian miniatures and Ajanta Ellora for inspiration instead of mechanically copying Western artists. Abanindranath Tagore was his supporter and was later appointed principal there. He attempted to develop links with the Japanese artists with intentions to establish a pan Asian linkage in art. 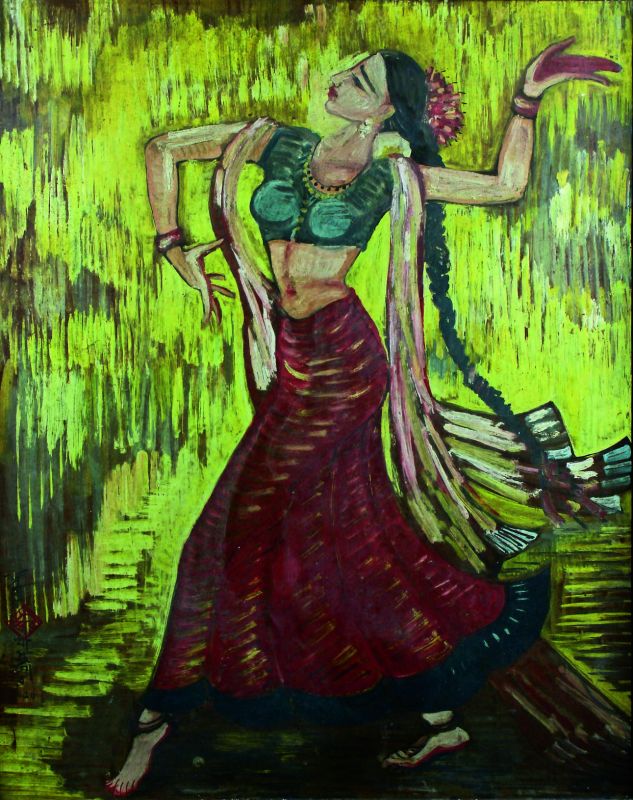 The work of Sudhir Ranjan Khastagir

The exhibition is divided into the major influences of the Bengal school like the luminaries and the lesser known but important harbingers of change. It is well known that Rabindranath Tagore began painting relatively late in his career —in his 60s. Nevertheless, he produced thousands of works and was the first Indian artist to exhibit his works across Europe, Russia and the United States in 1930s. His style was characterised by simple bold forms and a rhythmic quality. The show features many of his phases. Gaganendranath and Abanindranath, who were Rabindranath’s nephews, were deeply involved in painting. The exhibition features Gaganendranath’s phases of Japanese brush stroke influence and the marked cubist and then post-cubist direction. Both of them felt that Western art was excessively materialistic, and that Indian painting suffered from its close adherence to the British/ Western style. Abanindranath joined Calcutta’s Sanskrit College, where he learnt to paint with great expression and technical skill. He enrolled at the Calcutta School of Art and was under the tutelage of Charles Palmer and O. Ghilardi.

The exhibition traces the part that Ernest Binfield Havell who was the principal of The Government College of Arts, Calcutta, played to reform the teaching practices to emphasise Indian traditions, leading to the emergence of the style later known as the “Bengal school of Art”. Abanindranath and Percy Brown were the subsequent principals and worked towards developing an Indian genre in art, which gave birth to the “Bengal school of Art” to be pursued at Kala Bhavan, Santiniketan, by him and his student Nandlal Bose.

The exhibition comprises works of Nandlal Bose whose contribution to Indian art is immense. During his days at Government College of Art Calcutta, he impressed E.B. Havell and Abanindranath and later became Abani Babu’s favourite student. Rabindranath liked Nandlal’s work and asked him to look after Kala Bhavan in 1922 and he was at Santiniketan till the end. With him at the helm, the Bengal art movement flourished with Binode Bihari Mukherjee and Ramkinker Baij as his students and later his colleagues at Kala Bhavan. Nandlal was a prolific artist and was recognised by Pandit Jawaharlal Nehru to do the artwork for the Indian Constitution apart from various other works.

One of the most important influences on the Bengal school is undoubtedly that of Jamini Roy, who drew inspiration from the Kalighat paintings with their dominant sweeping brushstrokes, too finds place in this exhibition. He adopted the neat patterning and rhythmic outlining to create a sophisticated art form, which highlighted the true Bengal folk art tradition.

The positive presence of Binode Behari Mukherjee who joined as a student at Kala Bhavan, Santiniketan and joined his alma mater as a teacher is traced beautifully. Later at Santiniketan he was depressed when his student Dinkar Kowshik joined as Principal. Enthusiastically he did a lot of work with both his students Dinkar and wife Pushpa lovingly looking after him. This was the time when Satyajit Ray, after in depth discussions with Dinkar, made the film The Inner Eye on him. Other students who left an impact in the art world are Prithwish Neogy the founder of the art institution at Honolulu, University of Hawaii, Jaya Appassami and K.G.Subramanian.

The exhibition features another important influencer Ram Kinker Baij, who originally hailed from Bankura. Many of his works were inspired from the Santhal lifestyle. The late 1930s and early 1940s saw his emergence as a modernist thematically well grounded in the local arts, but also open to a full range of modernist linguistic innovations in art. He used local material advantageously, and worked combining the skills of a modeler and a carver. His paintings too take on expressionist dimensions like his sculptures, which are filled with force and vitality. His students who left an impact in the art world were Shankho Choudhuri, Ramachandran, Balbir Katt
and others.

Apart from the above masters there is a section depicting the works of senior artists of the time in Bengal and their directions. It is a rare and very special exhibition by any stretch and since it is on at the India International Centre till December 30, do go and see it and you will not be disappointed.

The writer is an art curator, writer  and artist and can be contacted on alkaraghuvanshi@yahoo.com