An evening of ballet

The next piece from the exotic, Orient inspired La Bayadere, is the love story of the Indian dancer Nayika and warrior Solor. 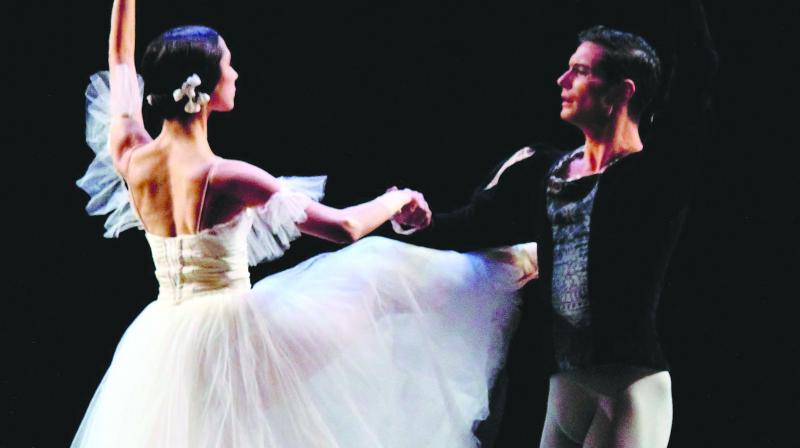 The evening opened with the familiar pas de deux from La Sylphide, version by Bournonville, when the young lovers meet in a forest before their lives are torn apart. (Photo: Seher)

As part of the third edition of Bonjour India’s year-long celebrations, a ballet troupe from France presented an evening of ballet, traditional as well as contemporary — Paris Ballet Legends. Comprising eight dancers from the Paris, Madrid and Rome operas, the evening presented eight pieces, each a story of love, each chosen as a tribute to India, according to artistic director Frederic Fontan. As the ambassador to France H.E. Alexandre Ziegler said, in his opening speech, ballet has a 400 year old tradition in France and is a constantly evolving dance form.

Frederic Fontan said he had never been to India before but had a fascination for the country’s dance tradition — “India enthralled me with the power of its technique, its particularities, its costumes, its musicality, its rhythm…” He added that each of the eight pieces presented had been chosen with care to showcase something different, something special. Being a ballet dancer himself before he shifted around 15 years ago to direction and event management for several brands including Hermes, Fontan chose pieces that highlighted different dance techniques and moods.

The evening opened with the familiar pas de deux from La Sylphide, version by Bournonville, when the young lovers meet in a forest before their lives are torn apart. The romance of the scene is beautifully captured by Roxane Stojanov and Sebastien Bertaud, both from the Paris opera. The next piece was from Don Quixote, Act 2 Scene 1, where the visuals and music on offer visibly changed to the drama of a more full bodied Eastern flavor of the Spanish ballet. The two parts were performed Alessandro Riga, principal dancer at the Madrid opera and Lucie Barthelemy, also from the Madrid opera.

The next piece from the exotic, Orient inspired La Bayadere, is the love story of the Indian dancer Nayika and warrior Solor. The rich costumes and distinctive music, a mélange of East and West was wonderful, the two parts essayed by two masters, the great Benjamin Pech, currently deputy director of the Rome Opera Ballet and Muriel Zusperreguy, principal dancer with the Paris Opera Ballet. The first part of the evening ended with a modern sensuous dance from Children of Paradise, a piece commissioned by the Paris Opera. The costumes of the original ballet were designed by the great Agnes Letestu, who danced the main part with Audric Bezard. Here the passion of the lovers is captured in energetic and racy movements, the music edgy.

After a brief interval, four more pieces were presented, from the eternelle Giselle, Renaissance, Le Parc and Non,Rien de Rien, again by the same set of dancers. The timeless familiar music and classic grace of the period pieces could not be matched, one felt, by the three modern pieces — Children of Paradise, Le Parc and Non, Rien de Rien. The latter pieces had an energy, sensuality and edginess, un rhythm erotique, that was indeed appealing but somehow lacked the familiarity and subtlety of the classics. Non Rien de Rien had the immortal song by the incomparable French singer Edith Piaf, “Non Je ne regrette” recorded in 1960, music by Charles Dumon. Just the sound of Edith’s powerful voice transports one directly to the beautiful boulevards of Paris.  The powerful lyrics by Michel Vaucaire “No I regret nothing at all, because my life and joys begin today with you” have a timeless quality and touch a chord in the heart of all lovers even today.

The troupe had two concerts, in Delhi at Siri Fort and in Mumbai at the NCPA, and was co presented by Delhi-based event management company Seher, headed by Sanjeev Bhargava.