It was a difficult subject of how to deal with middle age crisis. 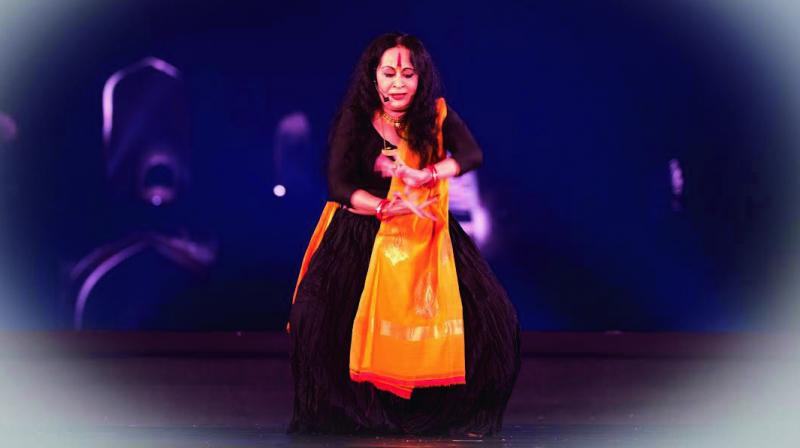 Sonal Mansingh was forthcoming and honest in her responses and my liking towards her grew into admiration and respect.

I had been a silent admirer of Sonal Mansingh’s grace, her beauty, the elegance that she wears, and her art. I had watched her performances on stage, on television, read her interviews and developed a tremendous liking for her, without even her knowing about it in the same manner like most other artistes who are unaware about their fans. But I got to know her personally sometime in mid-eighties when I was writing a column for one of the large publications of those days. I sought a meeting with her and she obliged. It was a difficult subject of how to deal with middle age crisis. Sonal Mansingh was forthcoming and honest in her responses and my liking towards her grew into admiration and respect. The article was later included in my book Tees ka Safar. I have since then wondered on her vast knowledge of scriptures, her passion to learn, her capability of innovating and playing with her subjects in herproductions and sincerity to pass her knowledge to her disciples, as if she is offering her guru dakshina to her gurus and yet remaining contemporary and relevant.

Little would have Mangaldas Pakvasa, freedom fighter, a four-time governor and grandfather of Sonal Pakvasa visualised that a girl on whose birth he had distributed sweets in the entire Pakvasa clan and who sat on his lap till she started going for her Manipuri dance classes at age four would become a name to reckon with for her contribution to Indian classical dances. He sure did not know that the little girl would go on to learn Bharatnatyam and then Odissi dance and earn respect and adulation for creating magic on stage and one day would be an internationally acclaimed performing artist.

Later Sonal Pakvasa started learning Odissi from Guru Kelucharan Mohapatra as she was introduced to him by her father in law Dr Mayadhar Mansingh when she was 21. But before that she had mastered Bharatnatyam and created spellbinding moments for her audiences. On seeing her performance, Dr Mayadhar Mansingh felt Sonal was born to excel in Odissi and put her in touch with Kelu Babu. She learnt everything that was possible for a true Shishya or a seeker of knowledge to learn from her Guru Kelucharan Mohapatra. She imbibed her Guru’s traits of Odissi while continuously innovating and adding new features to the dance form.

She has made her Gurus proud, her Bharatnatyam Gurus Prof. U.S. Krishna Rao and Chandrabhaga Devi, Odissi Guru Kelucharan Mohapatra. She was receiving recognition globally for her creativity and finesse. A big influence on her was scholar-poet Jivan Pani who richly contributed to Sonal’s values and knowledge.

Having touched the nuances of Bharatanatyam and Odissi, deriving and understanding the poetic vision of the dance forms, identifying herself as an eager disciple and keen learner, generating an aesthetic experience for the gallery, Sonal knew what her gurus had given to her. She could feel the guru gyan in her bones and decided to pass on what she had learnt from her selfless Gurus to the generation next. “Guru bin gyan kahan se pave” was her understanding and Sonal knew it too well that if the Indian dance forms had to survive, it was imperative to create more and newer Sonals.

And thus Centre for Indian Classical Dances was formed in 1977. CICD has been an example of Vasudhaiva Kutumbakam from the time it was established. Established in the true tradition of guru-shishya parampara, CICD is an aesthetic experience, it’s art of living, it is a lifestyle that teaches individuals to become good human beings. At CICD what is taught is just not dance but an expression of traditions deeply merged with the sensibilities of an art form and an artiste. What in ancient times the Shishyas learnt in Gurukul, CICD teaches it to the disciples in Guru Shishya Parampara. It is an ultimate experience, a bliss, the meeting of soul with the art form that is dance.

As CICD completes four decades of its existence giving the superior learning experience to its seekers, Sonal Mansingh has been on a constant journey to reach out to those in search of excellence the world over. She has trained thousands of disciples in India, Australia, the UK, the US, Brazil, Venezuela, Mexico, Panama amongst other parts of the world, a contribution unparalleled. These disciples are of Indian origin as well as nationals of other countries. They are further transporting our rich heritage to more and more students. Sonal Mansingh has created umpteen solo and ballet productions on classics as well as contemporary subjects based on her research of mythological and modern literature of these countries. Her productions of Greek mythology, Indian Panchtantra Kathas, Mahabharata characters, conservation of nature and many more have been much talked about and left deep impression on the psyche of the audiences. One of her recent productions on stree — based on Upanishdic characters has left its long lasting impact. The interpretations of women characters and reference to different names and Mantras have brought these characters alive in modern times.

Sonal Mansingh wears many hats — an author, a philosopher, a social worker, a singer, a dancer par excellence, and a guru. Centre for Indian Classical Dances (CICD) brings a three-day festival beginning April 30 — Kalayaatra: Celebrating Indian Art Traditions in Delhi where Sonal Mansingh’s disciples from all over the world pay their tributes to their guru through their dance.

The first day, which also happens to be Sonal Mansingh’s 74th birthday has Odissi Madhuri and Dance Drama: Shiva: Mahatmaya. On the second day Bharatanatyam by current senior disciples with a special presentation of rare Bharatanatyam items by Alumni Meera Krishna now residing in Seattle, US, will be followed by dance drama Shri Bhagvat Mahima.

The third day will see Sonal Mansingh perform in a solo dance theatre: Pancha Kanyaa. There would also be book release on life of the inimitable SonalMansingh, authored by Sujata Prasad. The book is titled Sonal Mansingh: A life like no other.

What would come through these new productions of CICD is to be witnessed, but one is certain to see new dimensions of Sonal Mansingh’s creative genius unfolding.

Sunita Budhiraja is an author, poet and communications professional