As it is, the 12 per cent tax was a bad enough deterrent for people to not acquire art. 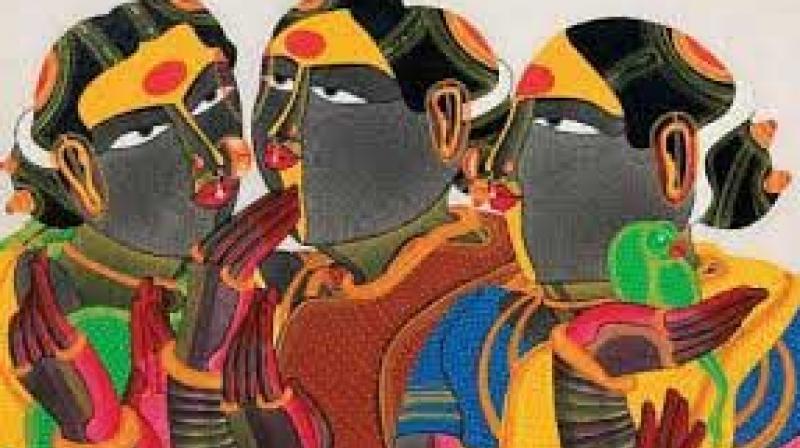 I have worked for and with the government often enough and long enough to know that if they really want, they can positively impact life at the micro and marco level to such a huge extent that it starts resembling a magic wand.

This is also the reason why I don’t always blame the government for all the ills that befall us. The pulls and pressures are so many that everything becomes a tight rope for both the bureaucrats and the politicians – not that there aren’t enough insensitive dhurthas in both cadres, but it is also true that that there are many real fabulous and concerned people too. 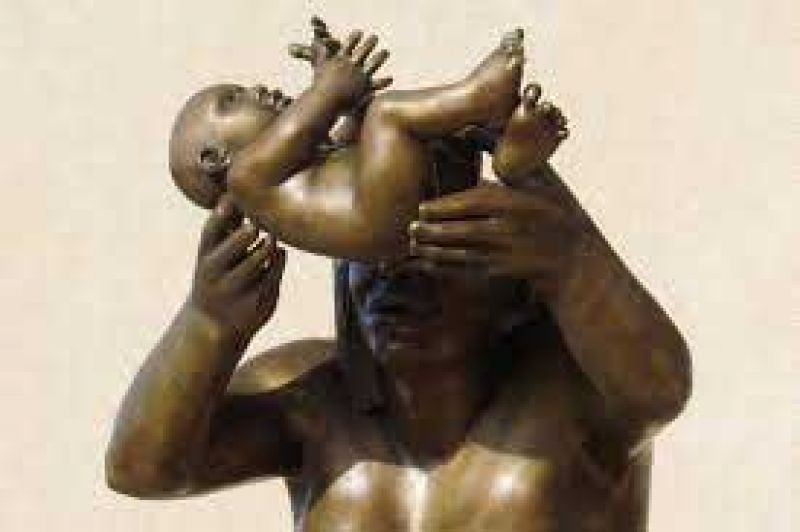 Sculpture of a mother holding her child.

The reason for this reverie was a phone call from one of the biggest gallery owners telling me that it is increasingly difficult to run an art gallery in India. I am zapped. Not because I disagree with her, but if this be the state of gallerists, I shudder to even imagine what the state of the artists must be like.

With the GST looming large and the earlier demonetisation that had a ruinous impact on the health of the arts, art and artists are in for even tougher times. As it is, the 12 per cent tax was a bad enough deterrent for people to not acquire art. Having said that, it is also true that the government continues to be the biggest patron of both the performing and visual arts, yet as we stand at a critical juncture for the arts to survive, we need a little more intervention. This is not to say that government schemes don’t exist. They do. But greater numbers of junior and senior artists need to be covered by these schemes for the greatest good. 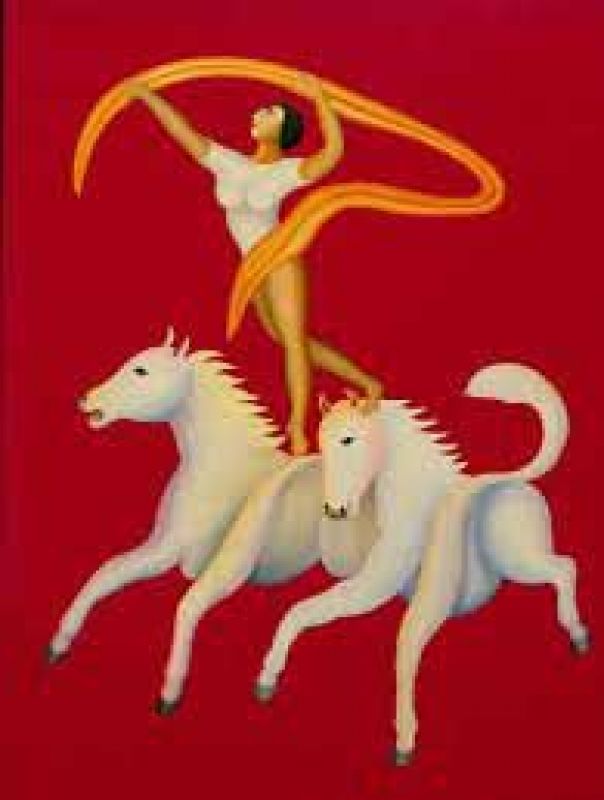 For one, I strongly feel that like sportspersons, artists too should get jobs in banks and other public-sector organisations. Large private organisations too need to get artists on the rolls to help support them. Similarly, pension plans must be drawn up to bring the largest number of artists within the ambit. Since there are erratic and irregular incomes, most artists have no proper savings and can do with help. The creative community is often shy of voicing their demands and intrinsic pride stops them from talking about their problems.

I feel we in the media should look inwards, and support our civilizational watermarks by which our civilisation will be judged with greater compassion and give rightful space to the arts and artists. This will go a long way in creating public awareness and lead to better public-private partnerships.

When the so-called free press is not doing its duty towards the arts, the government should make it mandatory or offer them advantages like releasing DAVP and other government advertisements to such media houses to bring about a positive change in the media mindset. There can no expectations from private stake holders for advertisements from an “industry” that is already struggling. 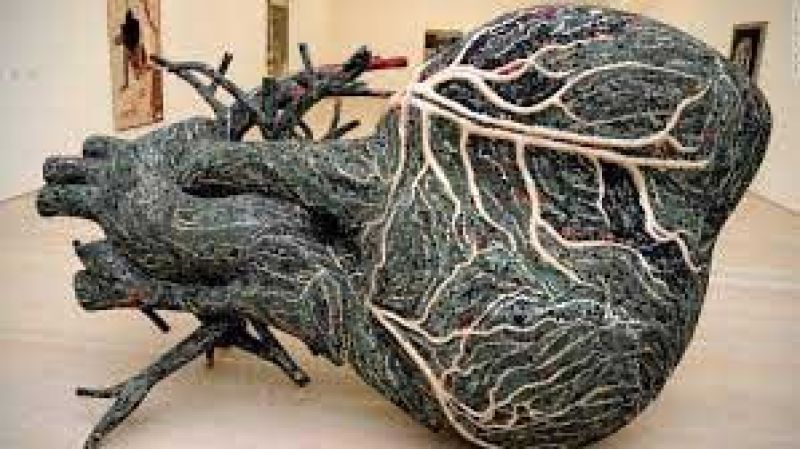 Global positioning of Indian arts is a must and critics and writers should be encouraged and involved in this in a big way by supporting them too. With no space in the media for the arts, there are hardly any critics and writers left who know their stuff and newer ones are coming within the ambit again for lack of space.

The more important art fairs like the Venice biennale, Florence biennale, Art Basel, Dubai and Sharjah Art Fairs etc have little Indian representation and here the governmental intervention is imperative. Unlike other countries where they function well in advance, here bureaucrats make last minute scrambles and push artists who often have no choice but to dance to their tune to piece together hasty presentations that don’t stand anywhere in comparison to the rest of the world.

Here, several bureaucrats themselves push their names forward to grab that as well. Embassies abroad should be given a mandate to keep an eye out to identify Indian diaspora artistes and artists and help network for them too. Presently, Indian diaspora are the worst-hit for they are the orphans where they have no space in their host country for reasons of cultural divisiveness and in the country of their origin, they come across as out of place.

Many artists have no option but to be absorbed in schools as teachers of both art and craft, but if larger organisations hire artists, the same people can be put to use manage and select collections that are acquired or are to be acquired. So far, only schools are making use of art teachers to “decorate” the schools spaces – strictly speaking, it is not their job but we all do things to keep our jobs. There is a rule in place since independence that enjoins that all government buildings must use two per cent of the total cost towards art.

Unfortunately, many unscrupulous agents circumvent the rule and euphemistically call whitewashing “painting”, but strictness in submitting authentications by artists will hopefully help matters. Income tax payees beyond a certain level must be enjoined to acquire paintings worth a certain amount to get tax rebates. These along with images and authentication certificates of the artworks must be submitted, so that the facility is not abused. And these amounts need to be ratified to bring them to more realistic levels.

Until recently, whenever government grants were given, the first installment would come regularly, but the subsequent grants were just not forthcoming, try as one did. I have myself been the recipient of two such grants where even the joint secretary threw up his hands in despair and expressed inability to help get the subsequent installments, so well entrenched are the lower cadres. Hope under the new regime things are better.

I was recently on a panel to populate a huge government building with a measly budget in keeping with the two percent. It made no sense. I shared the instance of the Maurya Sheraton Hotel in Delhi, whose hotel and land etc is independently evaluated as less than its art collection. When investing in Indian arts, one can be certain that it will end up paying for itself in a few years’ time like.

It should be mandatory to add artists on the panels when interiors are being done, to ensure that some art is acquired. When architects and interior designers can be paid huge amounts of money, why not artists? While on the subject, I sincerely feel that income tax should not be levied on artists. For every painting sold, there are hundreds that are not sold and the same amount of expertise and art material is used for them too.

Eligibility criterion need to be strictly in place so that partisan politics can be avoided as far as possible. Since the arts are often non-formal in terms of educational institutions, the number of shows might be a good criterion to judge both for visual and performing arts. The All India Radio and Doordarshan have put in highly respected criterion in place for grading artists that are like badges of pride for most artistes. In fact, I know many artistes who are more proud to say that they have the Sangeet Natak Akademi awards than even the Padma awards, which are often politically motivated. Just for the record, while most dancers and musicians are able to wrangle the Padma awards, few painters get the Padma awards – speaks volumes about their worldly-wiseness! I feel that these suggestions that will go a long way in helping the arts survive and keep India’s unique cultural heritage alive.