Situational comedy about a romance

The writer is a theatre personality and a well-known critic 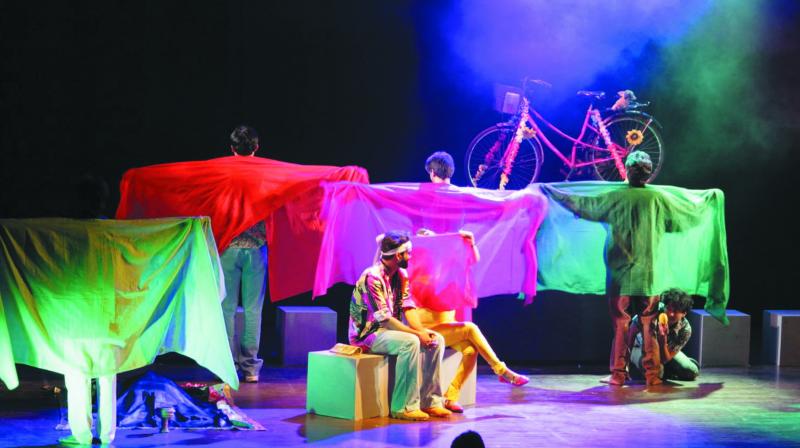 The action actually begins long before the curtain opens.

The play Prem Kabootar was staged last week at the Sri Ram Centre. Presented by the Shri Ram Centre Repertory Company it was based on a novel by Manas Kaul and dramatized and directed by Sameep Singh, director of the Repertory Company. A situational comedy  about a burgeoning romance between a school girl and a street smart boy, Saleem. The play begins with a long silence and a visual with 3 girls and a boy seated on one side and four boys seated on the other side of a raised platform on which is revealed a cycle when the action begins. The action actually begins long before the curtain opens.

The man sitting on the steps of the stage writing away rapidly, thinking and throwing away scraps of paper on which he has written something, obviously a writer in the throes of creation. When the curtain opens the writer gets up and comes to the audience and shakes their hands down the aisles, asking them if they are well and everything is alright with their lives. Then the role of the writer is taken over by an actor who comes on stage and introduces himself as Sunil the writer of the play. The original writer also takes on certain roles in the play like becoming the father of Sunil in a couple of scenes. Sunil is going to see his best friend Saleem in the maidan from there they proceed to see Raju, the tea shop owner, who’s another friend.

The scene of the maidan is captured very well by the director with a mazaar with a grave  visible at one end and a man rolling on the ground in front of the mazaar with a begging bowl. Throughout the maidan there are people doing different exercises. Generally behaving s if they are at ease where they are. Raju’s tea shop is at the other end of the maidan. It is revealed that Saleem is in love with Meenakshi, to whom he has written a love letter which is handed over in a dramatic way.

Raju likes Meenakshi’s friend very much so it is suggested that he writes a love letter to her and this responsibility of writing the love letter is given to Sunil who for the love of his life cannot write a love letter just like that. So he brings in a character called Pappu into the letter and explains how Pappu is very upset because his girlfriend left him and he will not take Sunil for a cycle ride anymore. The girls, Meenakshi and her friend, get interested in knowing more about Pappu from the letter that Raju hands over to his love. Meanwhile, Saleem is also romancing one of the teachers in the school with lines like, “You are too young to be a teacher” and “ So what if you are older than me.”

Now Sunil is in a fix. Pappu is a character from his imagination so he invents a further tale about Pappu and his smoking habit which is far from the truth. Even if there was a Pappu he would hardly smoke cigarettes!! The writer then imagines that Pappu is in love with a girl called Sonakshi who lives in nearby town, where there is a garden with a hidden bench. On this bench he imagines Meenakshi to be there waiting for Saleem to arrive and the two of them together play alot of love signals holding each other and kissing. Then there is a bomb blast and shooting with the imagined Pappu caught in the crossfire which he escapes. How the jumbled Meenakshi and Sonakshi coexist in the writer’s mind we don’t know. Sonakshi is a name picked up from his father’s students who is called by that name when he was tutoring English classes in the evenings in the two roomed house.

The three actors who played the roles of Sunil, Raju and Saleem were talented in this order. Infact the man who directs the scene changes in the 90 minutes non-stop play is Manu, who is just an extra in the maidan. The play was great fun while it lasted with Sunil becoming a Prem Kabootar in the end when Meenakshi/Sonakshi falls in love with him. The gutargoo while he goes round the stage was perhaps the culmination of a lot of physical action and this display of movements which the director did very well on stage. The lighting by Sameep was very good and musical interludes were appropriately fixed.

The writer is a theatre personality and a well-known critic