In the Indian context, there is an outlet for every aberration and revulsion too is no big deal. 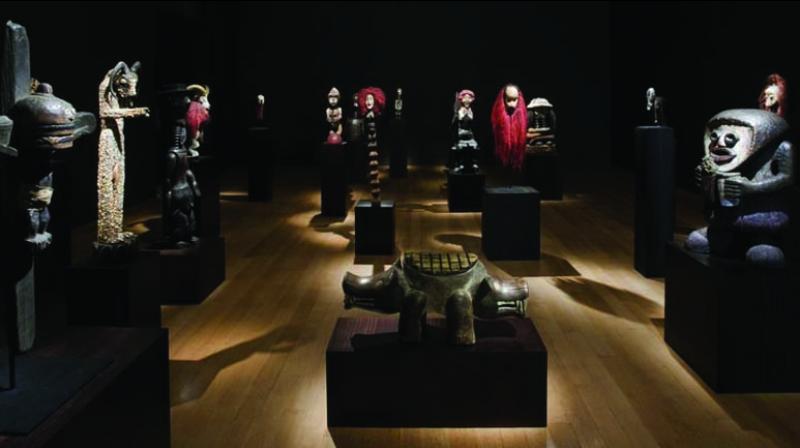 Diamond encrusted human skulls, formalin preserved genitals of a zebra, rotting human excreta on a swing, oozing menstrual blood, scalloped out insides of dolls dipped in human blood, mounds of stinking trash… the list of such revulsion inspired art seems to be getting longer by the day. Call it vibhitsa rasa, shock art, depiction of reality, reflection of our times – this is true not only of India but across the world as well.

Are artists taking artistic licence too far? A case in point is UK artist Martin Creed’s statement piece in which lights go on and then off again at five second intervals in an empty room. The idea was to focus attention on the room that forms the backdrop of exhibiting pieces of art and experiencing it differently. It did win the Turner Prize but there was a fracas in the media, with many journalists questioning whether it could be considered an artwork.

Ditto for a work by Yoko Ono, an artist known for thinking out of the box even before the phrase existed, she once distributed images of a woman’s breast and crotch all over Liverpool. Inspired by the childhood memories of her late husband, John Lennon, whose own mother died during his adolescence, the work was intended as homage to motherhood but ended up offending quite a few people.

Makes one wonder as to where are we as a people and artists headed? Admittedly, art also means depiction/reflection of reality, but is there all that is left? Whatever happened to the old adage of art being synonymous with beauty? When did we forget that one of the roles of art is to inspire and energise? Or the fact that when a civilisation is judged, it is evaluated by its art? Is this what we wish posterity to remember us by? Ugliness seems like a malaise that has spread its ugly tentacles into the creative impulses of the artists’ mind.

In the Indian context, there is an outlet for every aberration and revulsion too is no big deal. It finds outlet in the Aghori sects, who it is believed, who practice in samshans late into dark night, even eat human excreta. But this is not an end in itself but the means to get over revulsion of anything that is God’s creation. And is more a means of worship of a different kind. For instance, are Mithu Sen’s works with oozing semen and menstrual blood that guarantee revulsion? Shock too must have a reason or at least where it is a means to arrive at an end. Populated with bananas and flowers woven together with body fluids, her painting are disturbing to say the least.

Talking of worship, an installation of 34 wooden carvings from the Jake and Dinos Chapman collection was described as rare ethnographic and reliquary fetish objects that had been collected by the Chapman family over 70 years. Close examination, however, revealed that the objects are more a statement both on the appropriation of the “tribal art” style by European artists and on how fetish objects have themselves become commodified over time.

When Tibetan artist B. Bodh highlights the genocide of the Tibetans by using actual human blood flowing through dolls whose insides have been scalloped out he is attempting to shock the sensibilities of the rest of world to highlight the seriousness of the Tibet situation. The stench from the human blood of course makes it impossible to stand in the gallery for too long but at least there is a point in the exercise.

Skeletons appear as an aide memoire of death throughout art history, but Adel Abdessemed’s oversized sculpture seems more humorous than sobering. Known for his provoking works tackling racial, sexual and religious taboos, Abdessemed employs a wide range of media towards his expression. The enormous humongous skeleton with its arms outstretched floats horizontally above the floor as if in mid-flight. At the back its feet hangs a large aircraft engine turbine, ostensibly propelling the flying bones or is it sucking the skeleton towards obliteration? A political migrant to Paris from Algeria, many of his works express the artist’s deeper concern with the fragility of life and the violent effects that our globalised society has on the individual.

Enough damage has been done already — some of it irreparable. The situation is like an emperor’s new clothes. Who will have the courage to bell the cat and call off the bluff? High fluting juxtapositioning of jargon has been the mainstay of ignorant. It is the same approach that wants to shock to make a statement a la Lady Gaga wrapped in raw meat clothes. Indian art has made that transition where its reference points were rooted in the West. No longer. Then why ape the West in shockology?

But then contemporary art has always cocked a snook at classical arts — dance included, calling it pretty pictures caught up in a time warp, but why must art be ugly to be contemporary? Death has been a recurring theme in Hirst’s art, stretching back to his very earliest works. A human skull encrusted with 8,601 flawless pavé-set diamonds, For the Love of God cost £14 million to create and weighs 1,106.18 carats. Its title comes from an expression regularly uttered by Damien Hirst’s mother on hearing his early ideas for artworks. The skull is likely to that of an 18th-century man of European/Mediterranean ancestry and was bought by Hirst from a London taxidermist. Its teeth are real and belong to the skull. The piece acts as a memento mori, a reminder of the inevitability of death. It is interesting. However, Hirst’s latest creation is about birth where the various stages of a foetus are captured in an installation in a medical centre in Doha. So artistic exploration comes a full circle. Or does it?