The magic of movement

17-year-old Avika Bassi left the audience in awe with her two-hour-long Kuchipudi recital. 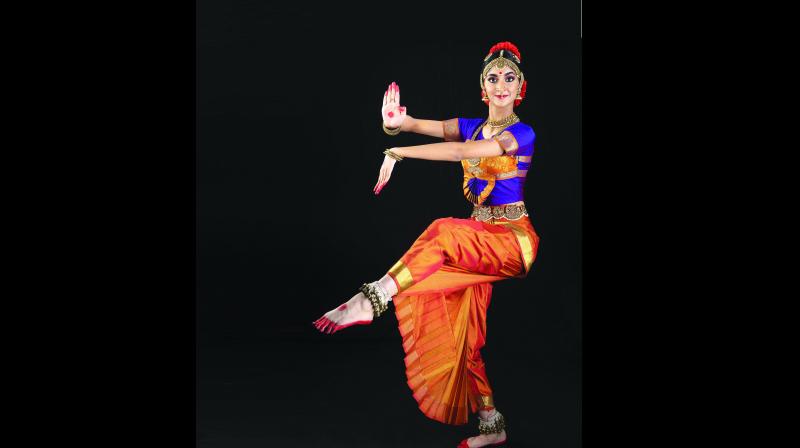 Avika Bassi’s performance was the highlight of Kamani Auditorium’s primetime schedule on Wednesday.

Be like Avika. She is all of 17, and she just delivered a two-hour-long solo Kuchipudi dance recital to a packed audience. She has been at it for 11 years now, and when asked how she balances it with all the schoolwork, she responded, “I feel I manage my schoolwork better with dance practice. When I have a dance class, I am better organised.”

Avika Bassi’s performance was the highlight of Kamani Auditorium’s primetime schedule on Wednesday. She was entrusted with the responsibility of keeping an audience entertained for two hours straight — not an easy feat. What worked in her favour was a diverse Kuchipudi performance, divided into six parts, helped by the fact that Kuchipudi is traditionally a dance-cum-drama. She recaps, “I started it off with an invocation, Ganesh Vandana, which is done before starting anything auspicious. Then I moved on to Maan, which is a pure nritta (dance) piece with eye and neck movements, and various footwork patterns. Then I performed Krishna Shabdam, which had expressions and involved a heroine, who is me, calling Lord Krishna. Then I performed the Dashavatara or the ten avatars of Lord Vishnu, in which I performed all ten forms. Then came Sanson ki Mala, a Sufi as well as Hindu piece, which was in Hindi, so the audience could connect to it.”

The recital concluded with Tarangam, the highlight of the performance where the dancer performs while standing on a brass plate. This, of course, requires immense skills and the sound of the plate adds a unique aural dimension to the routine.

One cannot help but wonder, how did Avika manage to pull this off at such a young age? Well, other than her talent, the role of her gurus — Drs Raja-Radha Reddy and Kaushalya Reddy — and her mother as an inspiration, cannot be discounted here. The dancer continues, “I started off with learning a Western form of dance when I was five. When I had my shows, I used to be shy. My mum was passionate about classical dance. She used to learn it but she left it, so she wanted her kids to do it. She put us into Kuchipudi dance. When my first show took place, it felt like I had found my calling. It was really good and everyone was impressed by me since I was six years old.”

As for her gurus, Avika has grown up in the able guidance of individuals who, “motivated us to keep dancing, did not lose patience, and even showed us the steps themselves, unlike many other well-known teachers who don’t teach their students directly.” Years of endeavour culminated into the two-hour performance, which definitely had Avika nervous. She recalls, “I was really scared before my show; I was just overwhelmed and really stressed. But my gurus calmed me down, and they said even if I make a mistake I should give my hundred per cent. So, I had to make them proud. It was a really emotional day for me.”

It goes without saying that her performance went splendidly. However, she has merely taken the next step in her Kuchipudi career, and there is plenty more left to come.