No storm in the tea cup, but what a cup!

He was born in 1961 and has kept the traditional purity of the Jin Gama Pottery Kiln established by his father. 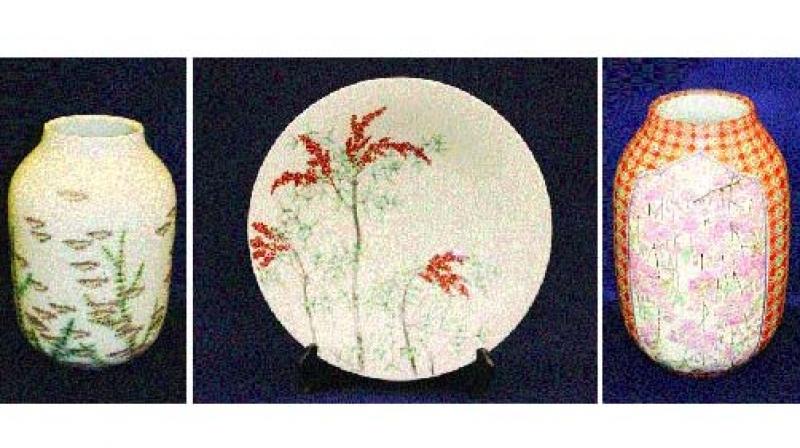 Self-taught along each step of his creative process, from turning the potter’s wheel and kiln firing to decorating the surfaces of his pieces with delicate drawings, Obata departs from common motifs in the Arita-yaki style to carve out a special place for himself.

It is so endearing the way the Japanese treat their arts — with so much respect, lots of pride, acutely conscious about passing it on to the next generation they treat themselves as a repository, the way they approach conservation, making efforts to create museums and make museums a way of life. It shows in their lifestyles where the sophistication of their aesthetics is visible in everything — including packaging of the smallest of things. The ongoing exhibition of Japanese artist Yuji Obata – The world of Modern Arita from Japan at the Palm Court gallery at the Habitat Centre (on view till August 31) brought these thoughts as I looked at the very refined creations. Obata’s work in Arita-yaki porcelain carries with it over 400 years of history and tradition yet expresses a fresh originality that signals a future for this ancient art and is being shown in India for the first time.

Self-taught along each step of his creative process, from turning the potter’s wheel and kiln firing to decorating the surfaces of his pieces with delicate drawings, Obata departs from common motifs in the Arita-yaki style to carve out a special place for himself. Unlike typical Arita Yaki porcelain production, Yuji Obata takes his time, creates the shape, fires, and paints each product all by himself. He uses flowers, fish, and animals as motives. His favourite theme is cherry blossom. He uses a traditional special Japanese pigment in pink for his cherry blossoms. He has devoted himself to the ethereal beauty of the Sakura tree as he captures the full blossoms right down to the fall of the last leaf. The Sakura tree is a popular motif in Japanese art and features prominently in Obata’s work.

Obata is one of the most well-known artists of the fine art of procelain painting from the city of Arita in Saga Prefecture in South of Japan. His repertoire extends from the decorative blocks to the intricate designer vases and decorative plates. Obata also presents an exquisitely designed pair of teacups at the exhibition.

He was born in 1961 and has kept the traditional purity of the Jin Gama Pottery Kiln established by his father. He has walked the strict path to graduate from Ayoma Gakuin University in 1984 , completed his training from Arita College of Ceramics in 1987 and became the member of the prestigious Japan Kaigi Association and Arita Ceramics Art Association.

“The idea is to give new outreach to the traditional style in Arita, especially the distinctive style that is Sakura”. Arita-yaki which is the oldest form of craft has always had a unique pull for art lovers,” said Obata.

The Japanese promoters Takeshi Ohmi and Mina Omura have taken it upon themselves to spread the word about this art and have introduced Obata and in India. "The world of Obata is so beautiful and distinguished in the world and we believe that his art will be appreciated also in India,” they said.

Arita yaki is a broad term for Japanese porcelain made in the area around the town of Arita in the former Hizen province in northwestern Kyushu island. It is also known as Hizen ware after the wider area of the province. This was the area where the great majority of early Japanese porcelain, especially made for exports.

The first porcelain made in Japan followed the discovery of porcelain clay near Arita near the end of the 16th century. A number of kilns opened up in the area, and a considerable variety of styles were made, the Japanese export porcelain destined for Europe often using Western shapes and Chinese decoration. Early wares used underglaze blue decoration, but by the mid-17th century Arita was in the forefront as Japan developed overglaze "enamelled" decoration in a range of bright colours.

A quiet Japanese town with a population of less than 20,000, Arita has been responsible for one of Japan's most prestigious exports since the 17th century. Arita's obsession with porcelain ware, registered officially as one of the Traditional Crafts of Japan in 1977, dates back more than 400 years. Located in Japan's Kyushu region, the town has been one of Japan's best-known places to produce porcelain since the discovery of raw materials in the neighborhood in 1616.

Porcelain wares created in Arita, using traditional methods, are almost glass-like. They're light and thin yet durable and each of the works is painted in gorgeous patterns. It's become a popular export – mainly to Europe – since the late 17th century. Today, fewer porcelain kilns are in operation. The remaining ceramic artisans insist on producing Arita wares the traditional way in order to preserve this historical asset. Each of the pieces is fired for multiple days before it's painted by hand. In addition to shops selling the wares there are multiple porcelain-themed attractions around town including The Porcelain Park – a museum and shrine with a ceramic archway.