Anviksha insists that her trip, although inspired by the 2011 Bollywood movie Zindagi Na Milegi Dobara, will not mimic it 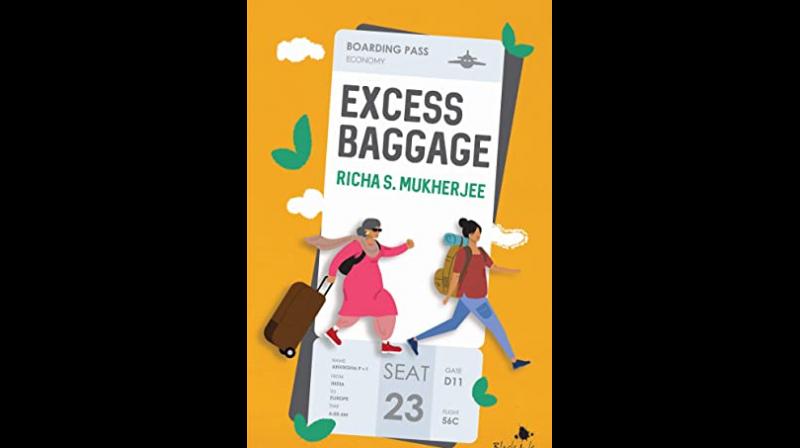 Richa S. Mukherjee’s third novel, Excess Baggage, opens with suspense, sarcasm, and a mother-daughter squabble. The book’s cover and opening pages hint at a light read: two opinionated women who can’t stop arguing, who vacation in London where they… can’t stop arguing. If the book’s underlying message is that mothers and daughters are inseparable while irreconcilable, many readers will surely relate.

The mother and daughter here are Smita, an enterprising clothes designer, and Anivksha, a trained anthropologist. Smita has raised Anviksha as a single mother and Anviksha has just divorced her second husband. At first glance, these two protagonists have potential.

Anviksha decides that she needs a change of scene after divorce number two, and books a trip to London. Her mother insists on accompanying her. They argue about this, and finally, Anviksha gives in. Excess Baggage is the story of Anviksha’s no-longer-solo trip, now laden with her mother’s personality and demands, not to mention her own emotional baggage. Mukherjee has set up an exciting opportunity for these two characters. Her readers are primed for a comedy of errors and surprises in London.

But this is where the book stops delivering. In spite of a promising set up, and some genuinely funny lines throughout the book, Excess Baggage deflates after the characters begin their one-month vacation. Anviksha insists that her trip, although inspired by the 2011 Bollywood movie Zindagi Na Milegi Dobara, will not mimic it. But many scenes seem straight out of a movie. Smita’s food-stuffed suitcase is stopped at customs in airport; the crisis ends with her distributing homemade laxatives to stern British officials. A few days later, Anviksha finds that her mother has gathered several Indian men at their lodgings, for a swayamwar. In another scene, Smita ends up in the middle of a flashmob, leading the group in bhangra moves. The duo even spends a weekend in Amsterdam, where they bump into Anviksha’s estranged father at a strip club. Each of these scenes is short and often humorous, but they either begin or end with an argument. And while mother-daughter clashes are inevitable, Mukherjee denies either character any space on the page to reflect, reconcile, or properly recover.

Their disagreements become boring and repetitive, rather than advance the plot. Mukherjee’s choice of London is also underwhelming. While Zindagi Na Milegi Dobara actually utilises its different settings to evoke exciting new cultures, Smita and Anviksha are mentally trapped in India. Smita prefers her own snacks to eating out; Anviksha spends more time chatting with her friends back in Mumbai, than interacting with the city. In fact, their exposure to British life is surprisingly limited. Even though they are staying with Anviksha’s cousin Preeti, Anviksha does not explore the city with her, or meet any of her friends. Instead, they attend Preeti’s British boyfriend’s teenage brother’s birthday party, wasting pages on stereotypical dialogues between garrulous Indian aunties and buttoned up Britishers.

Anviksha is supposedly an anthropologist, but doesn’t ever act on those instincts. She visits tourist sites in London, scoffs at her mother’s memories of Partition, and writes off her two brief marriages without any introspection. If readers hope to experience a foreign city, or family tensions, through an expert on human behaviour, they will be disappointed.

“Chick Lit” in India, written in English, is at least 20 years old. But Mukherjee’s latest work seems neither experimental nor substantial. Excess Baggage is trying to be many things at once, which ends up sounding more confused than comical. If you want to vicariously enjoy a trip abroad, follow Anviksha’s idea and watch ZNMD instead.

Aditi Sriram teaches writing at Ashoka University and has authored Beyond the Boulevards: A Short Biography of Pondicherry (2019)