Mukherjee: A status quoist in the culminating analysis

In his capacity as Rashtrapati, Mukherjee did express sorrow at these grotesque happenings that mauled the spirit of the Constitution 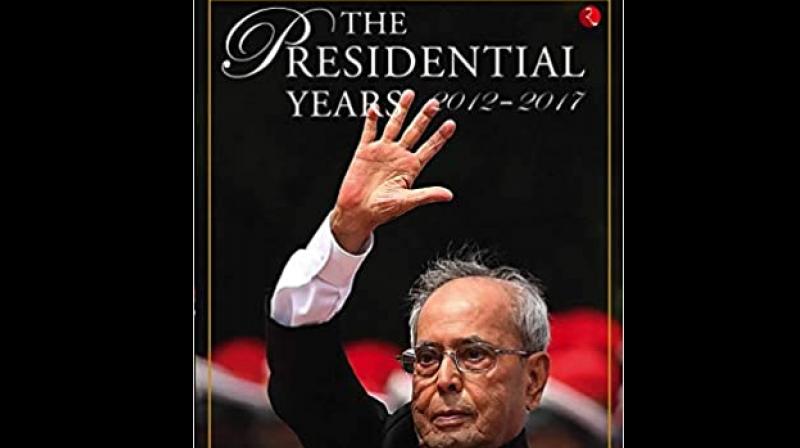 Cover image of the book titled The Presidential Years

One may quarrel with the ideas of prominent political figures even when these are published only after their death in keeping with the embargo they placed on their writing being made public. But this does not seem necessary in the case of the late Pranab Mukherjee, whose long career in politics — during much of which he held high executive positions — was capped by his elevation to the office of President (2012-17).

The reason is that he takes few unexpected turns. The Constitution is his rulebook and guide, and on the whole he shows himself to be a fairly traditional interpreter of that basic document of the republic he served in so many capacities. At any rate, he shows himself in this book as one who shies away from causing a flutter.

In this volume, the last of five he wrote while being in Rashtrapati Bhavan, criticisms are made in elliptical fashion, and in the end no offence is really meant to be caused. The name of the game is stability at all costs, and this is where the former President may be thought of as being at his most fragile.

Mukherjee’s presidential years saw India being convulsed by actions of violent civilian gangs in all parts of the country. These non-state actors appeared to have the blessing of state actors. In his capacity as Rashtrapati, Mukherjee did indeed express sorrow at these grotesque happenings that mauled the spirit of the Constitution. Yet, in The Presidential Years there is no reference to this disturbing phenomenon which, in the reading of careful observers in India and around the world, has placed this country on a slippery path.

There is “an attempt on my part to place before the readers the functions and duties, and the challenges that I encountered, during my tenure as President,” says the protagonist. But in the writing he has gone well beyond his presidency. There are references, for instance, to Balakot, the so-called surgical strike against Pakistan, and to Prime Minister Narendra Modi’s return to power in 2019 with a bigger majority than in 2014. And yet, there is no mention of the author’s visit to the RSS headquarters in Nagpur in June 2018, eleven months after he demitted office as President, although that event caused agonised debate in the country and his own daughter, who is with the Congress Party, was left criticising her father.

This would seem a calculated omission. Nor is there a reference to the abrogation of Article 370 of the Constitution in August 2019, which has shaken not just Kashmir but India, and is inarguably a hard-to-ford watershed in the life of the making of India as a republic with the consent of all her people. Did the publishers impose a cut-off date on the author?

We shall never know. The introduction, which is in the nature of a preface, is left undated. The last part of the book, in patches, may elicit the interest even of the discerning reader, as when the author speaks of the India-US-Japan “axis”. Since there is no elaboration, it is hard to say if this was unintended or is an example of a Freudian slip. There are also some interesting tidbits here, as when President Barack Obama, in New Delhi as the chief guest for Republic Day in 2015, confounded President Mukherjee with his extempore rendering of the latter’s career which was so inaccurate that it made Mukherjee gasp.

The former Indian president also recalls his visit to China when, at the banquet, President Xi Jinping made the Indian head of state lecture him for one whole hour on India’s constitution and its functioning and the Chinese interpreter was kept away, except when the visiting dignitary spoke of the boundary question! The affair made then foreign secretary (now external affairs minister) S. Jaishankar sweat. If the story speaks of Mr Xi’s shrewdness, Mukherjee is silent on whether he probed the Chinese boss-man in turn. At any rate, in the book the former president’s rendering of our foreign policy approach seems anodyne. There is an absence of both nuance and gravitas considering that the author was once external affairs minister and played a long hand as cabinet minister with four Prime Ministers.

The early chapters make for dour reading, although there are some interesting reflections. At the start one may even detect some wistfulness that Congress chief Sonia Gandhi did not name Mukherjee Prime Minister, though this is not made quite explicit.

Says the author, “Some members of the Congress have theorised that, had I become the PM in 2004, the party might have averted the 2014 Lok Sabha drubbing. Though I don’t subscribe to this view, I do believe that the party’s leadership lost political focus after my elevation as president.” In the same short section, he contradictorily notes, “I firmly believe that my presence in active politics would have ensured that the Congress wouldn’t have faced the drubbing it received in the 2014 general elections.”

There is perhaps just one major bold assertion in the book, and it’s at the beginning. If the Lok Sabha election in 2014 had thrown up a hung Parliament, and even if the Congress had emerged “with fewer seats (than the first party) but promised a stable government, I would have invited the leader of the party to form the government, keeping in mind their previous track record in managing coalition governments successfully.”

And Mukherjee goes on to say with frankness, “This would have been in contravention of the convention established by the former president, Shankar Dayal Sharma, of inviting the single-largest party to form the government. He had invited Vajpayee to form the government after a hung House in 1996, despite lack of clarity on Vajpayee’s numbers. I was convinced even before the 2014 elections that I would not be neutral between stability and instability.”

The level of the book would have been lifted if there were more glimpses of candour and clearly enunciated assessments in place of routine descriptions of institutional plodding. Forays into colonial history with references to the early 19 th century Subsidiary Alliance and mid-19 th century Doctrine of Lapse in the context of the conceptual emergence of the idea of federalism in India are clearly out of place. The editors have been less than alert in overlooking slips such as the year of Afghanistan joining SAARC. All said and done, though, the book will hold a place, being the reflection of one of modern India’s most experienced politicians who held nearly every top job in the country except that of Prime Minister.pranab