Metaphors of nature to the fore

Nature is constantly changing. It is constructive and sometimes destructive. 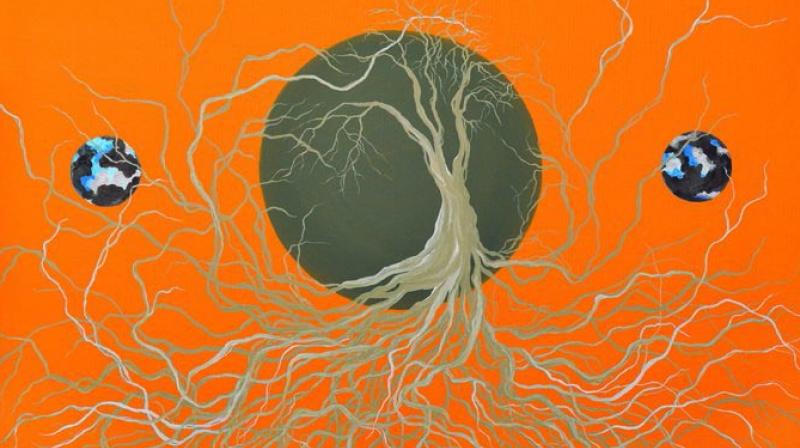 It is my theory that artists who do something else in addition to painting like writing with equal alacrity, their work goes through different highs and the changes are more frequent and perceptible. I suppose it means that a more or equally stimulating brain activity is shaping the growth patterns of the art as well. I had written about artist Kota Neelima a few years when her show was held in Delhi. I was pleasantly surprised to see perceptible growth in her oeuvre and the subjects that she has chosen to paint in her just concluded show.

Neelima aptly titled the exhibition Metaphors of the Moon and the series chart the trajectories of the mind as it travels from absence to presence in a cyclic repetition. “The mind is the metaphor for the Moon. It indicates the cyclic process of thought, its creation, immersion and regeneration, and also is a metaphor for absence and presence. The lessons of the Moon are about the fragility of reconciliation and the assurance of restoration. The paintings are a visualisation of the individualised collective mind that embraces the one and the infinite, with the same ease as it deals with universal pain, suffering and loss. The mind engages naturally with the task of the larger and impersonal, rather than the smaller and personal. Like the Moon, the mind too reduces itself to fit the mortal world. The mind binds itself to the temporal, despite the knowledge of its timelessness, and expanse,” says Neelima candidly. 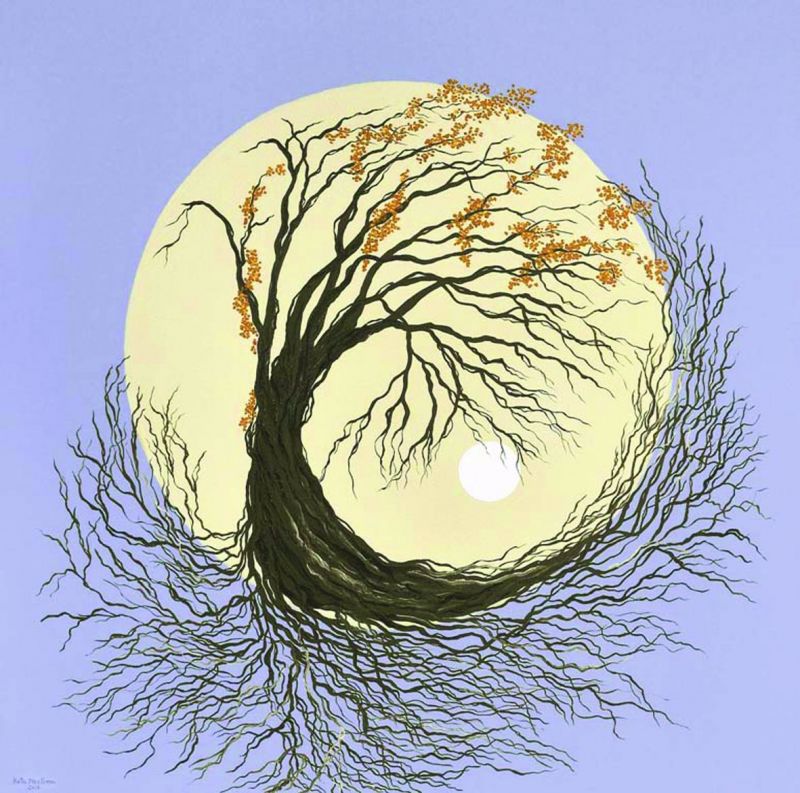 There is an infectious enthusiasm in her persona that stems from deep conviction that change is a given and yet alleviation of human suffering is a goal worth pursuing. In many ways the new series is based on her new book, Widows of Vidarbha — Making of Shadows, (2018, Oxford University Press) that talks about the narratives of widows of farmers who had committed suicide due to agricultural distress and debt burden. The book tracked the case-studies of 18 farmer suicides over four years to reveal how the widows struggled to survive and remained invisible to the state, the society and even their own families. I read sections of the book and it left me deeply angry at the horrific callousness of the state and the families.

Neelima takes the contention further: “The absence, like the presence, is a much-misunderstood notion. The absence of pain is not happiness, the absence of faith is not treachery, the absence of difference is not uniformity, and the absence of isolation is not togetherness. The absence represents reconciliation of a world torn apart by loss, defeat, desperation and death. A human kind born and bred on poverty and deprivation must learn to reconcile to the absence, and rationalize the presence.” The focus on the roots again used as a metaphor of the rootedness of a woman no matter if the branches and leaves sway gauntly too has its stories to tell. 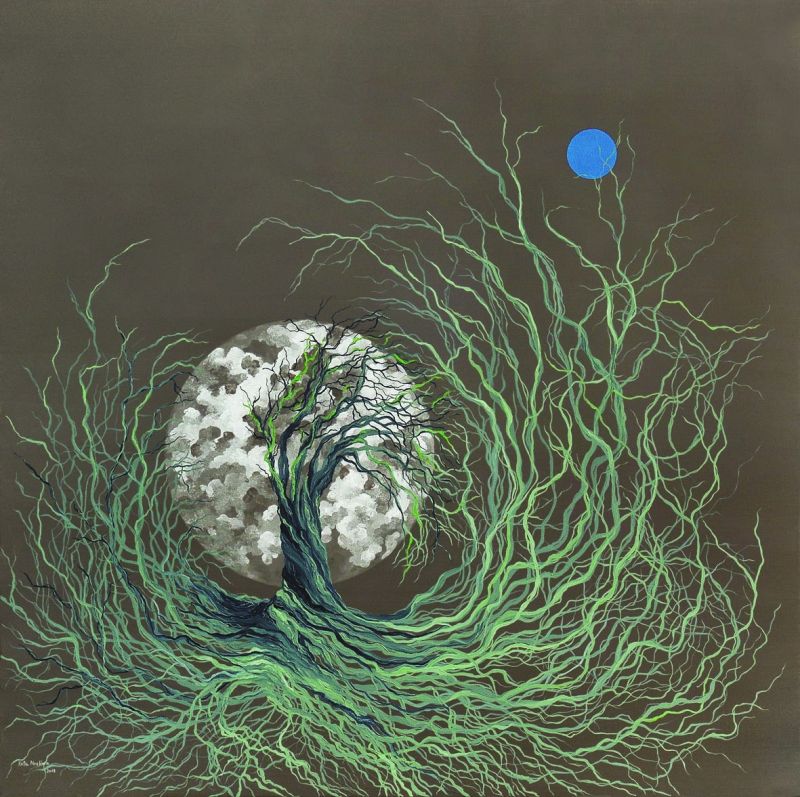 The best part about going to the Lalit Kala Akademi galleries in Delhi is the host of shows that one gets to see under one roof. Sometimes it can get very unnerving to see so many different styles and some can be very disappointing too. But this time I was overjoyed to see the work of Madan Singh, a young ceramic artist from Banaras Hindu University. Presently he is teaching art in Doon School and it was such a pleasure to see his work that is perfectly international in appeal and form. He is equally spontaneous in various forms of expressions like pottery, ceramic sculpture, wall-art, installations and mixed-media. The organic quality in his works and his technical excellence is truly noteworthy.

Madan is very inspired by nature and his work is a reflection of his intense relationship. “Changing colours and shapes of leaves by effects of sunlight, random advancement of roots, and construction of buildings tell us that there is a form all around us. Blooming of flowers in a group, proliferation of mushrooms in a bunch, germination of seeds almost simultaneously yet with peculiarities, and hanging of fruits in a bouquet, all have entered my works. These random forms are made up of units in various geometrical forms. I am using shapes of these geometrical forms in my works which interest me a lot,” he says.

Nature is constantly changing. It is constructive and sometimes destructive. Madan says he tries to incorporate these changes in his work. “Seed germinates into a sapling and finally in to a tree, completing its life cycle akin to human life. Despite the similarities and deep relations, humans are being torn away from joys of nature,” laments Madan. His use of colour in his work often like stamping in some places and as a metaphor for continuation in other bestows a Far Eastern quality on them that is very charming and attractive. 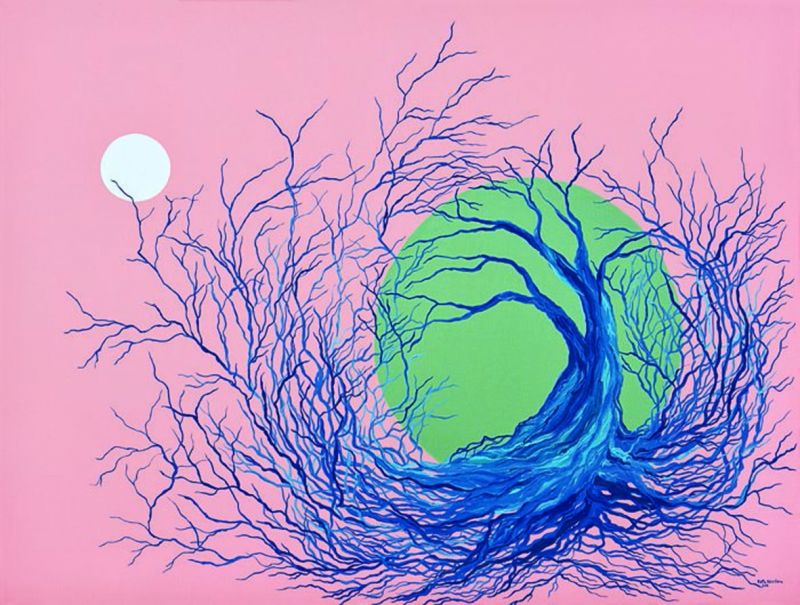 When young artists showcase their work, it is a perfect reflection of how they have been taught and the institution they trace their roots to. The show was so beautifully displayed that that it brought out the forms and the colours magnificently and it gave one complete indication that all is well in the art department of the BHU. Madan is definitely an artist to watch out for in the near future.