Duchess of Sussex repeats her outfits like a pro

Meghan Markle proves that she's the queen of recycling outfits. 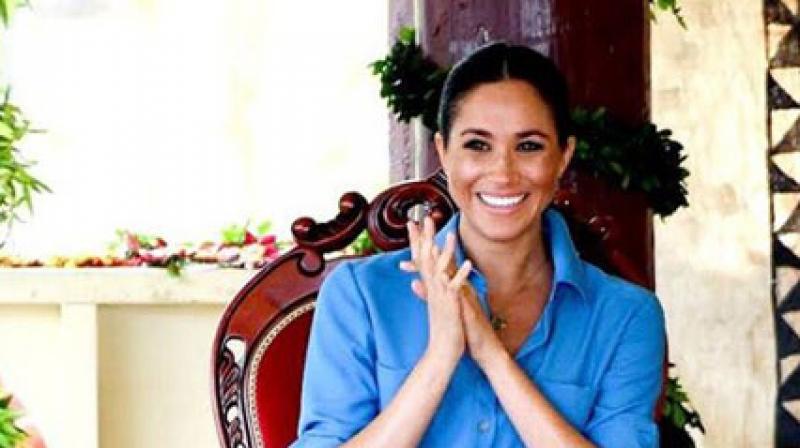 The Duchess has been spreading awareness on several issues on royal tours. (Photo: Instagram)

Washington: Wondering how to recycle your favourite outfit? Take a cue from Meghan Markle! The Duchess of Sussex, who is on her second royal tour, has been spotted repeating her old dresses like a pro. During her surprise Skype to chat with the women at the Nalikule College of Education in Malawi, Africa, the 38-year-old royal wore the same short-sleeve khaki green V-neck linen midi dress she wore back in July, reported People.

She earlier rocked the same dress when she took her son Archie out to cheer for Prince Harry at the King Power Royal Charity Polo Day. The dress, by Lisa Marie Fernandez, is designed for a loose fit, making it a perfect summer outfit. It comes with a tie belt to cinch in at the waist if needed. Although the former 'Suits' actor appeared to leave it open, as she had done when she first wore it.

During the July outing, Archie was just 2 months old and the dress proved to be a perfect choice for the new mother to stay cool on a sunny day. "She was doting on him, there's no doubt about that," an onlooker told People at that time of Meghan, who was spotted holding Archie as she made her way from the car park to the field. "She was kissing and stroking him and bouncing him up and down," the eyewitness added.

Megan's sister-in-law Kate Middleton was there too, supporting husband her Prince William. She brought along Prince George, Princess Charlotte, and Prince Louis, making the event the royal cousins' first public play date together. The match helped raise funds for charities supported by William and Harry. Meanwhile, Meghan's Skype call on Sunday came amid the royal family's visit to Africa. Harry was present at the Nalikule College of Education, meeting with a network of young women who are supported to attend and complete secondary school with the help of scholarships through the Campaign for Female Education.

Meghan, who has long advocated girls' education, was back in South Africa with Archie, but video called in order to send her best wishes. "I wish I could be with you. We're here in South Africa right now. Archie is taking a nap! But I'm with you in sprit and I'm so happy," she said, according to video of her call shared online.

During his Sunday outing, Harry saw the impact of UK investments to ensure that girls obtain at least 12 years of quality education. The project is supported by the Queen's Commonwealth Trust, of which Harry is president.

Harry will return to South Africa later this week to meet Meghan and Archie in Johannesburg for a few more outings before the family returns home to London on Wednesday. Harry and Meghan have been raising awareness of several issues while on the royal tour, including counter-poaching operations in Malawi, violence against women in South Africa, elephant protection in Botswana and landmines in Angola.