Don’t be a copycat bride 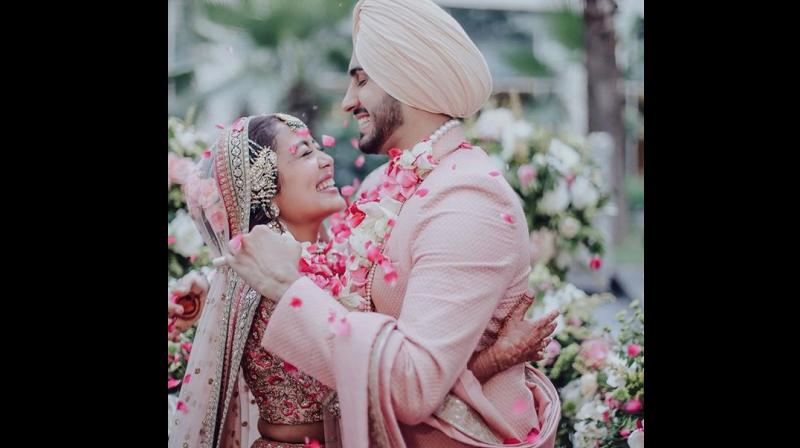 uncanny similarities: Neha’s wedding outfit — with hues of pink and peaches, which she wore on her Gurudwara wedding had uncanny resemblance to the outfit Anushka Sharma had worn for her wedding reception

The recent wedding of Bollywood singer Neha Kakkar with her beau Rohanpreet Singh on October 24 took many by surprise. Neha had earlier shared a poster from the duo’s upcoming song Nehu Da Vyah leaving fans confused as to whether the two are really getting married or not. Though Neha’s fans haven’t been able to stop gushing over her chemistry with her now husband, Rohanpreet, the singer’s wedding has been making headlines and not all for the right reasons.

As the rituals of Neha’s wedding started and pictures of the functions started surfacing on the Internet, self-appointed critics among the netizens decided to critique her turn-out. Neha’s pure red bridal lehenga looked like the one Priyanka Chopra Jonas had worn in December 2018 for her Hindu wedding ceremony with Nick Jonas. The ‘critics’ also noticed another of Neha’s wedding outfit — with hues of pink and peaches, which she wore on her Gurudwara wedding — and yet another — the white lehenga with a veil over her head, which she wore for her reception — had uncanny resemblance to the outfits Anushka Sharma and Deepika Padukone had worn for their reception ceremonies, respectively.

There was also a matter of the décor at the Neha-Rohanpreet wedding, which several social media users thought has similarities with that used at the three actresses’ wedding ceremonies.

In essence, the whole event, which was to be a special day for the couple, turned around as a debate among netizens about whether Neha had plagiarised Priyanka, Deepika and Anushka’s wedding outfits — an action, some believed, needed to be punished by nothing less than heavily trolling the songstress.

Interestingly, Priyanka Chopra’s wedding lehenga was designed by Sabyasachi, while Neha’s red lehenga was done by Falguni Shane Peacock India, who also created the sari and veil for her wedding reception. However, Neha’s pink lehenga, which greatly resembled Anushka’s wedding outfit, was a gift from none other than Sabyasachi.

While it’s only natural that Neha, who though a sufficiently well-known name in the country, may have harboured an average girl’s dreams of a wedding that resembled the fairy-tale weddings of established actresses, one wonders if her designers are to be blamed for not keeping Neha’s own celebrity stature in mind.

For instance, why didn’t Sabyasachi, who’d gifted Neha her pink lehenga, take care to notice that it had striking resemblances to Anushka’s lehenga, which he had himself designed?

According to Delhi-based designer Deepa Sondhi, if a bride is a public figure and has a handsome following on social media, she should be advised by her designers and especially her personal stylist not to blindly ape any other celebrity’s look. “This also takes away the style factor of the bride, making the whole affair more of a controversy,” adds Deepa. “I personally feel Neha could have been advised to avoid wearing a lehenga similar to that of Priyanka. Such a similar ensemble made her lose her identity as a bride,” says Deepa.

“The designers could have dressed her in a lehenga befitting her persona,” feels Deepa.

However, designer and stylist Anuradha Raman believes the designer and stylist have no play in such a matter. “I don’t think that it is the designers and stylists’ responsibility to tell the bride about copy. Sometimes, the brides themselves want what celebrities have worn because they idolise them or are their fans,” she asserts, as she defends Neha for taking the call regarding her wedding trousseau. “I am sure celebrities know who wore what and when. It’s completely their call. Moreover, what’s the big deal about wearing an item that looks like something someone else wore earlier?”

Bride in her persona

It is true that everyone is unique, possessing a thunder, which no one can steal from one, whatsoever. However, considering the wedding day as that special day in life, is it advisable for even lesser-known people to blatantly copy someone’s else’ look, even if it is a celeb’s?

Then again, one also wonders if designers mass produce their clothes once it’s worn by celebrities given that their websites have many models and brides posing in similar outfits.

However, Deepa doesn’t think that designers mass produce the designs worn by their celebrity clientele. “Firstly, the designers never go in for mass production of couture ensembles. That’s largely done by smaller brands, who copy famous designers. That being said, I feel designers do tweak or change the colour and yet do something similar, as worn by their famous client,” she explains.

Anuradha also agrees that designers usually only retain a sample of the outfit to take fresh orders for other customers. Truth is, at some level, everyone usually wants to look like a celebrity on their wedding day. And especially in the last three years after Anushka–Virat, Deepika–Ranveer and Priyanka–Nick Jonas’s wedding, to-be-brides and grooms have been hugely ‘inspired’ from the three celebrity couples’ wedding day ideas. And yet it remains that it is a bride’s prerogative what she wants to wear on her special day, and that she can design her outfit using references from designs she has seen on her favourite models or celebs. But if it hurts to hear even a largely uninvited set of ‘onlookers’ passing judgement on your special day, it would best you stay off copies and choose a trousseau that enhances the essence of your identity.

Deepa even goes to the extent of suggesting that irrespective of whether the bride is a celebrity, she should seriously consider a special look for her wedding day. “This is a special day for every girl and her dressing style is a reflection of her personality, which she will cherish throughout her life. So it is best for girls and women to retain their identity as brides,” she adds.