The upcoming wedding season will see a mix of traditional silhouettes and modern designs along with interesting colour combinations. 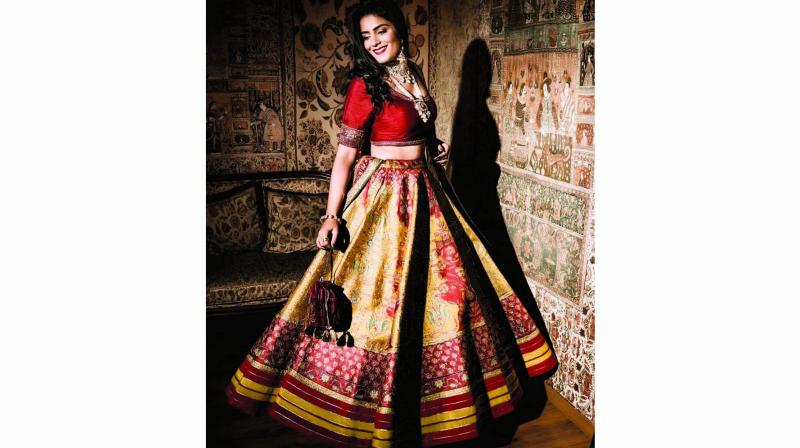 Although new colours are exciting for brides, many are going for the traditional red, but experimenting with different shades.

As the temperature drops and we get closer to the end of the year, apart from Christmas jingles, wedding bells also starts ringing. And this wedding season is going to be a little different than the previous ones. As fashion evolves, wedding collection gets their fair share of experimentation and these will be on display this year. Bridal wear now mainly comprise of indo-western styles and cuts that not only accentuate the body but also allow freedom for the bride to move freely.

Despite being experimental with colours, brides still want to stick to traditional style, believes celebrity stylists Eshaa Amiin. She says, “The silhouette of a lehenga-choli remains the same but the choli has now become off-shoulder, Victorian styled and other different styles have been incorporated.”

Red is the quintessential shade for Indian weddings, but modern brides are now experimenting with lighter shades like lilac, pastel and tend to gravitate towards off- white with gold embroidery. Veteran fashion designer Ritu Kumar says, “When the bride is going for a destination wedding, they go for off-white or gold, even yellow as it is a very hot colour at the moment - mostly things that go well on a beach. However, normally for weddings in the city, the prominent colours are still red, fuchsia and purple.”

Although new colours are exciting for brides, many are going for the traditional red, but experimenting with different shades. Well known fashion designer Nivedita Saboo, agrees and adds, “Red is a colour that is always in vogue, just that the usage and application of red keep changing. At one point it’s a sindoor red or a tomato red, then crimson and then a deep wine and then finally this season the oxblood, red can never go out of style as it is a striking and stunning colour.”

On the flip side, brides are also looking to go a little offbeat with a colour palette that includes pastels as well as metallic. And according to Nivedita, “Brides are definitely looking at non-traditional styles and colours. All the metallic tones, lighter tones, and pastels are completely in vogue. We see the amalgamation of several western silhouettes combined with the soul of India. There is a lot of Indian heritage textile which is being used in a western sensibility.”

When it comes to the modern bride, the bridal wear is completely focused on comfort and having fun at thier own wedding and not being burdened by the weight of the garment. Ritu Kumar agrees and says, “Girls prefer wearing lighter clothes as it is a younger look and not heavily ornate. The younger girls don’t want to look as if they never want to wear the garment again.”

While on the contrary, Eshaa feels that heavy lehengas are still in trend. She says, “It is not only the embroidery that remains very heavy, but also the accessories like maangtikas and chokers are heavily embellished.”

Although the bridal wear is heading a new direction, the traditional red saree is expected to make a comeback. "People want to buy a banarasi red sari, which they can keep in their wardrobe and mix it with a net chunni, or another woven chunni so that they can wear them at different events,” says Ritu Kumar.