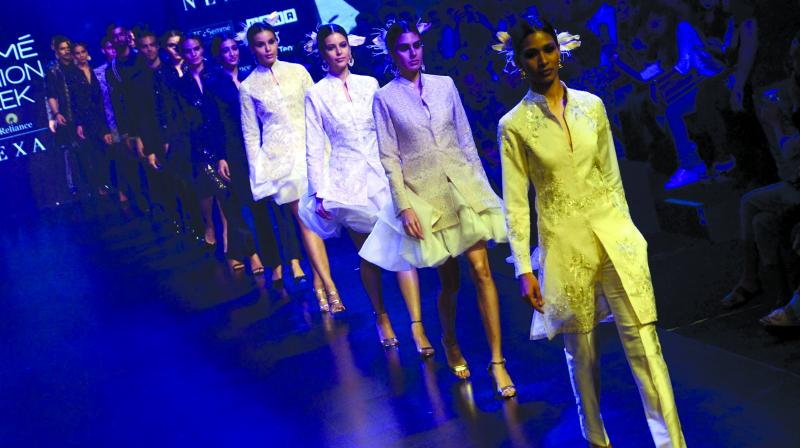 Perfect choice for festive wear, this collection showcases Bandhgala in a glammed up avatar.

Reviving the traditional Bandhgala jackets, Raghavendra Rathore’s new collection ‘An Ode To The Bandhgala’ was an amalgamation of heritage with sophistication. Originally a men’s outfit, Raghavendra’s label for the first time tweaked the style for women as well.

Talking about the collection, the designer says, “We are exploring the boundaries of the classic bandhgala for women for the first time. The jackets have been inspired by fabrics and textiles from across India.”

His show on the day 4 of the Lakme Fashion Week saw models walking down the ramp donning a wide variety of outfit, be it a bandhgala paired with a formal suit, a textured sherwani and white waistcoat, a printed kurta under bandhgala or a one-button, narrow-lapelled jacket with peaked lapels. Women’s collection, on the other hand, featured bandhgala jackets paired with different length of skirts. 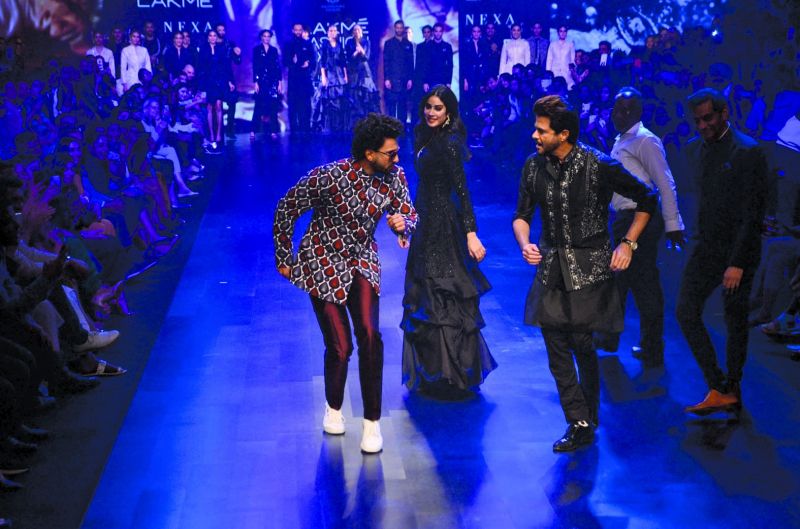 Although a style rooted deeply in India, Raghavendra feels bandhgala can go international. “bandhgala is not an Indian style anymore, it is something that people like to wear everywhere. We have a lot of customers in the middle east, people in London are wearing the bandhgala, so, to me, it’s the only Indian outfit that can transport itself to any part of the world,” he says.

Even in the biggest fashion week in the country, men’s fashion is always considered secondary to women’s. Commenting on this Raghavendra says, “I think menswear is not necessarily needed to be in fashion weeks because the sales happen in a different way. I think it’s a booming business and a very big market and the future is moving to the format of retail online.” After being in the industry for over 20 years, Raghavendra feels that men are now more aware of fashion. “I think men are more confident in what they want to buy and want their personality on their clothes. They also want to shop off-season — in winters, they’ll want a summer jacket, and this is why a bespoke brand like us are more popular with these kinds of clients,” he adds.

After starting his own fashion school, Gurukul School of Design, last year, Raghavendra feels that innovating with time is a crucial step in keeping education at par with the industry. “A person today going into a school must prepare themselves for the future because it’s a very disruptive future. With the internet, it’s not going to be the same,” he explains. “Education must be special and newly designed and not designed 20 years ago or 10 years ago. I feel there is a grave need to look at how education, and not just in fashion, is disseminated in India, we need people to be able to innovate a lot more and not only worry about the problem and fix it, but to be able to innovate in a big way,” adds Raghavendra.

A one of a kind show, the showstoppers Janhvi Kapoor, wearing a flouncy black long skirt teamed with an exquisitely designed tone-on-tone black embroidered jacket and shimmering bralet glided down the ramp, whereas Anil Kapoor rocked the ramp in a black embellished Bundi over black kurta and trousers and also carried his jhakaas attitude. Although the fashion industry is often blamed to rely on Bollywood, Raghavendra sees it as a method of communication. “I think Bollywood works car and several other products. In fact, we see more endorsements away from fashion. So, Bollywood is the communication language of India, I think it’s fair to use that as a communication point. It’s not that it’s dictating fashion.”

A stunning fashion show ended with a surprise as Ranveer Singh joined the showstoppers and the designer and entertained the audience with his crazy moves.