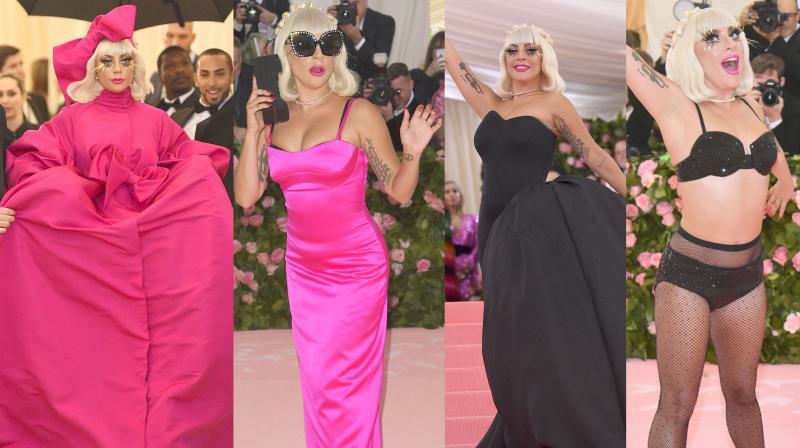 The singer, one of this year's co-host for the Met Gala 2019, caught everyone's attention with her dramatic costume changes on the red carpet of the big event. (Photo: AP)

New York: American singer-songwriter Lady Gaga surely knows how to make a serious style statement. The singer, one of this year's co-host for the Met Gala 2019, caught everyone's attention with her dramatic costume changes on the red carpet of the big event.

Gaga put her own spin to the evening's theme - 'Camp: Notes on Fashion'. The Oscar winner wore a stunning billowing fuchsia gown by Brandon Maxwell, reported CNN. The dress quite literally stopped the traffic, thanks to the 25-foot train which was carried by a number of men who sported tuxedos for the mega event and carried black umbrellas.

They were followed by a person pulling a pink wagon that read, "Haus of Gaga." Inside the carriage were clear luggage cases from Maxwell's Spring 2019 collection, accessories including a hairbrush and sunglasses, cowboy hats and a black phone from the '90s. To complete her look, Gaga wore a matching pink bow and big lashes that transformed into gold accents at the tip, reported E! News.

However, when she and Maxwell walked on the red carpet, they began a dramatic work of performance art. The men wearing tuxedos held black umbrellas, as the artist after parading up and down in her pink ensemble slowly removed her jacket and hair-bow to reveal an asymmetrical black strapless gown underneath and posed with one of the umbrellas.

Then in a move which no one was expecting, she removed her black gown to reveal a body-hugging pink dress and menagerie of Tiffany & Co diamonds. The 33-year-old singer paraded and posed in the pink dress with full props in hand. She added just the perfect amount of oomph with extra-large black sunglasses and carried a brick-like phone.

But she wasn't done yet, the star then slowly slipped out of the pink dress to reveal her black bra, fishnets, and pair underwear and posed on the stairs. In total, the 'A Star Is Born' actor pulled off four dramatic costume changes during her time on the red carpet!

The Grammy-winning singer made her grand return to the red carpet at the Met Gala after taking a brief hiatus following her awards season run, where she earned quite a few awards for her role as Ally in 'A Star Is Born'. And it's safe to say that Gaga was reborn as the pop icon Lady Gaga, pulling out all the fashion stops as she honoured the theme of this year's Met Gala!

At the Pre-Met Gala dinner yesterday, the singer pulled off the ultimate camp look by wearing a black and white Fall 2019 dress from Marc Jacobs with a pair of boots. The fashion jamboree is being held inside New York City's Metropolitan Museum of Art. The show will include 175 pieces from men's and women's wear.