AK-OK: How Anamika Khanna's sons are stepping up to carry forward mom's work 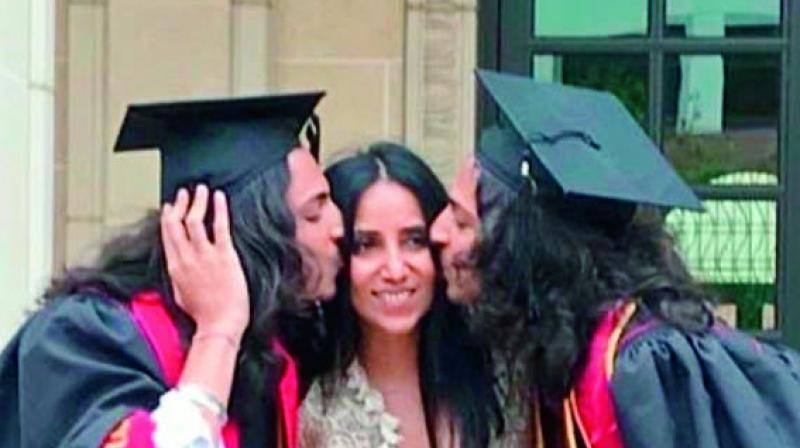 The self-taught, Kolkata-based designer Anamika Khanna is known as the empress of embroidery. Her works are so intricate that sometimes they seem like textures. The designer now prepares to pass on the baton to her twins, 25-year-old Viraj and Vishesh, who’ve joined her in the business.

“I’ve always left them free to find their own course, and they even seriously considered professional golf. They are, however, slowly getting immersed into the business of fashion, bringing their millennial mindset and thought processes that bustle with youthful energy,” says Anamika.

Anamika’s health problems made it imperative that the boys help, if not take over the business. “Mum fell ill very recently, which made everyone in the family very cautious. We realised she needed to slow down and make changes in her lifestyle, so we began creating more structure and delegating work. Now Vishesh, I and our dad have taken a lot of the responsibility. She still works as she did before but not as stressed. Also, she doesn’t wake up so early anymore — she knows she must slow down,” says Viraj.

Taking after a phrase they often used for checking on their mom’s health, the duo launched the line “AK-OK”, which got an endorsement from Sonam Kapoor, who wore it to Isha Ambani and Anand Piramal’s wedding with the text imprinted on it.

Vishesh, the quieter of the twins, confesses that what fascinated him about the enterprise is the technical side of garments, pattern construction and tailoring. “I’ve loved extremely difficult things that require immense amount of practice and self-study. I believe passion towards something is not natural; it comes when you totally immerse yourself in a subject. I had to put in that effort and over time I came to love all the intricacies of making garments,” he says with a chuckle.

It’s been a win-win for Anamika. “They both have key inputs in every aspect of the business, which is very interesting,” she says.

Anamika always considered discipline and focus on efforts more important than results, a belief system that remains an inspiration to the boys. So, when something doesn’t work out as expected, they learn to figure out what went wrong and work on improving that.

“There was never any negative criticism of any sort, just motivation and ‘lectures’ on how to up the effort,” she explains.

“My mother always believes in pushing yourself to your limit. She’s an example of whatever she preaches... she’s designing before work, during work and after work. She has always told us that to achieve something that no one has achieved one has to do things no one’s willing to do. And that is one reason Viraj and I have always been obsessed with whatever we do,” says Vishesh.

Change for the better

Having headed a 22-year-old label, Anamika perceives business as very personal, with a focus on couture, while the twins hope to make it more standardized and automated. “Viraj studied business at the University of Southern California (USC) while I did a whole bunch of things. USC didn’t have a fashion design course, but the industrial psychology and business management courses helped us learn about how to make things more global,” adds Vishesh.

Anamika understands that customers now come with an individualised thought process. For instance, the Anamika Khanna signature is special because of the embroideries, which they focus on. However, to stay updated with the new generation of well-travelled clients, Anamika believes in designing and working on embroideries that are edgier and influenced by the current themes of the world rather than just sticking to older traditional inspirations.

It is almost given that where there are siblings, there must be rivalry. Surprisingly, however, the twins tell us that they have never fought. There is never an argument about anything.

However, the brothers understood the need to separate roles and not intrude into each other’s decisions. So, while Vishesh focuses on design and its technicalities and running the menswear department, Viraj is mostly into finance, production and other related areas. “That keeps the business healthy and non-political, I suppose. The biggest challenge would be to stay true to the brand aesthetic no matter how experimental we choose to be,” says Viraj, as he tells us how AK-OK is just the theme of one of their RTW collections, which is part of the Ana-Mika line.