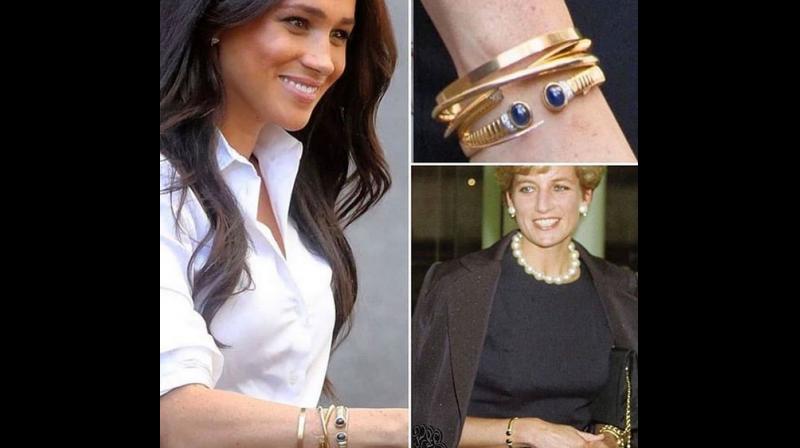 Meghan previously rocked Princess Diana's butterfly earrings and the gold bracelet during her and Harry's royal tour Down Under in October. (Photo: Instagram)

Washington: Meghan Markle officially wrapped up her maternity leave by launching her clothing line. The Duchess of Sussex modelled pieces from her new collection for its launch and chose very meaningful and special accessories to complement them.

The Duchess launched the Smart Set capsule collection, a workwear line created in collaboration with Smart Works, of which she is a Patron. The charity works towards providing unemployed women with free clothes and job interview training, reported People.

The royal rounded off her look by wearing a pair of butterfly earrings previously worn by Princess Diana during a trip to Canada on May 3, 1986, a year after she gave birth to Prince Harry.

Although the former 'Suits' actor's bouncy blowout mostly hid the special accessory, fans caught glimpses of the stunning piece of jewellery as she tucked her hair behind her ears.

The 38-year-old royal also stacked gold bangles on her right arm, including heirloom from her late mother-in-law, a cuff bracelet featuring stunning diamonds and blue stones that Princess Diana sported while visiting the Lord Gage Centre for Old People, a Guinness Trust Home, in East London in 1990.

Meghan previously rocked Princess Diana's butterfly earrings and the gold bracelet during her and Harry's royal tour Down Under in October. Upon their arrival in Sydney, Meghan paired the beautiful pieces together with a fitted white sleeveless dress.

Meghan also has the late royal's emerald cut Aquamarine ring, which Princess Diana wore to a 1996 gala dinner in Australia. The Duchess of Sussex debuted the stunning piece as she stepped out for her wedding reception sporting a custom silk Stella McCartney evening gown, and Meghan wore the ring again in Tonga during the couple's fall tour.

Additionally, the Duchess of Sussex's engagement ring is made up of three diamonds, with one large stone in the centre flanked by two smaller stones on the sides. The two side stones are from Princess Diana's personal collection, while the centre stone is from Botswana, a country that is close to Harry's heart.

Later this month, Meghan and Harry will be jetting off for their first royal tour as a family of three.

The royal couple will take Archie to Cape Tape Town, South Africa, on September 23. Although there's no confirmation as for when the royal fans can expect to see their son, the first scheduled stop of the pair's visit is to a township.

They will leave their little son, who was born on May 6, with his nanny as they start the official first leg of the tour.