Virgil Abloh’s latest inspired by the King of Pop. 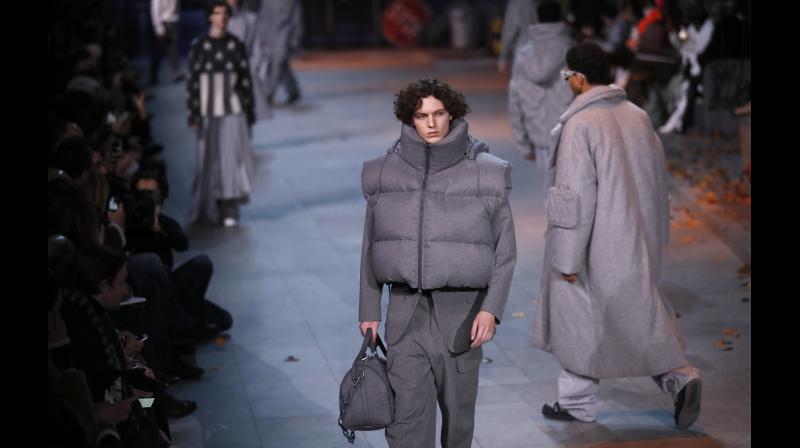 Parent group LVMH spared no expense to promote the brand at a time when menswear is on the up, constructing a set complete with steam rising from manholes. Celebrities including Naomi Campbell looked on, sat on doorsteps.

It is betting on Abloh - a friend of singer Kanye West and DJ-turned-designer who helped made hoodies a luxury staple - to broaden Vuitton’s reach with male shoppers, as it pushes menswear at its Christian Dior, Celine and Givenchy labels too.

The collection featured nods to the late King of Pop, though aside from the sparkling gloves and wide-brimmed fedora hats that were among Michael Jackson’s trademarks, most looks were more subtle, in a range with heavy doses of beige and grey.

They included coats with a military cut, for instance, or leather jackets in a bold red often favoured by Jackson, who was described in show notes as “lightyears ahead of his time” in the way he carved out his style and identity.

With a hoodie or two in sight, sharp tailoring with layered suits also featured heavily in Abloh’s second outing, confounding expectations he would rely too heavily on the urban style he became known for with his Off-White brand.

Luxury groups are experiencing a boom in menswear sales, traditionally a smaller sideline, thanks to a streetwear trend reflected in the success of items like pricey sneakers. But while this has attracted new clients, brands are also increasingly wary of cutting themselves off from a potentially larger crowd and of “streetwear fatigue” setting in. Paris men’s fashion week - following London and Milan - runs until Jan. 20.