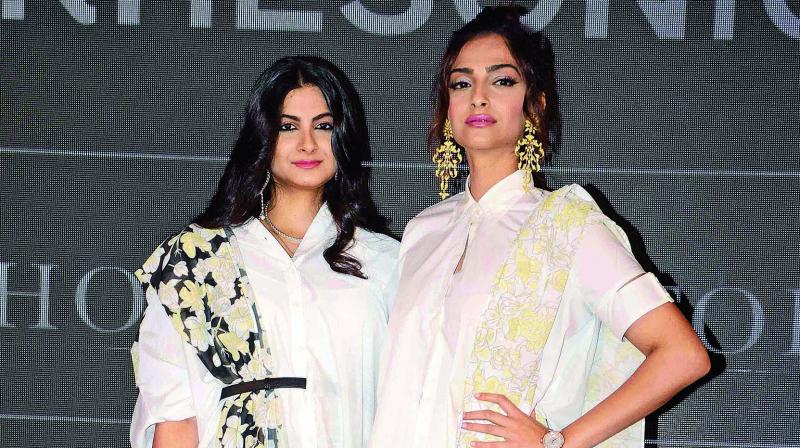 Sonam Kapoor is the certified fashionista of Bollywood. So when she launched her new fashion brand along with sister Rhea Kapoor, it became the talk of B-town. Rhea has been styling Sonam for a while now, so it was little wonder that the sisters jumped at the idea of making it big on the fashion scene. Soon, they launched seventeen stores of their brand Rheson. “Quality is key,” Sonam said. “The more we adhere to our quality control, the more it will be liked by all. Moreover, we are trying to be desi in our designs, as we too would like to keep wearing our own brand,”  she adds. The sisters have been mindful of the pricing, as Sonam says, “A low-priced line with the best of quality will literally be our motto.”

Launching the brand has been no less than a marathon for Sonam and Rhea who says of their journey, “We opened quite a number of stores. It was pretty stressful.” Stress apart, what didn’t add to their woes was sibling rivalry as is wont to happen. The sisters are very comfortable with one another. Sonam said, “I have always liked competing with myself. We have different tastes and choices and are very different people with diverse interests. I am a person who has always believed in going ahead with my interests, irrespective of the competition. In fact, I am keen on pursuing what I like to do and have tried to excel in it. Thus, in my own space, I have tried to be a good sister, daughter, and so on.”

Rhea credits their mother Sunita Kapoor for the bond they share. “Our mom has taught us to balance our love for each other. She has taught us to value the likes and dislikes, know the flaws and good points of each other as well. Thus, accepting our flaws and also correcting each other from time to time is what we sisters do,” Rhea reveals.

Rhea admires the way Sonam has taken criticism in the film industry. “She proved to be a stylish actor ever since she entered the field of glitz and glamour. Our father always taught us to create our own space and then rule. People would embarrass her and say that she’s just ‘into fashion’ and not acting, but she held her place.” Both girls have been vocal about their opinions on the patriarchal nature of the industry. “People don’t even discuss what male actors wear at the Red Carpet. But female actors get noticed. How did she walk? What she wore, etc.” The unfair treatment is also meted out when a woman-oriented story is narrated, feels Rhea. “Everyone will ask, what’s the catch? And then ask why make such a film! Is it a chick-flick? Why? A film is a film! Why even compare and contrast?”

Sonam and Rhea both recall how their parents actor Anil Kapoor and Sunita were extremely supportive and have never been sexist. “I remember when my films were picking up at a slow pace, everyone in the industry would tell me that a girl’s maximum age on the silver screen is not more than 30-35 years. Our father has never ever made us feel that way. He would says, ‘You’re passionate about acting, so go on. There is no age bar whatsoever.’ My parents were always empowering to us. We are proud to have a father like Anil Kapoor, who has never made us feel lesser in any sense for being girls.”

The proud daughters laugh about how they did not like Anil’s earlier fashion sense. “Dad’s old dressing and styling was not so good,” Rhea said. “We are styling him now, so obviously he looks the best.”