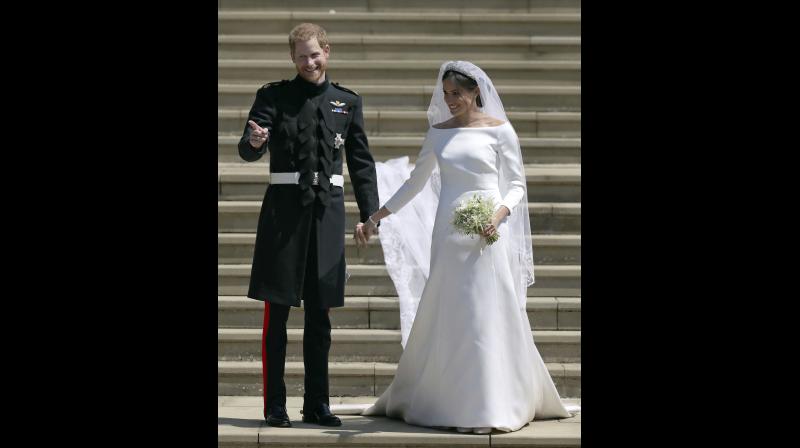 Meghan Markle and Britain's Prince Harry stand on the steps of St George's Chapel at Windsor Castle following their wedding in Windsor, near London, England, Saturday, May 19, 2018. (Photo: AP)

WINDSOR, England: Meghan Markle picked a sleek sculpted dress by the British designer of couture house Givenchy for her marriage to Prince Harry on Saturday, worn with a five-metre long veil and a sparkling diamond tiara lent by Queen Elizabeth.

The pure white long-sleeved gown with a boat neck had been eagerly anticipated by royal fans around the world, with speculation over which designer would be chosen starting soon after the couple announced their engagement in November. As the bride stepped out of her classic Rolls-Royce, Kensington Palace announced that Clare Waight Keller, who became the first female artistic director at famed French house Givenchy last year, had secured the coveted role of making the dress.

The 47-year-old, previously at Pringle of Scotland and Chloe, met Meghan earlier this year and the two worked together on the design, which “epitomises a timeless minimal elegance”, Kensington Palace said.

“The focus of the dress is the graphic open bateau neckline that gracefully frames the shoulders and emphasises the slender sculpted waist,” the palace said in a statement. “The lines of the dress extend towards the back where the train flows in soft round folds cushioned by an underskirt in triple silk organza. The slim three-quarter sleeves add a note of refined modernity.”

The gown made of double bonded cady silk with a sweeping train was simple in style, which won praise from fashionistas. Edward Enninful, the editor of British Vogue, called the dress “beautiful” while bridal designer Raishma said the gown was “an example of couture design at its most classic and timeless”.

“It was not a Cinderella choice, not one that spoke of fantasy or old-fashioned fairy tales, but one that placed the woman proudly front and center,” Vanessa Friedman, fashion director and chief fashion critic at The New York Times, wrote. “It underscored Ms. Markle’s own independence by divesting her of frippery, while also respecting tradition and keeping her covered up.”

On social media, fans mainly showered the bride, who wore her hair up, with compliments, some even posting an image of Cinderella. Outside the wedding venue in Windsor, well-wishers were divided over its simplicity. “It was simple and elegant,” 23-year-old Emily Devaney from New Zealand said. “It’s probably hard to dress for a royal wedding - you probably don’t have much you can go with but I thought she looked beautiful.”

Nursing student Linda O’Dwyer said it was “very modern and classy” and she preferred it to the lace-embroidered gown Kate Middleton wore at her 2011 wedding to Prince William. “It was like (Meghan) didn’t want it to be too over the top with lots of embroidery. It really suited her style,” she said.

However spectator Jennifer Hill, 69, described it as “very plain”. “I’m not surprised but slightly disappointed,” she said. “I thought it might be a little more flamboyant but it was very simplistic. I prefer her hair down.”

The well-kept secret over who would design the dress had kept royal fans and fashionistas guessing for months. Among the those cited as contenders were labels Ralph & Russo and Burberry as well as designer Stella McCartney. Waight Keller, whose name has now been catapulted into the global spotlight, described the chance to work on the historic occasion as “an honour”.

“We wanted to create a timeless piece that would emphasise the iconic codes of Givenchy throughout its history, as well as convey modernity through sleek lines and sharp cuts,” she said in a statement.

Meghan’s long veil, made of silk tulle, was decorated with a trim of hand-embroidered flowers in silk threads and organza, the palace said, and paid tribute to the 53 countries of the Commonwealth. “Ms. Waight Keller designed a veil representing the distinctive flora of each Commonwealth country united in one spectacular floral composition,” the palace said.

Prince Harry last month was appointed a Commonwealth youth ambassador. Queen Elizabeth lent the 36-year-old bride a historic tiara for the occasion. Made in 1932 for Elizabeth’s grandmother Queen Mary, the sparkling diamond and platinum bandeau has a centre brooch dating from 1893.

Meghan, now to be called the Duchess of Sussex, also wore Cartier earrings and bracelet, and silk duchess satin shoes. For the evening wedding reception, Meghan changed into a Stella McCartney design - a slinky silk crepe dress in lily white, with a high neck.