It seemed that Markle had given a modern twist to a famous outfit from the Hollywood musical. 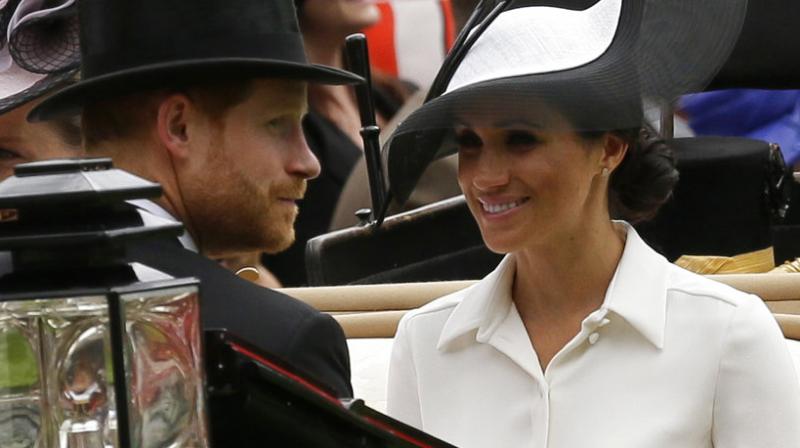 Britain's Prince Harry and Meghan, Duchess of Sussex, arrives at the parade ring with Prince Edward, Earl of Wessex, and Sophie, Countess of Wessex, in a horse drawn carriage on the first day of the Royal Ascot horse race meeting in Ascot. (Photo: AP)

The Duchess of Sussex made a dazzling debut at the Royal Ascot looking every bit as pretty as Audrey Hepburn from My Fair Lady.

Markle was seen sporting a bespoke white dress by Givenchy (her wedding designer), with a black and white hat by Philip Treacy.

It seemed that Markle had given a modern twist to a famous outfit from the Hollywood musical.

In My Fair Lady, Cockney flower-seller Eliza Doolittle – played by Audrey Hepburn – wears a frilly white gown with black and white bows and matching hat as she accompanies Professor Henry Higgins to Ascot while he attempts to teach her to speak properly.

Former actress Meghan, 36, wore £1,350 yellow gold and diamond stud earrings by Birks, a black belt and black stilettos as she rode in the Queen’s carriage procession.

Inside the winner’s enclosure, Meghan – who pinned her royal enclosure badge to her bag rather than her dress – could be seen getting on famously with Prince Charles and the Duchess of Cornwall, who was resplendent in gold Dior and another Philip Treacy hat.

According to one royal insider Charles already ‘adores’ his new daughter-in-law. ‘They have struck up a great rapport and he already has a real soft spot for her,’ they said.

Meghan made another friend in the form of the Queen’s bloodstock and racing adviser, John Warren, who has known Harry since he was baby.