Meghan Markle repeats the blue dress she rocked during pregnancy! 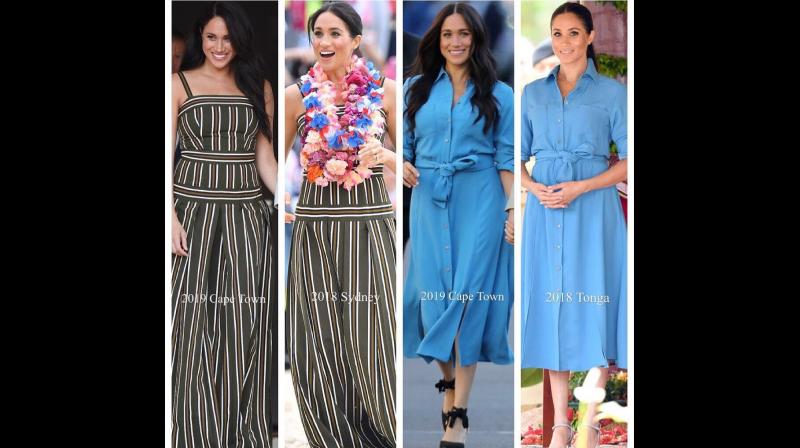 The 38-year-old royal opted for different footwear with the outfit. She paired the dress with her go-to black wedges. (Photo: Instagram)

Washington: Just like all of us, even celebrities have their favourite outfits they swear by for a special occasion. The Duchess of Sussex, too, has her own sets of favourites and for her royal tour, she wore one of her old dresses.

For a recent engagement in Cape Town, South Africa, Meghan Markle re-wore the shirtdress by Veronica Beard that she first donned almost a year ago in Tonga, reported People.

The former 'Suits' actor arrived hand-in-hand with her husband Prince Harry for the second engagement of their royal tour of South Africa recently sporting an outfit change.

After wearing a black-and-white print maxi wrap dress by Myamiko for the royal couple's first engagement of the day, a visit to Cape Town's Nyanga township, Meghan arrived at the District Six Museum wearing a blue dress featuring a wrap waist and button details down the front.

Meghan previously wore the same casual chic dress during the couple's visit to Tonga's Tupou College in October 2018. Instead of keeping her hair tied in a low ponytail as she did in Tonga, as well as at their first engagement of the day in Africa, Meghan let her hair flow in loose, bouncy waves.

The 38-year-old royal opted for different footwear with the outfit. She paired the dress with her go-to black wedges. Meghan previously wore the dress with pale blue heels.

The royal couple kicked off their 2018 fall tour, which also included stops in Australia, New Zealand and Fiji, by announcing that they were pregnant with their first child. Their son, Archie, who was born on May 6, has travelled to South Africa with his parents for their second royal tour.

Meghan often reuses her favourite pieces from her closet, notably, shoes like her Aquazzura Matilde crisscross pumps and purses. Not just Meghan, her sister-in-law, Kate Middleton, is also well known for recycling outfits like a pro!

The royal couple continued the first day of their royal tour of South Africa at the Homecoming Centre, an annex of the District Six Museum, which works to provide former residents with a meeting place to share memories and cook together.

The couple also joined a community cooking activity to showcase the varied cuisines that demonstrate the cultural diversity of the area.