All set to create magic at the finale of IBFW, season 5, ace designer talks about collection, expectations and beach fashion. 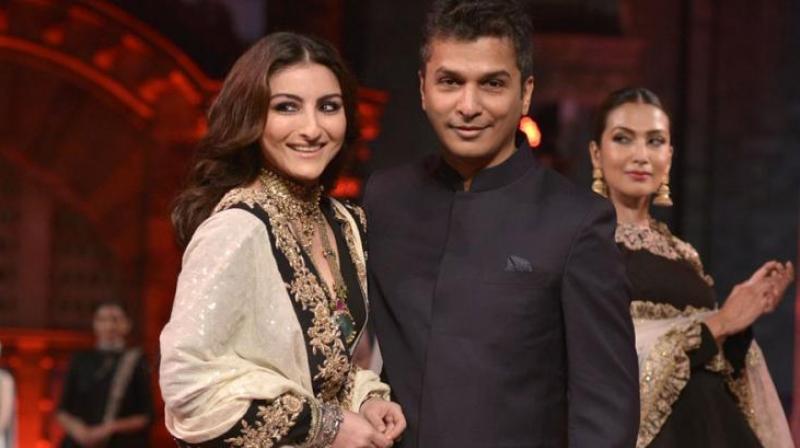 Designer Vikram Phadnis with Soha Ali Khan at an earlier event. Vikram Phadnis' collection, with embroidery in zardozi, kundan and pearl, which are his signature, is slated to be the glamorous finishing touch to the Como India Beach Fashion Week. (Photo: DC)

Ever since its inception, India Beach Fashion Week, under Pallav Ojha, has gone on to redefine the industry with its vision and outlook and in brining resort wear to the fore within the gamut of Indian couture vogue.

India Beach Fashion Week (IBFW) in the last 4 seasons has emerged as Asia's most inspired B2B & B2C consortium of designers and exhibitors under the category of Beach, Resort and Destination Bridal Fashion. Entering its fifth year, India Beach Fashion Week will showcase designs by Vikram Phadnis, Anand Kabra, Pallavi Jaikishan and Rocky S to name a few. Apart from them, Love Gen, by Bhavna Pandey, Nandita Mahtani and Dolly Sidhwani, is also set to showcase their collections at Goa.

Speaking to this correspondent, ace designer Vikram Phadnis who had started his journey in choreography before rising to fame as a fashion designer says that he is highly anticipating his first association with IBFW.

“This is my first season with IBFW. And the amalgamation from different kinds of people from different fraternities and the fact that it is being held at Goa is what makes it so wonderful.” As to what kind of an audience would the show expect he goes on to add, “Give the destination, there is going to be a lot of expats, people from different part of India, after all it is the hub of celebrations.”

He further adds that even the collection is a bit different, keeping in mind of the feel of the place.

Beach fashion, according to the man behind IBFW, Pallav Ojha, is the next big thing in Indian fashion.

Phadnis furthers the view when he says the scope for beach wear is “good” in India.

“I usually do Indian clothes but even I have started experimenting with destination weddings,” he says before adding, “People do not want to wear the typical lehenga choli anymore. They want something in fusion, something different, trendy, and fashionable. They want something that is not stuffy, not very opulent, and this is where IBFW is a great initiative”

According to the ace designer, the USP of IBFW is not only the destination but also the kind of “platform, visibility and the vision they have.”

Phadnis, to whom fashion is “a personal style statement,” will be showcasing a collection which has been inspired by Nature and will be predominantly in hues of green and blue. His collection, with embroidery in zardozi, kundan and pearl, which are his signature, is slated to be the glamorous finishing touch to the Como India Beach Fashion Week. A veteran, his flawless mastery is a given with this much anticipated jewel toned extravaganza.

The designer who says he is going there blind, this being his first time, concludes on a personal note as to what his personal fashion style is like. He says, “I am very easy and do not believe in dressing up I have a very comfortable approach towards what I wear.”