In city to celebrate win, Manushi who felt that it was a lifetime experience wants to finish her studies in medicine as well. 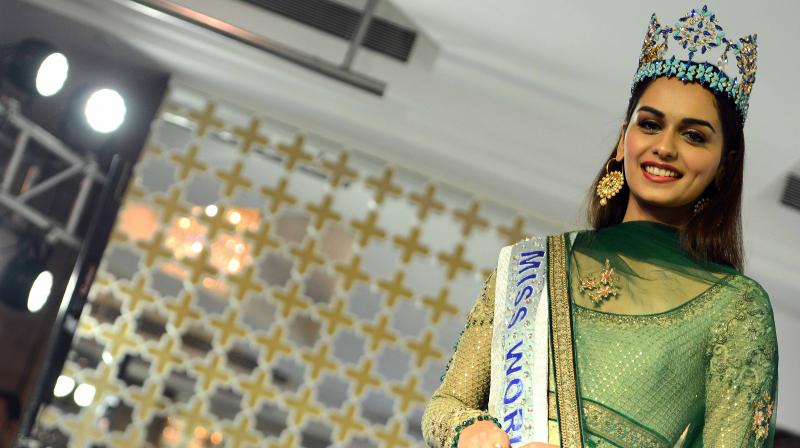 Mumbai: Bringing the blue crown back after a hiatus of 17 years, Manushi Chhillar has made India proud by becoming the sixth Indian to win the coveted title of Miss World.

In Mumbai, celebrating her win, Manushi who took a year's break after winning Miss India pageant wants to get back to finish her studies in medicine after her responsibilities get over.

Speaking about her win, Manushi said, “It cannot be described in words. You represent your entire country and the way India has celebrated the win is spectacular. They have all celebrated it like it is their own victory and the feeling that I could do this for my country after 17 years is amazing.”

The 20-year-old dressed in a green attire and with the blue 'Miss World' crown on her head sounded confident and went on to add, “A lot of people had a lot of expectations from me. But once I was there, I had a really good time. Honestly, above everything else, I enjoyed myself. It was a once-in-a life time opportunity and I was just living my life.”

Asked about things she would remember most during the competition, she said, “I made a lot of friends and I have a friend in every country now. But the one thing I would remember most is that I got to name an emperor penguin at Chimelong Ocean Kingdom in Zhuhai.”

The Chimelong Ocean Kingdom have seven emperor penguins and this was the first year that they could breed seven of them and six of the contestants were able to give their family names to the emperor penguin. “I would be really happy if Shashi Tharoor could visit that penguin,” she added cheekily.

This comes after the Congress leader trolled her on social media to which Manushi said, “It’s okay to have an opinion and that is all right. I will focus on the positive side.”

Manushi said she is excited for what the next one year has got for her as she will be travelling to four different continents with her Miss World sisters.

Talking about her plans for the year ahead, the 20-year-old title-winner, who already has her own project on menstrual hygiene, said, “I would love to devote more time to the project. Right now I can reach out to 20 village communities but with Miss World backing me and having won the Beauty with a purpose accolade will make me able to take this project to other countries as well. I realised that it is not just India but there are many other countries that need such projects and through Miss World I will be able to reach out to more such people.”

Manushi is instrumental in helping provide sanitary napkins to women in rural part of her hometown, Haryana where people still use ash, cloth and other alternatives during periods. The young winner also said she would love to contribute to Centre’s ‘Beti Bachao, Beti Padhao Yojana.”

Talking about the idea of beauty, she added, ''This is not just about outer beauty. It is not just a beautiful face that wins the competition. It is a beautiful heart that is selected to represent beautiful faces.'' She added on a humorous note, “With great power comes great responsibility.”

Commenting the recent Padmavati controversy and death-threats being issued against Deepika Padukone, Manushi said, “There is one thing all Indian women have in common -- we face our challenges head-on. As women, we should set an example and make others feel confident that they can also do amazing things.”

Manushi who wants to specialize in cardiology once her year is over further adds that if there was one thing that she was missing there in China, it was home cooked food.

“I was missing mumma’s rajma chawal,” Miss World said, adding, “That is something they do not have in ready to cook options.”

The young winner, who is being hailed as a youth icon was at a loss of words when being asked about the same.

I think I am just like any other girl, she said, adding, “I am twenty and I had big dreams and I just worked hard and by god’s grace they got fulfilled. And when people put me in that position it is an honour for me that I am able to inspire others to run after their dreams.”

The new Miss World said she was overwhelmed with the response she got from people in India after returning to her home country and added, “I felt so loved. It is a great feeling when you bring back pride to your country.”

Julia Morley, chairman of the Miss World Organisation who was also present at the press conference along with Manushi added, "India has to know that while they have waited for 17 years, some countries have also waited for more than 60 years. India should know that you have to take it as it comes. It is very much the jury that makes decisions. There are many different people around the world, and the jury chooses when it chooses."