Year ender 2017: Here’s what worked and what did not in fashion

Four designers share their views as to the highs and lows of fashion this year. 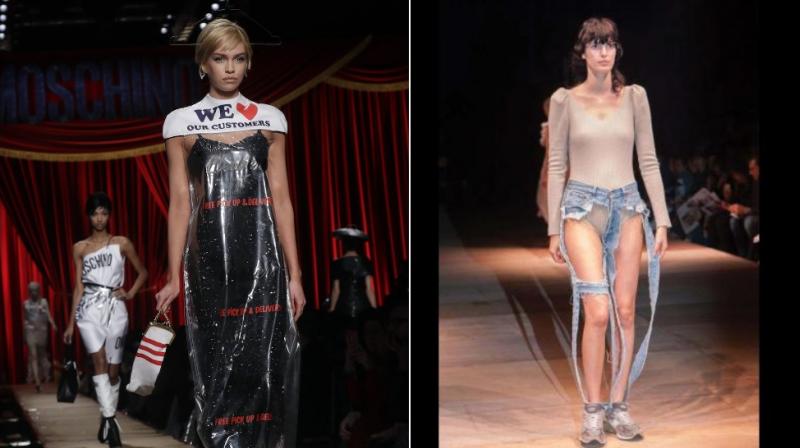 Both the dry cleaner dress and thong jeans failed to make a mark beyond the runway this year. (Photo: AP)

Let’s face it, everything that designers envision for the runways do not necessarily work in real life. While they might seem bold, risky and avante-garde for their moment under the glare of paparazzi and critics alike, they often do not turn into practical or wearable options to be kept in the closet for everyday wear. Similarly, other fashion trends that suddenly turn into a fad too do not work in the long run.

The Moschino's dry cleaner dress did not work. Neither did Balenciaga's car mat skirts manage to ‘vroom’ into people’s houses. Similarly the Double jeans, Thong jeans, Crotchless jeans or Clear jeans were a bit too radical for normal people to wear in their everyday lives. Similary, nose hair extensions, or even glitter vaginas failed to make their mark.

Four designers share their views on what worked and what did not in the world of fashion in 2017.

Designer Varsha Wadhwa says a lot of jeans did not work in 2017.

“Double jeans, muddy jeans, detachable jeans, jeans with clear knees, but worst of all, thong jeans! - an absolute no no”

She further adds, “Pyjamas as evening wear too did not work. Sure the lingerie trend is sexy to wear, but pyjamas just makes one look like a slob if you don't look like Gigi Hadid!”

Furthermore, according to her, Fanny Packs too was a mistake.

“We are obsessed with the 90's but come on - why would you add an extra bit of bulge in the area you're trying to look slim in” she asks, adding, “Cropped flare jeans too did nothing to flatter any body type.”

According to Vidhi Wadhwani, creator of Oceania, the cold-shoulder trend, print on print, hi-shine/ Metallics in fashion and makeup both, More-is-more trend as opposed to the Normcore trend last year and plaid/checks and ruffles all worked in 2017.

Speaking about the spectacular fashion failures, she critiques, “The trends that did not work included the grunge look, the black lipstick, platform heels and the trend of being size Zero.”

According to fashion designer Chandi Sahi trends that did not work included low waist pants.

“They simply did not make a cut as compared to the high waist trousers and paper bag waists,” she elaborates, adding, “The skinny jeans didn't get as much attention when the bootcut and flared jeans came into trend as well.”

“Creeper shoes also that trended a lot were suddenly pulled back this year,” she opines.

Chandi Sahi says, “The trends that worked this year included the 70's and 80's era look that might continue next year as well.”

Other trends that worked according to Sahi were, fishnet stockings, Layering and robes and nightwear worn as daywear as well.

Owner of L’Mane, Lina Mane says that athlete inspired style ruled the charts when it came to fashion that worked. She went that torn denim, vintage tasselled couture dress, statement t-shirt were other trends that worked. She further agreed with other designers in saying that crop tops and high waist pants worked this year

As 2017 comes to an end, one can see a general pattern to what designers found failing when it came to fashion this year. Lina Maine concludes the soft lingerie look, pyjamas as day wear, clear plastic pants, platform sneakers and torn t-shirts with holes failed to transcend beyond runways and fashion niches, as the year came to an end.